In Exodus 23:21 what does “Do not rebel against him; he will not forgive your rebellion, since my Name is in him” mean?

NIV Exodus 23: 20“See, I am sending an angel ahead of you to guard you along the way and to bring you to the place I have prepared. 21Pay attention to him and listen to what he says. Do not rebel against him; he will not forgive your rebellion, since my Name is in him.

Paul seems to suggest that this angel is the preexistent Christ:

NIV 1 Cor 10:9 We should not test Christ, as some of them did--and were killed by snakes.

What does it mean that he has God's name "in him"? How does that relate to him not forgiving?

Is this in any way connected to the concept of the unforgivable sin?:

The phrase הִשָּׁ֧מֶר מִפָּנָ֛יו is "Watch out in his presence", or "Be careful of him". The NIV elides this phrase with the next, וּשְׁמַ֥ע בְּקֹל֖וֹ, "and listen to his voice", which means "do what he says" to get "Pay attention to him and listen to what he says.". I see no indication in the text for this elision. The readers marks indicate separate phrases and there is a conjunctive vav joining them, indicating that they are two separate phrases. The meaning is also more forceful than the NIV presents, it is a warning:

The next phrase אַל־תַּמֵּ֣ר בּ֑וֹ, uses the root מ־ר־י/ה which does mean to rebel, though the behavior to which the writer is referring to is actually "disobedience". The usage of this term here and in Deuteronomy 31:27, Nehemiah 9:17, Ezekiel 44:6, and I Samuel 15:23, is close to being oratory hyperbole. So the meaning of the verse to this point is:

Watch out for him and do what he says! Do not disobey him...

The phrase כִּ֣י לֹ֤א יִשָּׂא֙ לְפִשְׁעֲכֶ֔ם is "because he will not carry your crimes", meaning "he wont tolerate your crimes", let them slide, or ignore them. The use of פשע (crime) here is also oratory hyperbole. The intent is "transgressions". There is no connotation of not forgiving (which would use a word such as כפרה or סליחה) in לֹ֤א יִשָּׂא֙ לְפִשְׁעֲכֶ֔ם, only that they wont be tolerated, i.e. they will incur punishment. It is not clear how the NIV arrived at the "not forgive" translation choice, especially in view of the fact that "forgiveness" is such a theologically loaded word. It is also not clear how the NIV arrives at "your rebellion" for פִשְׁעֲכֶ֔ם while using "rebel" for אַל־תַּמֵּ֣ר earlier in the verse, when the Hebrew roots are so different. My translation to this point is:

Watch out for him and do what he says! Do not disobey him because he will not tolerate your transgressions...

The phrase כִּ֥י שְׁמִ֖י בְּקִרְבּֽוֹ, "because My name is among him" or "in him" is a phrase that indicates that the authority of God is invested in the angel or messenger. Compare a similar usage in the priestly blessing, Numbers 6:27. The complete verse is therefore:

Watch out for him and do what he says! Do not disobey him because he will not tolerate your transgressions, [because] My name is invested in him.

This verse, when read in the MT and when properly translated does not imply the existence of any unforgivable transgression. The MT Hebrew of this verse does not present any problems in grammar, composition or theology. It is simple and straightforward.

In Jewish (or Semitic) culture, someone's 'name' was their authority, reputation or their status. For lack of a better description, they were their 'name'. It wasn't just the word you use when you address them—and was seen as a distinct thereto, insofar as it could function without mention of a specific 'word'.

As such, when this angel 'had' יהוה (YHVH), God's name (Isa 42:8), He was, for all intents and purposes, YHVH Himself—more than a mere representative or 'common angel.'1

Although the identity of the angel is unknown, we have two great candidates:

Of these two, the latter is the most likely candidate by far, for we see in Scripture elsewhere his perogatives are those of God: that is, wherever we read of the Angel of the LORD in Scripture, he is [simply interchangable with YHVH/God Himself most of the time.2

The example you give is a key one; elsewhere it is a key description and perogative of the Jealous God Himself (Ex 34:14), YHVH (notice that this characteristic distinguishes Him as God, since we are to recognize by it that He is a just, or jealous, God):

Then Joshua said to the people, "You will not be able to serve the LORD, for He is a holy God. He is a jealous God; He will not forgive your transgression or your sins.3

As for the passage in 1 Corinthians 10:9, it is a reference to the comparison made between trust in and fidelity to Jesus for salvation, and the sign unto which they were to look (a pole with a serpent upon it) who wished to be saved from the judgement of God (in the form of venomous snakes):

The people spoke against God and Moses, "Why have you brought us up out of Egypt to die in the wilderness? For there is no food and no water, and we loathe this miserable food." The LORD sent fiery serpents among the people and they bit the people, so that many people of Israel died. So the people came to Moses and said, "We have sinned, because we have spoken against the LORD and you; intercede with the LORD, that He may remove the serpents from us." And Moses interceded for the people. Then the LORD said to Moses, "Make a fiery serpent, and set it up [for a sign]; and it shall come about, that everyone who is bitten, when he looks at it, he will live." And Moses made a bronze serpent and set it up [for a sign]; and it came about, that if a serpent bit any man, when he looked to the bronze serpent, he lived.

To which Jesus makes reference in John 3, comparing Himself as the hope of their eternal salvation to the serpent upon the pole ('lifted up' meaning to be crucified on a cross) which was for them their hope of temporal salvation:4

As Moses lifted up the serpent in the wilderness, even so must the Son of Man be lifted up; that whosoever believeth in him, may not perish; but may have life everlasting. 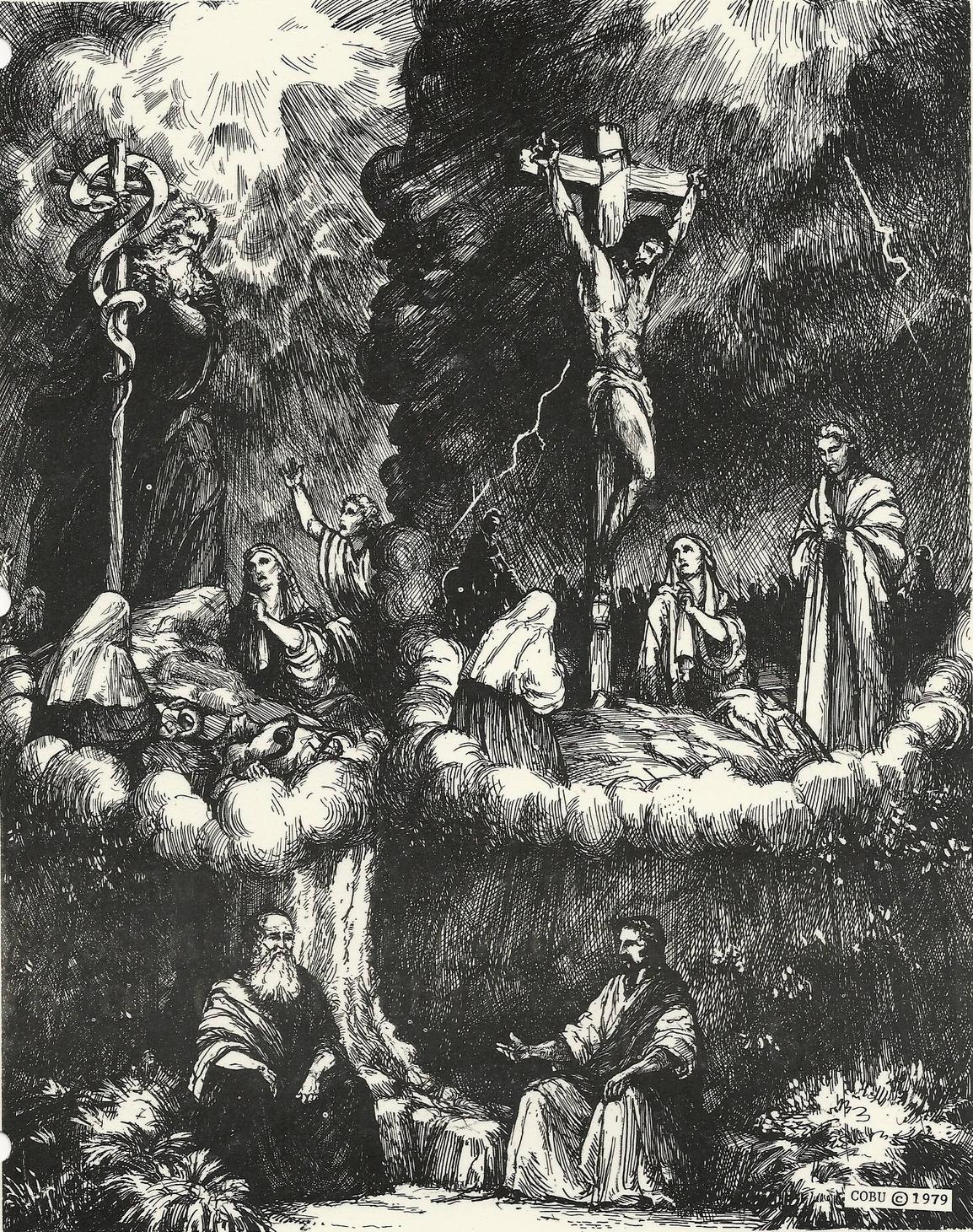 However, it's not necessary to take St. Paul to be saying that those who tempted God in the desert were tempting Christ, since the text itself only describes a certain punishment (a judgment of some kind) for a certain fault (tempting the Lord): that is, the example is analogical, not specific.

The Greek of 1 Corinthians 10:9 can be translated as follows:

Let us not tempt Christ [or, the Lord] 5 as they tempted [the Lord? Christ?—doesn't matter; doesn't specify] who perished by [the venomous] serpents.

"As Moses..so the Son of Man.." Jesus could be being compared to Moses in the role of chief intercessor, since both "the LORD" and "Moses" were 'tempted' (Num 21:5a).6

The so-called unforgivable sin is not unforgivable on the part of God, neither is He unwilling or unable to forgive such sins (nor again is Christ and the Holy Spirit of a different dignity or whatever else—note that 'Son of Man' is a title of "the man Christ Jesus" 1 Tim 2:5b): it is precisely on the part of the sinner, who "offers an affront to the Spirit of grace" Heb 10:28-30 who cannot be forgiven for that very reason—he has pushed aside forgiveness itself; he has apostatized. Because it is the Spirit who administers forgiveness: Jn 20:22-23; Mk 3:30. One will note well that Christ elsewhere states that apostasy or denial of the faith is unforgivable, for example, and that Luke puts this right in the context of the unforgivable sin (Lk 12:9).

If God's 'jealously' or His justice are connected with 'not forgiving' transgressions against him (whereas an angel might do so), which I beliebe is borne out by the texts linking them, then His warning might simply be to identify the angel as that Angel of the LORD who, as said before, is virtually synyonmous and identical with YHVH Himself—as מלאך יהוה. By ascribing to him His own perogatives with which they ought to be familiar.

1 Hebrews, for example, which describes the Son as the intrinsic expression of the eternal God (1:3), gives to Jesus the Name proper to God alone "the name above every name"—LXX Kyrios which however answers to the Tetragrammaton in the Masoretic (Heb 1:4,10; cf. Phil 2:10; Jer 23:6).

5 [See NA27 variants] There is a variant in 1 Cor 10:9—..should not test τὸν κύριον |or| Χριστόν (the Lord |or| Christ). For the purposes of the answer, either could be referring to the preincarnate Son, as each are proper titles thereof.

In Exodus 23:21 what does “Do not rebel against him; he will not forgive your rebellion, since my Name is in him” mean ?

Paul seems to suggest that this angel is the preexistent Christ.

In Exodus, or in Paul ? (After all, Moses and Paul are two different persons). Make up your mind, and let us know.

What does it mean that he has God's name “in him” ?

In this case, however, the angel (meaning messenger or emissary) in question is none other than Joshua (Yehoshua), to whose name the same observation also applies, and who has brought the Israelites to the place that the Lord has prepared for them (Exodus 23:20), since Moses, the main character of Exodus, perished in the wilderness (Deuteronomy 34:5), and did not lead his people into the Promised Land, which task the son of Nun performed. (Compare also the following three passages : Exodus 23:23, Deuteronomy 31:3, Joshua 3:9-10).

Historically, Christians did indeed view Joshua as an allegory for Jesus (both names are spelled the same in the Koine Greek of the Septuagint and New Testament), but, as I've already pointed out above, I am not sure as to what exactly you are actually asking in this question.

How does that relate to him not forgiving ?

It doesn't. That he will not forgive their rebellion, and that he bears God's name, are merely two very good reasons as to why they should not rebel against him in the first place.

The bracketed clause serves merely as an extra reason for justifying the third imperative verb specifically, as opposed to the more general one, applying equally to all three instructions, and not just one in particular.

Is this in any way connected to the concept of the unforgivable sin ?

Eisegetically, the sky is the limit; exegetically, however, the text simply says that he will not be lenient with them, or take their disobedience lightly.

Not the answer you're looking for? Browse other questions tagged 1-corinthians exodus angels forgiveness or ask your own question.