Did Paul contradict himself on the works/faith dichotomy?

At Romans 2:6-7 Paul seems to say that salvation can be earned by works.

**RSV:**For he will render to every man according to his works: to those who by patience in well-doing seek for glory and honor and immortality, he will give eternal life.

At Romans 4:4-5 he says that justification is received as a gift apart from works.

**RSV:**Now to one who works, his wages are not reckoned as a gift but as his due. And to one who does not work but trusts him who justifies the ungodly, his faith is reckoned as righteousness.

How can these statements be harmonized.

Forgive the shortcomings of my chart-creation skills, but St. Paul's teaching on salvation conveys the following: 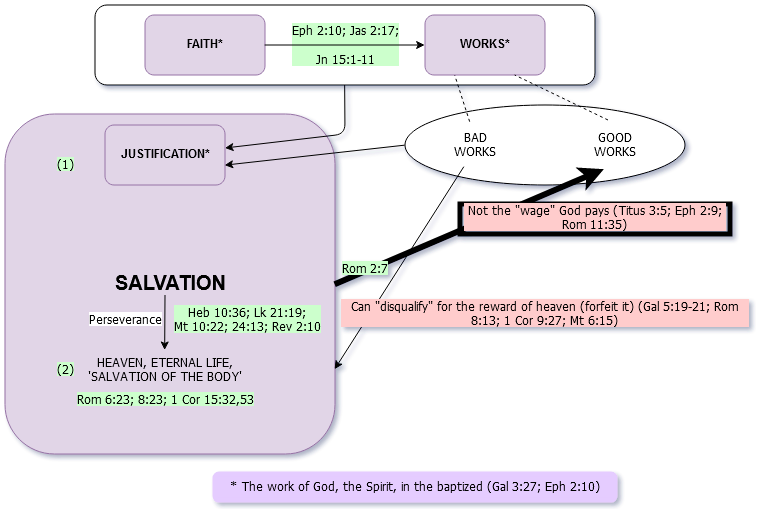 Thus, Romans 2 and 4 do not contradict:

For he will render to every man according to his works: to those who by patience in well-doing seek for glory and honor and immortality, he will give eternal life

While "he will render to every man according to his works" may at first seem ambiguous (i.e. some might take it to refer to some kind 'reward'in heaven), the next part is the explanation of what he means, using μεν as a kind of 'colon' or id est.

Now to one who works, his wages are not reckoned as a gift but as his due. But to one who does not work but trusts him who justifies the ungodly, his faith is reckoned as righteousness

St. Paul is drawing as sharp a contrast as he can between seeing salvation (which he has described amply elsewhere as including intrinsically, works) as a wage, meaning God in fact owes salvation to you for your good works, which is false (Eph 2:8-9; Titus 3:5) and a reward by the mercy of God for following Christ. Salvation is certainly not proportional to any works we can do: how could it be our "due"?

In other words, St. Paul is railing against any kind of 'works = (proportional to) salvation' instead of the orthodox 'works are necessary for salvation.'

Fuel is necessary for a car to do its purpose; works are necessary to "complete" faith (Jas 2:22), i.e. make it properly speaking 'faith,' a viable means to be justified. But you need an agent in both cases to take the 'fuel'/faith somewhere, i.e. follow Christ/do good works. Otherwise, the faith will be "dead" (Jas 2:17).

There is no contradiction in those two passages. In Rom.4:6, the apostle uses David to show that David also affirms that righteousness is not of works when he speaks in Ps.32:1-2 of the blessedness of the man to whom God credits righteousness [Rom.4:11-12]--thus being justified [Rom.3:28] and forgiven [Rom.4:7-8]) apart from [or, without] works.

But "if you are saved and you know it, then your life will surely show it; and as James (and Paul) point out, genuine faith results in genuine works.

Paul tells the church here, especially the Jews: Because of your stubbornness and unrepentant heart [Lk.13:1-9], you are laying up wrath for yourself on the Day of Wrath and the revelation of the righteous judgment of God, as Paul affirms in Ps.62:12: God will give to each person according to his deeds [cf. Rev.20:11-15].

That we will be judged according to our works is clear throughout Scripture. This is affirmed in numerous places in Scripture besides Romans 2:6 (all translations are from RSV):

To thee, O Lord, belongs steadfast love. For thou dost requite a man according to his work.

For according to the work of a man he will requite him, and according to his ways he will make it befall him.

For the Son of man is to come with his angels in the glory of his Father, and then he will repay every man for what he has done.

And the dead were judged by what was written in the books, by what they had done (κατὰ τὰ ἔργα αὐτῶν - lit. "according to their works")

Behold, I am coming soon, bringing my recompense, to repay every one for what he has done.

Now to him that works (lit. "the working one")

the reward is not reckoned according to grace

but according to debt

but to him that works not

but is believing in the one justifying (or, making righteous) the ungodly

his faith being reckoned for righteousness

First, we should note that Romans 4:4ff is not talking about works (ἔργα) in general, but rather specifically the works of the law. This is made perfectly clear in 3:28:

For we hold that a man is justified by faith apart from works of law.

Second, we should also note that "justify" (δικαιόω - dikaioō) does not mean "save" and that "justification" (δικαιοσύνη - dikaiosynē) is not synonymous with salvation, despite the fact that some lexicon's will even go so far as to translate dikaioō as "declare righteous".* "Save" is one thing (σῴζω - sōzō) in Greek, "justify" (δικαιόω) is another; "Salvation" (σωτηρία - sōtēria) is one thing in Greek, "justification" (δικαιοσύνη) another. We might impute synonymous meanings to these these words in English, but what we may impute to the English words does not affect the meaning of the underlying Greek words they translate.

Once (1) works of the law is understood to be something distinct from works in general; and (2) "justification" is de-conflated with "salvation", no contradiction between the two passages remain.

As Paul says salvation is all of Grace. We are not saved because of our good works. Yet works is faith expressed. Genuine faith is expressed in Good works otherwise it is counterfeit.

To get the whole context let us look at it with othe scriptures:

10 Believest thou not that I am in the Father, and the Father in me? the words that I speak unto you I speak not of myself: but the Father that dwelleth in me, he doeth the works.

11 Believe me that I am in the Father, and the Father in me: or else believe me for the very works' sake.

He that believeth on me, the works

that I do shall he do also;

and greater works than these shall he do;

because I go unto my Father.

14 Who gave himself for us, that he might redeem us from all iniquity, and purify unto himself a peculiar people, zealous of good works.

12 Buried with him in baptism, wherein also ye are risen with him through the faith of the operation of God, who hath raised him from the dead.

13 And you, being dead in your sins and the uncircumcision of your flesh, hath he quickened together with him, having forgiven you all trespasses;

14 Blotting out the handwriting of ordinances that was against us, which was contrary to us, and took it out of the way, nailing it to his cross; The works are an evidence of the victory of Christ, who has set you free from the chain's and bondage to sin.

1 And you hath he quickened, who were dead in trespasses and sins:

3 Among whom also we all had our conversation in times past in the lusts of our flesh, fulfilling the desires of the flesh and of the mind; and were by nature the children of wrath, even as others.

4 But God, who is rich in mercy, for his great love wherewith he loved us,

5 Even when we were dead in sins, hath quickened us together with Christ, (by grace ye are saved;)

6 And hath raised us up together, and made us sit together in heavenly places in Christ Jesus:

20 I am crucified with Christ: nevertheless I live; yet not I, but Christ liveth in me: and the life which I now live in the flesh I live by the faith of the Son of God, who loved me, and gave himself for me.

21 I do not frustrate the grace of God: for if righteousness come by the law, then Christ is dead in vain. The works are evidence of a life in union with Christ. They are an evidence that you are now a servant of righteousness.

17 But God be thanked, that ye were the servants of sin, but ye have obeyed from the heart that form of doctrine which was delivered you.

18 Being then made free from sin, ye became the servants of righteousness.

20 For when ye were the servants of sin, ye were free from righteousness.

22 But now being made free from sin, and become servants to God, ye have your fruit unto holiness, and the end everlasting life.

Not the answer you're looking for? Browse other questions tagged romans soteriology or ask your own question.