Why did God give instructions about the arrangement of the Israelite tribal camps?

Numbers 2 consists entirely of God giving commandments as to how the Israelite camp should be arranged. From the NIV:

On the east, toward the sunrise, the divisions of the camp of Judah are to encamp under their standard. […]

The tribe of Issachar will camp next to them. […]

The tribe of Zebulun will be next. […]

All the men assigned to the camp of Judah, according to their divisions, number 186,400. They will set out first. […]

[The rest of the tribes are described]

It seems strange to me that God would give explicit instructions as to who should be camped next to whom and the order they should be led, when God seems to be unconcerned with trivial details like that for the rest of the journey. For instance, he doesn't give city planning details for the cities that the Israelites eventually rule.

Considering the narrative of Numbers 2, why did God give instructions about the arrangement of the Israelite tribal camps? What purpose did that serve by having God command this arrangement, rather than leaving it up to the personal preference of the tribes to camp wherever they wanted to?

If taken literally, that is, the tribes must camp specifically in one direction, when viewed from above, the encampment could be taken as forming a cross as shown in this diagram: 1 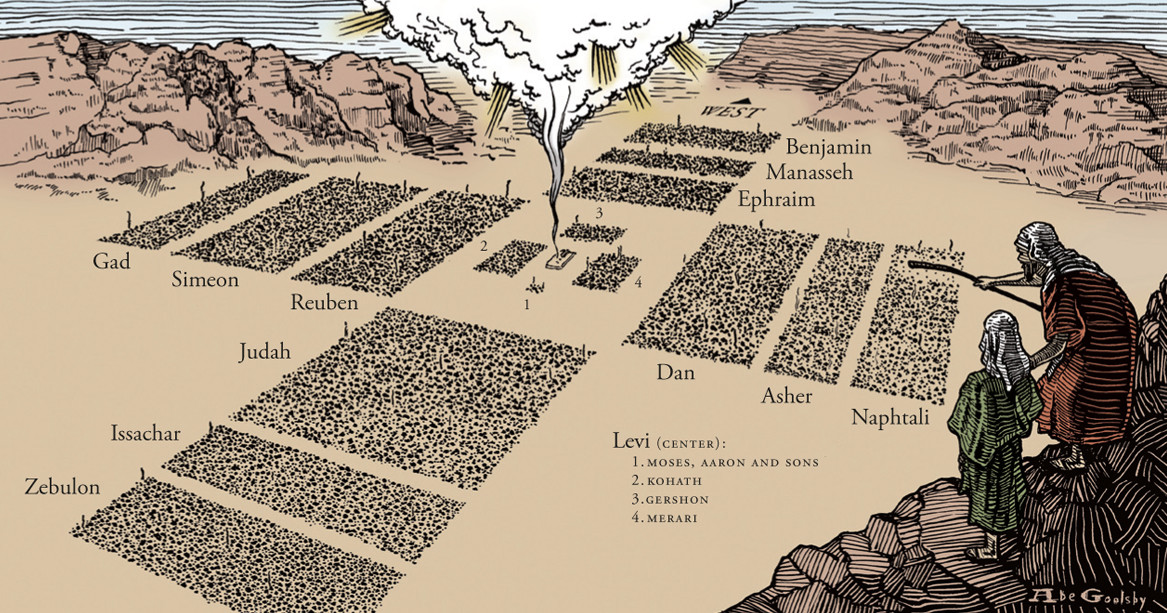 However, the individual totals can be depicted as shown, yet the totals along the two axis (see below) do not agree with this picture. The East/West axis (representing the upright) totals 294,500 and the North/South axis (representing the horizontal beam) totals 309,050. The horizontal representation should be longer than the vertical. In addition, if the encampment arrangement is patterned after the order when the people move, the tribe of Judah is misplaced: Judah leads out and should be furthest from the center, not the closest.

More practical would be to take the instructions to mean in the East, in the South, in the West, and in the North. Then the encampment could be pictured like this: 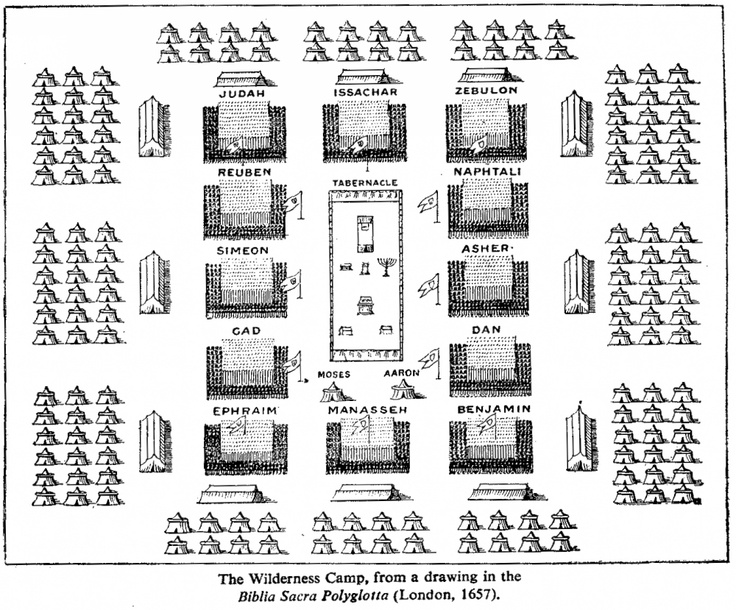 Unlike the "cross" arrangement which places some tribes much further from the center, this arrangement has the benefit of locating everyone closest to the Tent of Meeting. It also fits how some events are described. For example, Aaron ran through the camp with incense (Numbers 16:46-47). Finally, when everyone moved, Judah could lead (Numbers 2:9) and the other tribes could follow in a single column, the most likely way of moving.

When a tribe's mother and birth order is factored, there is a distinct pattern:

If you do the math, you'll find that the greatest number of people were on one side of the tabernacle with the least amount of people directly opposite on the other side. The two remaining sides had roughly equal numbers. Thus, the view from the air would be the form of a cross! Pretty cool, huh? al

I think the whole process indicates order. I am not sure the cross model is relevant. All tribes around the tabernacle seems more appropriate, with the order of breaking camp and movement. Rajaratnam Abel March 17, 2020.

The cross model is very vital in the arrangement of the camp and the tribes. The reason being that at the center of the cross arrangement( where the Tabernacle/altar was stationed to be administered by the Levi) there was a revelation which foreshadowed the sacrificial offering that will be performed on the the cross of Calvary in which Jesus Christ will be the once and for all ultimate sacrifice. Secondly, the cross model and the pattern was a symbolic guarantee for there security against the attack of the enemies throughout their journey to the promise land. Their failure to maintain that specific pattern will make them vulnerable in my own opinion. Thirdly, the cross model of the pattern of the camp was an indication which foreshadowed that out of the tribes of Israel the sacrificial Lamb of God will come from within the tribes and this was Jesus Christ who came out of the tribe of Judah as the Lamb of God which took away the sin of the world.

Johnson AkinfenwaJohnson Akinfenwa
1
1
Add a comment  |
-1
Want to improve this post? Provide detailed answers to this question, including citations and an explanation of why your answer is correct. Answers without enough detail may be edited or deleted.

Beyond the rather cool pictorial representations though, this layout brings to fore the discourse around God's desire for structure and order within the ranks the NT Church and the centrality of the Presence and Spirit of the God as symbolised by the Tabernacle to the daily existence and culture of the church, as symbolised by Isreal in this case. This is an issue we still struggle with in our worship services and church organisations today. How much say so do we give the leading and manisfestation of the Spirit relative to our own pre-conceived 'order of service'. Who is at the centre of our local Church structure, the ego and whims of the Senior Pastor or the Holy Spirit? With all the denominations and sects, where is the overarching governance Structure like in the early NT Church?

Not the answer you're looking for? Browse other questions tagged israel numbers or ask your own question.

8
Did Moses need a human guide in the wilderness?
3
What were the four standards around which the tribes of Israel were camped (Numbers 2:1-34)?
3
How many rods did Moses take into the tabernacle in Numbers 17?
3
Theory to explain ordering of tribes in Numbers 13
4
Why are there 12 tribes of Israel and not 13?
6
How to understand John 4 in light of Exodus 17 and Numbers 20?
1
Who is Reuben's tribal head upon entering the promised land?
4
What is the relationship between Ezekiel’s vision of Jerusalem and the 12 Tribes with the vision in Revelation 7 and the 144,000 from the 12 Tribes?
2
Why did God tell Moses to scout the land whether it was good or bad in Numbers 13:19?