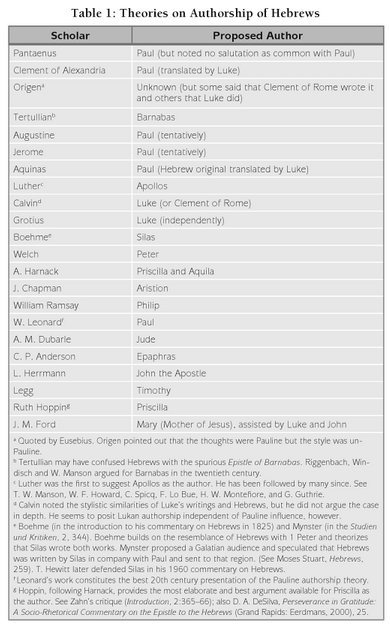 6
Is there a case to be made that Luke wrote the book of Hebrews?
7
Did Luke have a priestly source?
4
Is conscience (συνείδησις) a particularly Pauline idea?

3
In Hebrews 1:9, who are the "companions" and were they also anointed, just less so?
1
In Hebrews 13:9, is the author saying that kosher laws are useless and pointless?
4
Who was the author of Mark?
0
Who was the original audience for the story of Job?
4
Who are the "tortured and refused their release....world was not worthy of them" people in Hebrews 11:35?
1
In Hebrews 12:23 who are "the gathering of the firstborn [plural]"?
6
According to Acts 21:17-26 are the Jews who are under the New Covenant bound to keep the law of Moses for any reason?
2
What did the author of "To the Hebrews" mean by the expression: " Who maketh his angels spirits, and his ministers a flame of fire." (Hebrews 1:7)
7
Was Papias the scribe who wrote the Gospel of John?
10
“You are my Son, today I have begotten you” - what are the meaning and implications of the word "today" in the context of Hebrews 1:5?