In Ezra 10:44 did they keep the children or send them away with their wives?

In Ezra 10 the Jews repent of having taken foreign wives and decide to "put them away" even if they had children by them. There seems to be a translation issue as to whether or not the children were also sent packing. Were they sent away? 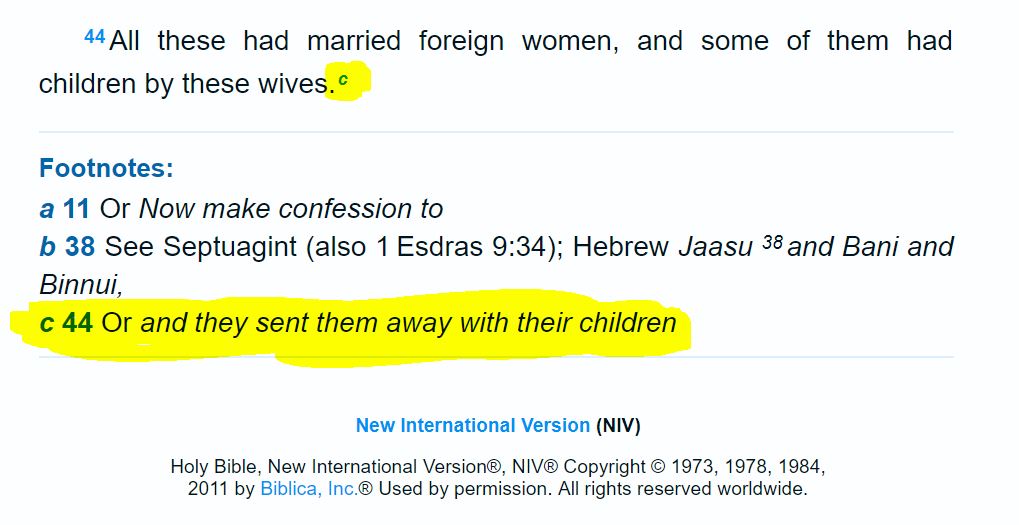 [3]Let us now make a covenant with our God to divorce our pagan wives and to send them away with their children. We will follow the advice given by you and by the others who respect the commands of our God. Let it be done according to the Law of God.

[5]So Ezra stood up and demanded that the leaders of the priests and the Levites and all the people of Israel swear that they would do as Shecaniah had said. And they all swore a solemn oath.

Since Shecaniah had proposed that it be done according to the law i.e "bill of divorcement"(Deut 24:1-2)

It would seem they did eventually put away their foreign wives & children after taking an oath to do,but they did it gradual.

Here we have the problem of foreign culture. If like Ruth who becomes a convert to worship God, 'Ger' in Hebrew. She becomes the example of the correct convert, "your God is my God, your people my people" she says with faith. A bad example is the forced conversion of the Edomites was a couple of generations before Herod. Mass conversion but they were still foreign, they kept a few commandments but really did what was right in their own eyes. With Ezra sending away foreign wives these would not be converts only superficial conversions, easy to see if they kept their pre conversion culture. The great claim of Jewish marriage is you need a Jewish mother to be Jewish. So the children went away with their mostly pagan mothers. Culture maybe in the Fathers hands, but upbringing comes from our moral mothers.

Not the answer you're looking for? Browse other questions tagged hebrew ezra or ask your own question.

4
Were the men in Ezra 10:3 breaking marriage covenents by divorcing their foreign wives?
10
Why would Darius be called king of Assyria?
2
Who is the desolate one and who is the one who is married in Isaiah 54:1?
8
To what extent was the LORD “sought” and “found” in Isaiah 65:1?
5
Did Ezekiel warn the just in Ezekiel 3:20?
4
Was Ezra 7:27 intended to indicate fulfillment of a prophecy from Isaiah 60:7?
3
Why is the end of 2 Chronicles almost word-for-word identical with the first few verses of Ezra?
3
Did Moses have horns according to Exodus 34?
5
Reason for old men weeping in Ezra 3