While reading 1 Chronicles 28:19, part of the Hebrew gave me troubles. Likewise, it is handled differently across translations.

"All this," said David, "the LORD made me understand in writing by His hand upon me, all the details of this pattern." (NASU)

"All this," David said, "I have in writing from the hand of the LORD upon me, and he gave me understanding in all the details of the plan." (NIV)

The highlighted words come from hiskyl, the hiphil perfect third masculine singular form of sakal. In the hiphil, the verb means "cause to understand." My still-rough translation of the verse follows:

The whole in writing from the hand of YHWH upon me, he made me understand--all the work of the plans.

Because the athnach is under hiskyl, I am loathe to put the verb with the second half. If I did, my translation of the verse would read similar to the NIV.

The whole [is] in writing from the hand of YHWH upon me. He made me understand all the work of the plans. [translation mine]

I have also tried reading it with the first piece being the subject. However, "The whole in writing from the hand of YHWH upon me" does not read well as the subject of hiskyl. In that case, hacol would be the subject, and I am not sure it works like a noun.

Placing the verb at the beginning would render the verse

He made me understand the whole in writing from the hand of YHWH upon me! All the works of the plans! [translation mine]

The Hebrew does read as if David's excitement is coming through. The last clause appears to be a fragment.

The whole [is] in writing from the hand of YHWH upon me. He made me understand! All the work of the plans! [translation mine]

The last is where I currently lean, but I am not sure the accent marks will allow it. The accent on "upon me" is munach, which is the strongest conjunctive accent marker in Hebrew. If there are good arguments for ignoring the conjunctive munach tying the "upon me" to hiskyl, I am open to them.

What would you do with the hiskyl in this verse? How would you translate the verse and why?

This verse was not considered particularly difficult to understand by the classical Jewish commentators. Two points that they found worthy of comment are:

The MT phrasing of verse 19 according to the taamim is:

This reading is according the to the reading tradition that an atnach at the end of a verse followed only by a phrase without a verb, is a soft or short (כסרה) atnach1, 2 and not a full atnach (which is similar to an end of verse verse break) and the final phrase is understood as parenthetical. This reading tradition is preserved today in the (pre-Tiberian) Yemenite reading tradition today and is the tradition in which I read in public readings in the synagogue. An example of a similar verse with an kasra atnach from this week's reading is Deuteronomy 21:2 (MT):

So there is no room for translating anything like "the LORD's hand on me" or "the LORD guiding" me". If the munach before עלי doesn't make this clear then the tifha under "the LORD" should.

So, you can go ahead and read:

All [of the plan] in writing, from the LORD's hand

[He] explained4 to me, all the works of the plan

To render this into palatable English,

All of this in writing from the hand of the LORD, He explained to me in all its details

Here I am translating כל מלאכות התבנית, referring to "the works of the" plan, as meaning the details, and preserving both of the כלs in translation.

1. Mira Shpigel, (Modern Hebrew) The Yemenite Formulation of the Torah Reading, Yitzhak Ben-Tzvi Institute, page 50 (page 8 of the PDF file) ordered list item ח at the bottom of the page.

3. See the RADAK on עלי in this verse

4. Or "made understood to me". English has no way to use "understood" in an active way to mean conveying understanding to someone.

The Targum Chronicles seems to clarify the Hebrew.

The term in bold is the Aramaic ethpaal infinitive, which is translating the Hebrew hiphil perfect third masculine singular form of sakal, and so the literal yet very sensible translation from the Targum into English might appear as follows.

Targum Chronicles (I) 28:19
Everything written by the Lord's hand laid on me to understand every detail of the design.

The Aramaic provides the nuance that divine inspiration was the "hand" leading David both to write and to understand. Bible scholars have made the similar observation.

Before addressing he Hebrew, Keil and Delitzsch (1872) make the correct observation that the term עָלַי (alai) is not the object of the verb הִשְׂכִּיל (hiskyl), and so must be understood differently.

It is, however, a question with what we should connect עָלַי. Its position before the verb, and the circumstance that הִשְׂכִּיל construed with עַל pers. does not elsewhere, occur, are against its being taken with הִשְׂכִּיל; and there remains, therefore, only the choice between connecting it with מִיַּד יהוה and with בִּכְתָב.

Now when the Masoretes codified the Hebrew Bible in the Ninth and Tenth Centuries, they assigned cantillation to aid in understanding the structure of Hebrew verses among other reasons. The following schematic diagram depicts the structure of the logical divisions. Please click to enlarge.

So if we use Targum (and the comments from Keil and Delitzsch) to guide the translation, the first half of the Hebrew verse might appear as follows in English:

1 Chr 28:19a
Everything written by the Lord's hand upon me clarified...

1 Chr 28:19
Everything written by the Lord's hand upon me clarified the details of the layout.

Again, Keil and Delitzsch make the correct observation that the idea here is divine inspiration (similar to the Targum), which enabled David not only to write out the blueprints of the Temple but also to understand the purpose and intent of the Temple layout.

David therefore says that he had been instructed by a writing resting upon divine inspiration as to all the works of the pattern of the temple. This need not, however, be understood to mean that David had received exemplar vel ideam templi et vasorum sacrorum [ed. trans., model or an idea of ​​the Temple and the sacred vessels] immediately from Jahve, either by a prophet or by vision, as the model of the tabernacle was shown to Moses on the mount (Ex. 25:40; 27:8); for it signifies only that he had not himself invented the pattern which he had committed to writings, i.e., the sketches and descriptions of the temple and its furniture and vessels, but had drawn them up under the influence of divine inspiration. [emphasis added]

From my inexpert point of view (FWIW), I see the Hebrew of 1 Chronicles 28:19 like this:

Everything in writing from the hand of the LORD, he taught me before ‒ all the details of the plan. 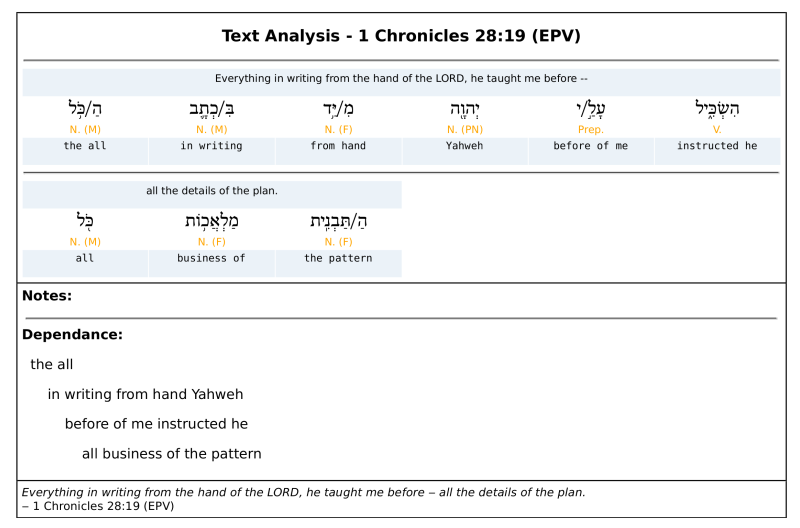 According to this, the writing that David speaks of in 1 Chronicles 28:19 (or parts of it) was found by Josiah, and formed the basis of the restoration of the Temple practices during his reign.

Not the answer you're looking for? Browse other questions tagged hebrew 1-chronicles or ask your own question.

7
Sacrificing and kissing calves in Hosea 13:2
8
Psalm 72: "he will ..." vs. "may he..."
18
The lexicology of Pharaoh's heart
3
Joseph's proclamation while riding in the chariot in Egypt
4
Why is this verb "לַעֲשׂוֹת" infinitive? (Gn 2:3)
3
"Let there be light," or "He is becoming light?"
2
Why is there no pronoun attached to the reflexive 'abhor' of Job in 42:6?
4
Tetragrammaton originally יהיה (yihayah) (3PersMascSing 'exist, be') and subsequently the nominal form (יהוה) (the Being)?