I've read that this is a grammatically incorrect because b'reshit does not have a definite article and the word order is wrong. Literally translated, this would say:

In first/beginning created God, the heavens (et) and (et) the land

It seems as though this should be interpreted as:

Afterwards, we are told the land is chaotic until God said "Let there be light". The only thing I can figure is that the first thing was chaotic matter that eventually brought about God. He then proceeded to bring order to this chaos with light.

This would also agree with the cosmologies of several early religions such as the Sumarians, Babylonians, and the Greeks- though they all made chaos out to be a conscious god rather than an unconscious, constant movement of matter.

And they wrote for him: God created in the beginning [bereshit], reversing the order of the words in the first phrase in the Torah that could be misinterpreted as: “Bereshit created God” (Genesis 1:1). They did so to negate those who believe in the preexistence of the world and those who maintain that there are two powers in the world: One is Bereshit, who created the second, God. And they wrote: I shall make man in image and in likeness, rather than: “Let us make man in our image and in our likeness” (Genesis 1:26), as from there too one could mistakenly conclude that there are multiple powers and that God has human form.

Is it true that the first words in Genesis could be interpreted to say that God was prepared in the first? Have any other commentators mentioned this?

1. The actual quotes from the Talmud are indicated here in italics. The rest is the amalgamation of the Rashi and Tosafot medieval commentaries, which each present different reasons for the word order switch, plus supplementary modern commentary by Rabbi Even-Israel

The word בראשית means "In the beginning" and you get it by combining the prepositional prefix ב with a noun form derived from the root ראש. This is not only the first word in the chapter, but also the Hebrew name for Genesis. The word ברא means "created" and אלהים means God.

Since אלהים is a definite noun, you would expect a direct object marker were it a direct object. It is not required, as Susan points out, but you would expect the author to add the marker if only for the sake of clarity. As far as word order goes, it is common to put the verb in front of the subject. Read further down and you will see this happen time and again, especially with vav-consecutive verbs that begin verses, e.g. Gn 1:3 ויאמר אלהים יהי אור ויהי אור And God said, "Let there be light." And there was light. 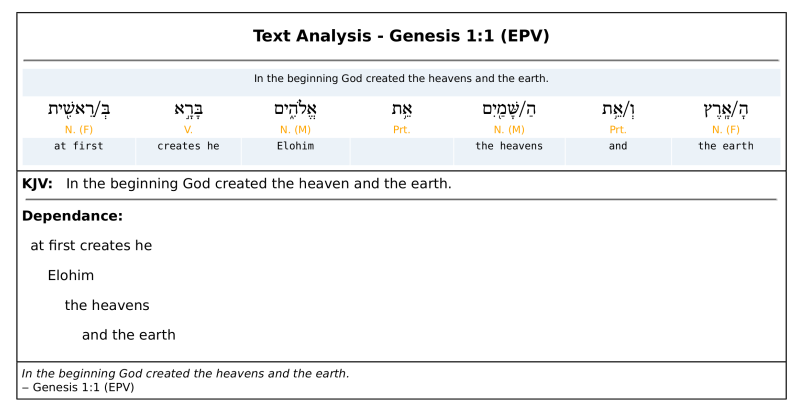 If it were suggested that בְּרֵאשִׁ֖ית בָּרָ֣א אֱלֹהִ֑ים might be translated "In the beginning he created God, the heavens, and the earth.", then one would:

There is nothing mysterious about Genesis 1:1, where Elohim (God) is clearly being identified as the Creator, not the created.

אלהים is one of God's names used during the actualization of potential (or put differently, acting via the usual laws of nature he created, which is less relevant in this context).

It is true that it is an odd phrasing from a grammatical point of view, but this phrasing sheds light on other aspects of what was happening during the creation (expounded upon by the mystics).

To explain the section of Talmud you quoted: it is saying that it could be misinterpreted because without the word את the subject and object can be reversed, grammatically speaking. (In hebrew, the word את makes the order unambiguous, and without it the phrase needs to be understood in context or using other cues.) However, as explained above and by others, a basic familiarity with hebrew makes it clear that it is not a correct understanding. Basically, what it's saying is that God is allowing room for someone who is not intellectually honest and has an agenda to misunderstand it this way, to do so.

The following is not necessarily my “answer” to the question but instead a possible interpretation of the verse when Elohim is considered the object rather than the subject.

Genesis 1:1 In beginning He created Elohim the heavens and the earth.

In the beginning, (the “He” …as in God and not the “beginning”) created Elohim the heavens and the earth. The beginning itself did not create the Elohim.

Here in Romans 1, it is stated that the invisible things of Him from the creation of the world are clearly seen (by mankind) being understood by the things that are made (the visible heavens and the earth).

Romans 1:19-22 KJV (19) Because that which may be known of God is manifest in them; for God hath shewed it unto them. (20) For the invisible things of him from the creation of the world are clearly seen, being understood by the things that are made, even his eternal power and Godhead; so that they are without excuse**:**

Genesis 1:1 is the only verse that represents the creation of the literal, visible universe in my opinion and the rest of the Genesis chapter 1 creation account is a parable of the recreation of man whose foolish heart was darkened (darkness was upon the face of the deep) from the clear, visible evidence that there is a God that was created by Him. Mankind is without excuse as His invisible attributes are clearly seen by those things that He made/created in Genesis 1:1.

The earth became without form (without His righteousness) and void (void of the knowledge of God even though mankind is without excuse as His invisible attributes are on display in the visible universe).

(21) Because that, when they knew God, they glorified him not as God, neither were thankful; but became vain in their imaginations, and their foolish heart was darkened.

Mankind has the visible evidence that there is a God right before his very literal eyes and yet turns away from it and goes off in his own way in his own empty imagination.

Now mankind needs the Light of the knowledge of God (let there be Light) so that the eyes of his understanding maybe opened in order to know Him.

(22) Professing themselves to be wise, they became fools,

In Him we live and move and have our being in this visible creation. The visible evidence that there is a God (I AM) is readily seen, but now the darkened heart of mankind needs the "Unknown God" explained to him in knowledge.

We are His offspring. Yet, mankind vainly worships the “Unknown God” through their respective handwritings of ordinances (dogmas) graven by “art and man’s device” in the foolishness of his heart (yet man professes himself as “wise” with his own written representations of God) so that he may worship and serve them more than the Creator.

(29) Forasmuch then as we are the offspring of God, we ought not to think that the Godhead is like unto gold, or silver, or stone, graven by art and man's device.

Thanks for reading and considering.

The original sequence with God being created was the intent of the writers. The translators try to change it, but the truth emerges. The first prime beginning created God heaven and earth. Pretty simple except for the devil. The beginning is the author of the creation. I am the alpha and omega, the beginning and the end. The Elohim are created by the beginning, a concept that requires more knowledge. Tie in the firmament and now we see a finite earth and heaven, alpha and omega. Sorry dudes your entire concept of god earth and space is wrong.

share|improve this answer
answered Feb 12 at 1:33

Not the answer you're looking for? Browse other questions tagged genesis hebrew translation-philosophy or ask your own question.