Numbers 1:4-16 lists the twelve tribes of Israel as:

Revelation 7:4-8 instead lists the tribes as:

Why does the list in the Revelation differ from the one in Numbers? The above are not the tribes of natural Israel, because there was never a tribe of Joseph, the tribes of Dan and Ephraim are not included in the list, and the Levites were set aside for service in the temple and where never considered as one of the twelve tribes.

Incongruities in lists of the tribes

As brought up in the original question, there is a traditional version of the list of twelve tribes that omits the tribes of Levi and Joseph, while including Manasseh and Ephraim. These ideas are based on Deuteronomy 18.1-2 and Genesis 48.5, respectively.

A survey of the biblical texts, however, shows it's not this simple.

The Song of Deborah in Judges 5, often regarded as one of the oldest parts of the Hebrew bible, lists the tribes of Israel: Ephraim, Benjamin, Machir, Zebulun, Issachar, Reuben, Gilead, Dan, Asher, Naphtali. Only ten tribes are mentioned, and two of those are not part of the traditional lists at all.

Ezekiel 48, dated by the author to 572 BC, lists the tribes of Israel twice. The first list, when describing their allotment of lands, yields a count of fourteen: Dan, Asher, Naphtali, Manasseh, Ephraim, Reuben, Judah, Zadok, Levi, Benjamin, Simeon, Issachar, Zebulun, Gad. Ezekiel again lists the tribes when describing the 'twelve gates' of the rebuilt Jerusalem, but he makes some changes: Reuben, Judah, Levi, Joseph, Benjamin, Dan, Simeon, Issachar, Zebulun, Gad, Asher, Naphtali. The first of these two lists notably distinguishes the Zadokites from the Levites. This second list excludes Zadok and Manasseh, but includes Joseph, and Levi is counted as one of the twelve tribe.

In fact, the lists of the tribes differ from each other several times throughout all across the bible. Sometimes this difference is in their order. Sometimes traditionally recognized tribes are excluded from a narrative concerning all of Israel's tribes (as Manasseh is in Ezekiel 48's second list). Some passages even include otherwise unknown tribes (Machir and Gilead in Judges 5).

When we get to Revelation 7, the author had several versions of lists of 'the twelve tribes of Israel' to choose from, and yet none of the lists in the Hebrew bible matches his. Was this accidental or deliberate? Interpretations abound.

Precedent for the Revelation's differences

Revelation 7 includes Joseph, but also includes one son of Joseph (Manasseh) and not the other (Ephraim). Numbers 13.11 explicitly conflates Joseph and Manasseh. Psalm 78.67 and Ezekiel 37.16,19 each conflate Joseph and Ephraim. It seems there was a loose tradition of equating the tribe of Joseph with either Manasseh or Ephraim. The Revelation has apparently followed Ezekiel again and conflated Joseph with Ephraim, but counts Manasseh to keep his list at twelve tribes, since Dan has been excluded.

The exclusion of Dan is the most unique feature. That I can find, the only instance in the Hebrew bible where Dan is conspicuously absent from a listing of the tribes of Israel is 1 Chronicles 4-8. These chapters carefully list the descendants of all the tribes: Judah, Simeon, Reuben, Gad, Manasseh, Levi, Issachar, Benjamin, Naphtali, Manasseh, Ephraim, Asher, and Benjamin (a second time). Dan is nowhere to be found.

Interpretations for the differences

Genesis 49.17 identifies Dan with 'the serpent' and 'the viper'. The Revelation's primary antagonist, the satan, is symbolized as 'the serpent' or 'the dragon'. Hence, a common interpretation is that John excludes Dan because of his association with the serpent which symbolizes the chief enemy of God.

Many commentators also note that John places Judah at the top of his list, contrary to nearly all such lists in the Hebrew bible, with the common suggestion that John does this because Jesus is identified as the 'lion of the tribe of Judah' in Revelation 5.5. Some scholars further suggest this arrangement may shed light on why Dan is excluded from the list.

David Chilton (Days of Vengeance, page 92), borrowing from Austin Farrer, believes Revelation 7's list and order is directly related to Revelation 21's vision of the new Jerusalem. Like Ezekiel 48, Revelation 21 portrays its idealized Jerusalem as having twelve gates, each with a name of the twelve tribes of Israel. Chilton's argument is that the first six tribes must be placed out from East to West around the North side of the city, followed by the other six tribes from East to West around the South side of the city. The result is that the tribes are organized according to their mothers: 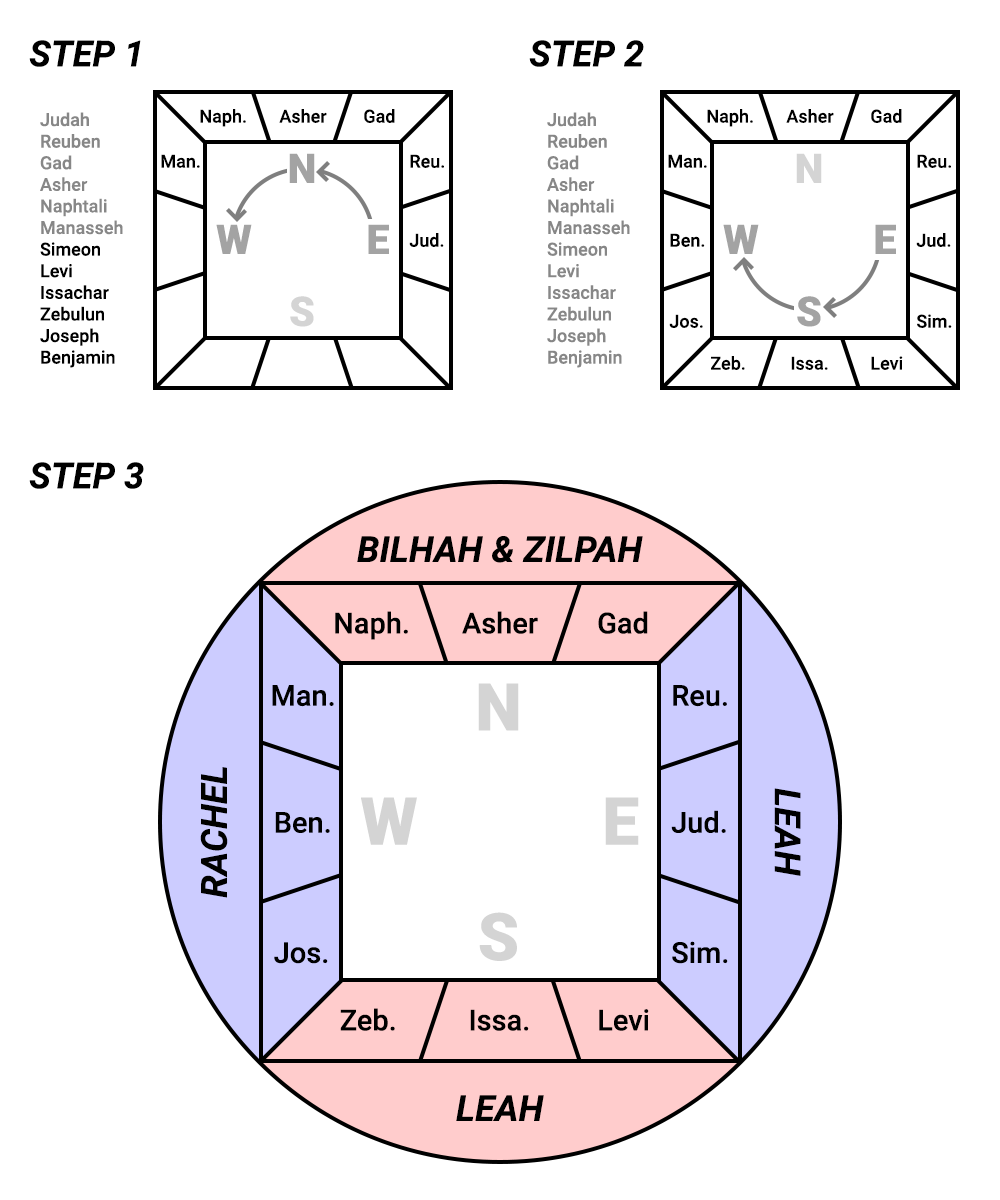 Placing Judah first, including Levi, and excluding Dan are necessary for this (impressive, though admittedly speculative) explanation to work.

The Tribe of Dan has a Very powerful and Specific blessing. its found among the others in Genesis 49..May we ponder that this tribe does it's work before the end battle? their job os to get people Back To YHWH, before the end.they are subtle, serpents( Is that what YHWH really said) and biting the "horses" never the riders...Blesssings

I wouldn't say that the Levites were never considered to be apart of the Twelve tribes (as the writer above stated) but rather just the opposite. Simply because they were not numbered (in Numbers) does not exclude them from the tribe.

They had (in my opinion) one of the most important jobs with the highest honor which was protecting and caring for the ark, the tabernacle, and all that went with it, including setting it up and taking it down as they traveled through the wilderness. They were placed in the middle of their Giant Caravan and protected on each side by 3 tribes, all strategically placed around them on the North, South, West & East, making a total of 12 tribes. God used both of Joseph's sons to substitute for Joseph & the Levites (making it fair to each son to be included & balanced) and to complete his pattern of three tribes in each group (as we see this number used time and time again throughout the bible. For our God is a God of perfection using mathematical numbers for patterns and symbolic meaning. Knowing this how could we even concider that the Levites would be excluded from Jacob's children).

I believe that the original tribes are "All" the sons of Jacob and that Joseph Sons were substituted/used to complete the pattern needed to set up perimeter of safety and protection for the Community (when not traveling) and for the caravan (when traveling). Perhaps other writings in Revelations,etc were simple mistakes, over sites by the authors.

5
Who are the 144,000 sealed in Revelation 7?
14
Why is the tribe of Dan missing from Revelation 7:5-8?
7
What is the historical interpretation of 'Nicolaitans' in Rev 2:15?
6
Interpretation of Dan being a serpent?
16
What significance does the word order of people, tribes, nations, and languages play in Revelation?
1
Why an equal number from each tribe?
4
What is the relationship between Ezekiel’s vision of Jerusalem and the 12 Tribes with the vision in Revelation 7 and the 144,000 from the 12 Tribes?
2
Are the harlot, “Babylon the Great” from Rev. 17:5, and “Babylon” from 1 Peter 5:13 synonymous?
3
Revelation 1:10 What is the significance that the voice is loud and behind John?