Why does Paul say he wasn't sent by men?

Paul, an apostle, (not of men, neither by man, but by Jesus Christ, and God the Father, who raised him from the dead;)

What does Paul mean by he wasn't sent by man, but was sent by Jesus Christ?

The issue I'm having is that Paul seems to be saying Yeshua is not a man.

The expression of men, found in Galatians 1:1 and elsewhere, seems to echo Christ's words1, later recorded in Matthew 15:9 and Mark 7:7-8, as well as Paul's own instructions from Colossians 2:8, 2:22, and Titus 1:14, whose main intent appears ultimately concerned with the issue of establishing a proper pedigree of authority. Just as the Holy Gospels do not deny Moses' humanity, so does Paul not deny Christ's, but rather they affirm the two as being divinely inspired prophets, as opposed to mere human interpreters of divine revelation, as was the case with the scribes and the pharisees.

1 Paul's Epistles predate the (written) Gospels, so they cannot be said to quote them. See oral gospel.

For one thing, I think Paul probably assumes his readership is already well-founded in the fundamental principles of the faith, one of which is the humanity of Christ as expressed here and elsewhere with clarity:

1 Corinthians 15:21-22 "For since by man came death, by man came also the resurrection of the dead. For as in Adam all die, even so in Christ shall all be made alive."

The repeated term, "by man", establishes Christ and Adam as equally human. Paul elsewhere shows the earthly nature of "the man Christ Jesus" to be "the likeness of sinful flesh" and so on throughout his epistles, so it's not unreasonable for him to suspect no question in our minds (his readers being familiar with his doctrine) that Jesus was and is a human being.

The other consideration is context. When Paul claims his apostleship was "not of men, neither by man" he is making no allusions to Christ's humanity, but is speaking to the supernatural origin of his own appointment, and he thereby leads the reader to understand "men" and "man" to mean something like this:

"My apostleship is not the brainchild or product of some human organization or earthly authority (it is not of men), nor was my apostolic ministry determined by the will of man or executed by the machinations of mankind in general (it is not by man)."

There are lots of places where Paul could have elaborated for better clarity, but opted instead for economy of words. 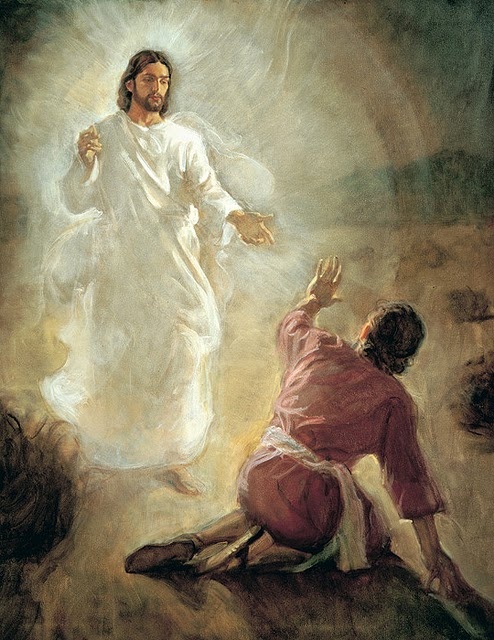 St. Paul is declaring the authority with which He was comissioned (to be an apostle) by the Lord, and not mere man; by Gods authority and not simply a human authority (Acts 22:10).

He thus elevates the magnificence of his apostolic vocation, not in a proud way, but a humble way, and reinforces the fact that he is sent on behalf of God, not of men (he has God-given authority to give the message he does).

In context to Galatians 1:1, Paul is referencing an event documented in [Acts 13:2] when the Holy Spirit inspired Paul to separate his association with the Church at Antioch.

“As they ministered to the Lord, and fasted, the Holy Ghost said, Separate me Barnabas and Saul for the work whereunto I have called them.”

After Paul separates himself from the Apostles at Antioch & criticism of James in Jerusalem [Acts 15], making his own ministry (midrash of Torah & Yeshua's teachings) no longer shaped by the opinions of the witnesses of Yeshua's ministry but instead only by the Holy Spirit.

So they, being sent forth by the Holy Ghost, departed unto Seleucia; and from thence they sailed to Cyprus.

Not the answer you're looking for? Browse other questions tagged paul galatians or ask your own question.

4
Does Galatians 1:1 preclude the Lord Jesus Christ from being just a man?

5
Romans 8:11 - present or future?
5
Does Paul's teaching about women in Galatians 3:27-28 contradict that of 1 Corinthians 14:34-35?
4
Galatians 4:6 -- Why do King James and NKJV say "your hearts" and other translations say "our hearts"
4
Does Galatians 1:1 preclude the Lord Jesus Christ from being just a man?
3
Is it significant that Paul's Introductory phrases for each of his letters different?
0
Since at Galatians 1:1 Father is appositional to θεός but Son is never in the NT, how does this make them θεός differently?
4
How does Paul say God separated him from his mother's womb in Galatians 1:15?