Is there a link between the Jewish expectation of a literal Messianic kingdom and the command to witness to the ends of the earth in Acts 1?

In Acts Chapter one we find:

So when they had come together, they asked him, “Lord, will you at this time restore the kingdom to Israel?” He said to them, “It is not for you to know times or seasons that the Father has fixed by his own authority. But you will receive power when the Holy Spirit has come upon you, and you will be my witnesses in Jerusalem and in all Judea and Samaria, and to the end of the earth.” (Acts 1:6-9, ESV)

Is there a link between the Jewish expectation of a literal Messianic kingdom and the command to witness to the ends of the earth? Is Jesus command partly to correct their existing notions about the literal kingdom, or is it not directly related to their existing beliefs about that?

In the New Covenant, Pentecost therefore marks the first day that God made his "tabernacle" among men on earth by indwelling the bodies of believers. What unfortunately happened in the Old Testament was that the Shekinah Glory had departed Solomon's temple shortly before the Babylonian captivity. (Thus the visible theocracy on earth ended, and the "Times of the Gentiles" had begun, since Gentile world powers from that point forward would command the world.) It was during the Babylonian captivity that the prophets wrote extensively about the New Covenant, which was couched in terms of the visible (political) redemption of Israel. For example, when the people cried "HOSANNA!" to Jesus as he entered Jerusalem on the foal, they were expecting him to deliver (or save) them from Gentile rule, since the son of David would fulfill Psalm 2 (among other passages in the Hebrew Bible) to rescue the nation. (Hosanna = "Save us," and of course the palm branches were a clear reference to "tabernacles", when God came to man in the desert on Mount Sinai.) So let me emphasize again, the prophets during the Babylonian captivity (Ezekiel, Jeremiah, et al.) painted a picture of the New Covenant that had included political as well as spiritual redemption. So there is this expectation in the minds of the faithful remnant that the New Covenant will include the visible re-establishment of the theocratic kingdom on earth. That is why the disciples asked Jesus about the re-establishment of the visible theocratic kingdom on earth.

What happened was that the New Covenant was established WITHOUT re-establishing the visible theocratic kingdom on earth. To help describe what I am saying, please see below. 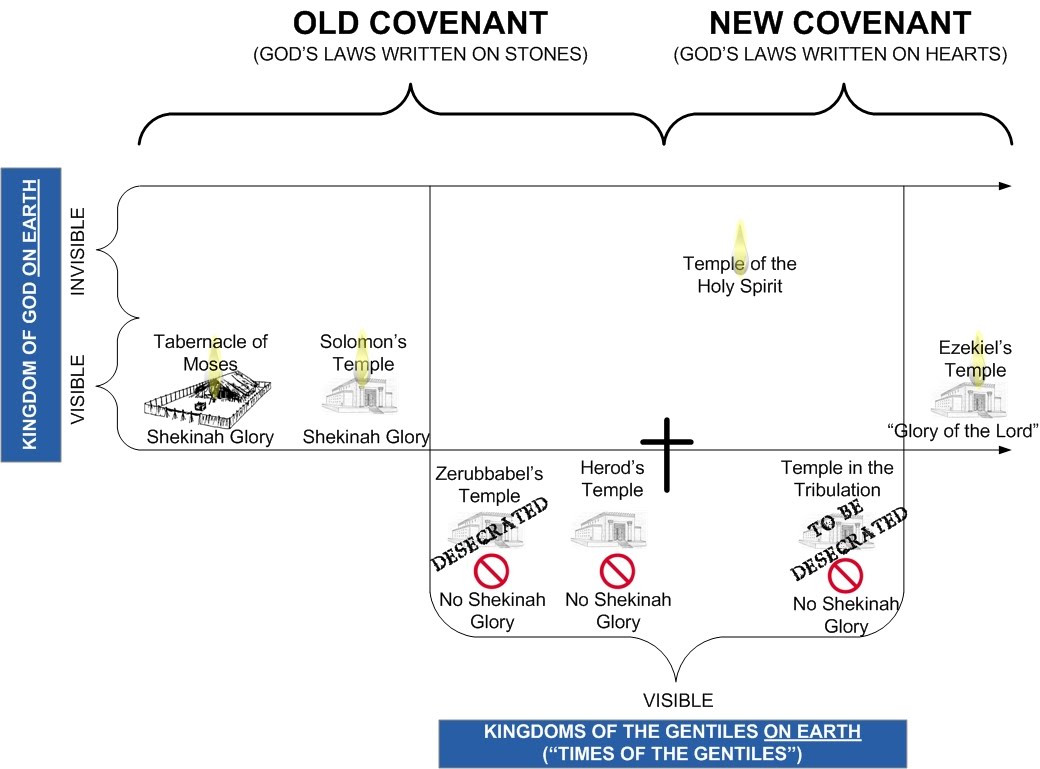 This graph is my own personal rendition of my own understanding of the Kingdom of God on earth as it relates to the Jewish expectation of a literal Messianic kingdom on earth. Again, we are not looking through a microscope, but taking a macro view from 30,000 feet.

Essentially, Jesus was telling his disciples to wait until Pentecost, when the New Covenant would be announced. (The "Times of the Gentiles" would therefore not end!) The Kingdom of God would be literal, but also invisible. In my "opinion", the prophecies in the Hebrew Bible will be fulfilled yet future, and therefore I believe the reference of Jesus to "the times and seasons" in Acts 1 is to what I have tried to depict on my graph -- i.e., the postponement of the visible theocratic kingdom on earth until the invisible kingdom of God on earth ("to the farthest reaches of the earth") is consummated. At that time, "all Israel will be saved" (Romans 11:25). When Jesus will deliver Zion, he will have removed ungodliness from Jacob (Romans 11:26), which is the purpose of the tribulation period (i.e., to remove ungodliness from Jacob). At that time, the New Covenant will be restored to the Nation of Israel (Romans 11:27). From that point forward, the VISIBLE theocratic kingdom will be established on earth, and the temple then will be occupied by the "Glory of the Lord," whom Ezekiel equates with the Shekinah Glory. Of course that Glory is Jesus the Christ.

Not the answer you're looking for? Browse other questions tagged acts or ask your own question.

11
What is the relationship between the "Adversary" in Job and the serpent in Genesis?

15
Why does Paul get annoyed with the slave girl in Acts 16?
2
Is Acts 1:8 a promise or command?
4
The time of restoration of the Kingdom asked in Acts 1:6? Why didn't Jesus answer plainly?
2
Is the anointing of Jesus mentioned in Acts 10:38 an anointing as king, priest or what?
4
Do Matthew 5:17-20 and Acts 15 contradict each other?
2
Is the promise of "power" in Acts 1:8 only for the apostles or for Christians in all ages?
2
What is the intended meaning of the word “power” as used in Acts 1:8?
6
Why does Paul go to the Synagogues when he was supposed to go to the gentiles
2
Did Jesus or G-d come in a vision to Ananias?
4
Why is there a separation between Luke and Acts?