Understanding the purpose of the trumpets in Numbers 10?

And if ye go to war in your land against the enemy that oppresseth you, then ye shall blow an alarm with the trumpets; and ye shall be remembered before the Lord your God, and ye shall be saved from your enemies.

How has this verse been understood by the author(s) and by the audience to which it was written to? How exactly are the Israelite's to be remembered by the Lord through blowing their trumpets when going out to war, and how are they supposed to serve as a reminder? Also do we find anything like this (the use of trumpets in order to arouse the mercy of their gods) in other ANE cultures?

I'm looking for any scholarly sources that may shed light on these verses and ancient Israelite custom/ritual.

P.s. I'm aware that the trumpets had other uses like signaling the elders to assemble or for the people to move from one place to another, however i'm only interested in understanding verse 9 where it states that the trumpets were used during war.

Note that according to the Bible (Numbers 31:6; Joshua chapter 6. However in Joshua only the Shofar is mentioned) the trumpets have indeed been used by the Israelite's in war, so this is not purely theoretical.

Numbers 10:1-10 is not just about blowing any old trumpets, but "the two trumpets of silver" made for the purpose of rallying the assembly of Israel at the door of the Tabernacle:

The use of the silver trumpets for all these purposes is what would cause the LORD to remember Israel. As a priest in Israel, it would surely be risky to expect the LORD to come to nation's rescue if the use of the trumpets was exclusive to times of enemy oppression, but all other commands in regard to their use neglected.

It should be noted that the use of the trumpets is connected to the movement of the camp of Israel and the "mobile" nature of the Tabernacle at the time. As Israel became established in Canaan, their use would have drifted more to the ceremonial aspects mentioned in verse 10.

As a matter of interest, the design of the camp of Israel was defensive in nature, with the Tabernacle within the circle of wagons, as it were. 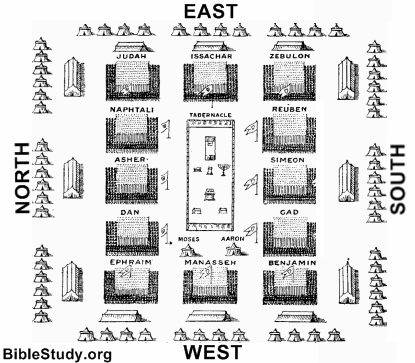 On the journey to Canaan there was an ever-present expectation of attack from hostile people groups, hence the need for rallying the assembly of the people and directing movement of the camp by means of the trumpet calls. Edom in Numbers 20, and Sihon's kingdom in Deuteronomy 2 are examples of being set upon, despite Israel's willingness to purchase supplies and assurances that it was simply passing through the land.

Not the answer you're looking for? Browse other questions tagged hermeneutical-approaches historical-interpretation numbers or ask your own question.

3
In Leviticus 23:24 what is the function of the “festival of the trumpets”?

19
Understanding Numbers 11:25
12
Did all the Israelite women and the male Levites 20+ years old die in the wilderness or not?
11
What is the meaning of the “inverted nuns” (׆ … ׆) around Numbers 10:35-36?
3
In Leviticus 23:24 what is the function of the “festival of the trumpets”?
1
What is the purpose of a Nazarite vow described in Numbers 6?
1
What is the proper understanding of ובן-אדם ויתנחם in Numbers 23:19?
1
In Psalm 81 how does the blowing of the horn relate to the Exodus?
2
Numbers 18 states that Levites have No inheritance among the sons of Israel, but Deuteronomy 18 says Levites could sell their estates