In Deuteronomy 3:27 Why should Moses Moses look East and South?

In Deuteronomy 3:25 (ESV) Moses requests to see the promised land:

Please let me go over and see the good land beyond the Jordan, that good hill country and Lebanon.

In Deuteronomy 3:27 (ESV) God offers Moses what appears to be a consolation prize,

Go up to the top of Pisgah and lift up your eyes westward and northward and southward and eastward, and look at it with your eyes, for you shall not go over this Jordan.

Moses is allowed to see the land, but from afar.

If we consider south west to be equivalent to the "west" in this verse, then Moses could see in the direction of the Negev.

However, no portion of the promised land would be to Moses's east, or truly to his south. So why is Moses commanded to look eastward and southward?

Pisgah and Mount Nebo are located in what had been allotted to the tribe of Reuben:

15 And Moses had given to the tribe of the children of Reuben an inheritance according to their families. 16 Their territory was from Aroer, which is on the bank of the River Arnon, and the city that is in the midst of the ravine, and all the plain by Medeba; 17 Heshbon and all its cities that are in the plain: Dibon, Bamoth Baal, Beth Baal Meon, 18 Jahaza, Kedemoth, Mephaath, 19 Kirjathaim, Sibmah, Zereth Shahar on the mountain of the valley, 20 Beth Peor, the slopes of Pisgah, and Beth Jeshimoth— 21 all the cities of the plain and all the kingdom of Sihon king of the Amorites, who reigned in Heshbon, whom Moses had struck with the princes of Midian: Evi, Rekem, Zur, Hur, and Reba, who were princes of Sihon dwelling in the country. 22 The children of Israel also killed with the sword Balaam the son of Beor, the soothsayer, among those who were killed by them. 23 And the border of the children of Reuben was the bank of the Jordan. This was the inheritance of the children of Reuben according to their families, the cities and their villages.
-Joshua 13:15-23 (NKJV)

Then Moses went up from the plains of Moab to Mount Nebo, to the top of Pisgah, which is across from Jericho. And the Lord showed him all the land of Gilead as far as Dan,
-Deuteronomy 34:1 (NKJV) 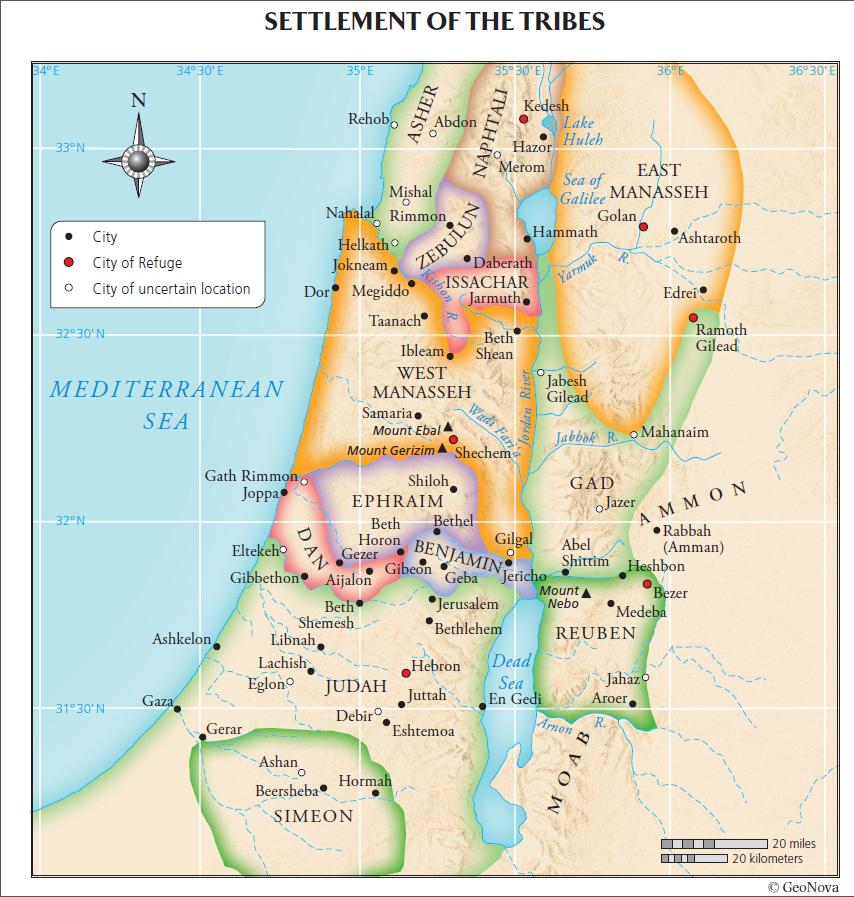 Here is a closeup of the land of Reuben: 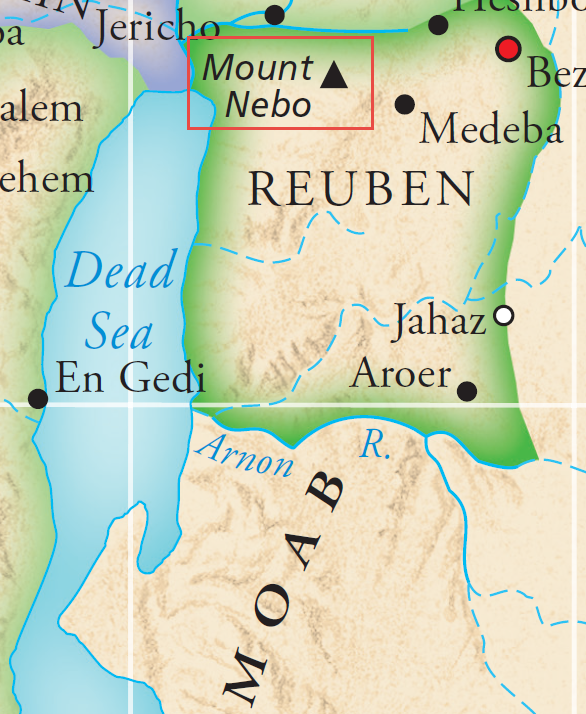 So there was still plenty of land to see in all directions that would belong to Israel. Additionally Moab would be subjected to king David and his kingdom, along with that of Solomon's, would extend all the way from the Euphrates to the river of Egypt (2 Samuel 8 & 1 Kings 4:20-21, 24): 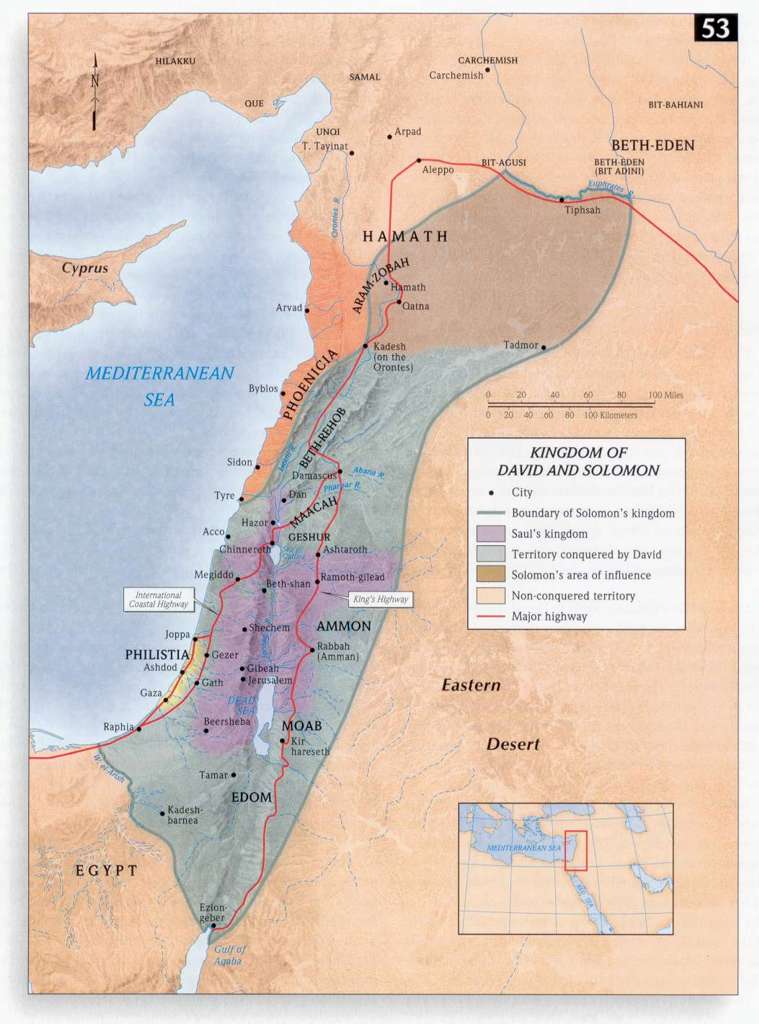 All this fulfilled God's promise to Abram:

On the same day the Lord made a covenant with Abram, saying:

“To your descendants I have given this land, from the river of Egypt to the great river, the River Euphrates—”
-Genesis 15:18 (NKJV) 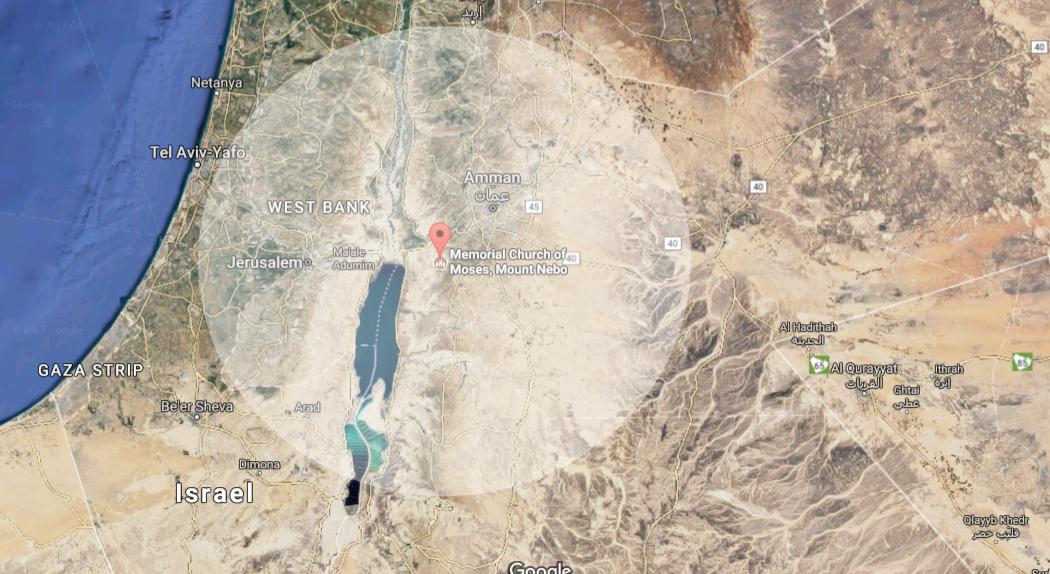 The image above shows a modern terrain view of Israel. The circular area represents the extent of the horizon1 from the top of Mount Nebo, where currently sits the Memorial Church of Moses.2

God sent Moses to the top of Mount Nebo (Deuteronomy 32:49, 34:1) to see for himself the wonder of הָאָ֣רֶץ הַטּוֹבָ֔ה אֲשֶׁ֖ר בְּעֵ֣בֶר הַיַּרְדֵּ֑ן ("the good land beyond the Jordan" - Deuteronomy 3:25) that he had promised to Israel. From that vantage Moses could not only see God's provision, but also the stark contrast of what lay to the east and south.

The Bible doesn't record it, but one could easily imagine Moses' eyes welling up with tears as he beheld such an amazing sight. Not tears of sorrow, though. Tears of joy, because he had fulfilled the charge God had assigned him (Exodus 3:7-10), and thus had participated in the delivery of God's promise to Abraham around 670 years prior3 (Genesis 15:18-21).

Rather than enter with the people, Moses is allowed to see the land:

Go up to the top of Pisgah and lift up your eyes westward and northward and southward and eastward, and look at it with your eyes, for you shall not go over this Jordan.
(Deuteronomy 3:27 ESV)

When Moses looks west he will see Jericho and the first lands which the LORD delivers to the people. When he looks north he will see Hazor, the place at which Joshua stops and the land has rest from war (Joshua 11:23).

Therefore, the sequence in which Moses looks is symbolic of the conquest of the land while being recalling where the journey originated and foreshadowing where it will be continued.

Finally, there is a Messianic aspect to looking to the East last. In looking Moses would be facing east, the direction from which the future Messiah would come.