Does Hosea refer to Gentiles also as quoted by Paul in Romans 9:25?

[24]even us, whom He also called, not from among Jews only, but also from among Gentiles. [25]As He says also in Hosea, "I will call those who were not My people, 'My people,' And her who was not beloved, 'beloved.'" Romans 9 [26]"And it shall be that in the place where it was said to them, 'you are not My people,' There they shall be called sons of the living God."

This is the reference as quoted by Paul in Romans

23"I will sow her for Myself in the land. I will also have compassion on her who had not obtained compassion, And I will say to those who were not My people, 'You are My people!' And they will say, 'You are my God!'"

Paul quotes Hosea as also referring to the Gentiles in his letter to the church at Rome,but it seems Hosea was only addressing the Jewish nation.

Does Hosea refer to the Gentiles at all?

I'm of the opinion that it is the last phrases of 9:25 and 9:26 that include the gentiles:

NASB Romans 9:[24]even us, whom He also called, not from among Jews [Judeans] only, but also from among Gentiles. [25]As He says also in Hosea, "I will call those who were not My people, 'My people,' And her who was not beloved, 'beloved.'" Romans 9 [26]"And it shall be that in the place where it was said to them, 'you are not My people,' There they shall be called sons of the living God."

NIV Hosea 1:1The word of the Lord that came to Hosea son of Beeri during the reigns of Uzziah, Jotham, Ahaz and Hezekiah, kings of Judah, and during the reign of Jeroboam son of Jehoasha king of Israel:

He speaks of the end of the Northern Kingdom (Israel):

NIV Hosea 1: 4Then the Lord said to Hosea, “Call him Jezreel, because I will soon punish the house of Jehu for the massacre at Jezreel, and I will put an end to the kingdom of Israel.

He promises to continue to "show love" to Judah:

NIV Hosea 1: 6Gomer conceived again and gave birth to a daughter. Then the Lord said to Hosea, “Call her Lo-Ruhamah (which means “not loved”), for I will no longer show love to Israel, that I should at all forgive them. 7Yet I will show love to Judah; and I will save them—not by bow, sword or battle, or by horses and horsemen, but I, the Lord their God, will save them.”

Additionally, he says Israel won't be his People but Judah will:

NIV Hosea 1: 8After she had weaned Lo-Ruhamah, Gomer had another son. 9Then the Lord said, “Call him Lo-Ammi (which means “not my people”), for you are not my people, and I am not your God.

There is no gentile "People of God". The Jews are his only People. However, as Paul says, not only do the sons of Israel become the Beloved but gentiles also. They don't become his People but they do become "sons of the living God".

I prepared this Venn Diagram to help clarify: 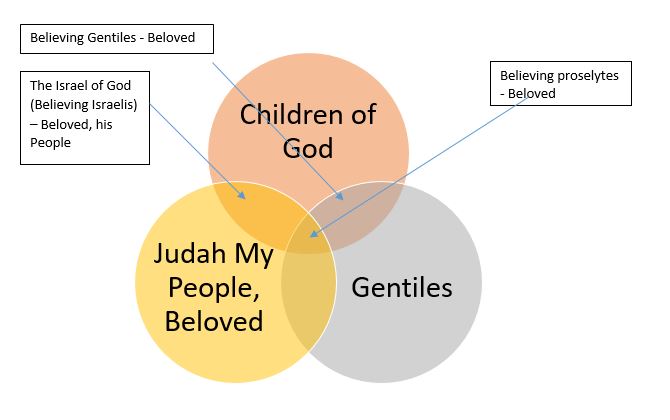 Since writing this I believe I have come to better understand Paul's metaphors and am now persuaded that while initially Jesus came only after the lost sheep of the northern kingdom (Matthew 10:6; Matthew 15:24) who were the 144,000 elect first fruits, afterwards he sent Paul to go to the gentiles and they did in fact join themselves to the People of God. They were "grafted in" to resurrected Israel aka the Israel of God, the Kingdom of God, the Bride of the Messiah, etc. But it was necessary to first resurrect Israel and reunite them with Judah per Ezekiel 37 and to eliminate the ethnic, Torah based obstacles by recapitulating God's People under the headship of the Messiah:

[Eph 1:5, 10-11, 22-23 DBY] (5) having marked us out beforehand for adoption through Jesus Christ to himself, according to the good pleasure of his will, ... (10) for the administration of the fulness of times; to head up all things in the Christ, the things in the heavens and the things upon the earth; in him, (11) in whom we have also obtained an inheritance, being marked out beforehand according to the purpose of him who works all things according to the counsel of his own will, ... (22) and has put all things under his feet, and gave him to be head over all things to the assembly, (23) which is his body, the fulness of him who fills all in all:

Those of the Single-intent school must say that Hosea only spoke of Israel.

Therefore the histories are literal histories, but God put them in scripture because in the telling of the history he embedded a hidden picture of Christ.

"In the place" should not be taken lightly. "Galilee of the Gentiles" a borderland of the Northern Kingdom was precious to Jesus, and in His day was a crossroads of nations/cultures. Jesus wanted to tread physically in Galilee after His Resurrection specifying to His disciples that He would meet them there "at the mountain".

He appeared after His resurrection primarily to those who had been with Him from the beginning, largely from Galilee. Perhaps David's designated heir Solomon worked a prophetic act when he gave to Hiram 20 cities of Galilee. Hiram apparently referred to them as "worthless", which in redemptive sense may have also been a prophetic work of God.

Jesus visited the area of Caesarea Philippi [Paneas] as well as "the region of Tyre and Sidon" - unclean Gentile Galilean territories. Sozomen wrote of a tradition that the woman healed of the bleeding disorder was from Paneas and erected there a statue commemorating Christ [legend, but it is what it is].

Paneas at the foot of Mt Hermon was a 'seat' of pagan spirituality and the region of 'Bashan'/Hermon is frequently seen as a high-conflict zone throughout the OT. The battles over that region are not resolved to this very day. Perhaps Jesus tread upon and laid claim not only to the Samaritan & "lost 10 tribes" regions but to a focal point of the dominion of the lesser gods over all Gentiles. 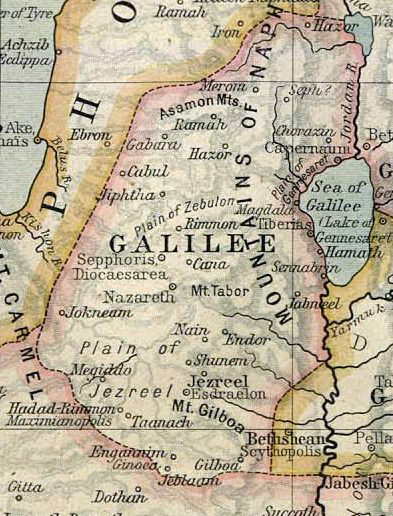 Jesus is the lion from the tribe of Judah. If Judah is His people so then are the Gentiles. For all who are in Christ is a new creature/creation no longer Jew or Greek. Ephesians says He tore down the wall of separation and made the two one, Jew and Gentile one in Christ. So the who were not my people are His people not just sons but also citizens of His Kingdom. Gentiles are a part of his people in Christ.

VaughnVaughn
1
New contributor
Vaughn is a new contributor to this site. Take care in asking for clarification, commenting, and answering. Check out our Code of Conduct.
2
Add a comment  |