Paul's knowledge of Jannes and Jambres the magicians of Egypt

Just as Jannes and Jambres opposed Moses, so these men also oppose the truth, men corrupted in mind and disqualified regarding the faith.

Which is cross referenced to:

Then Pharaoh summoned the wise men and the sorcerers, and they, the magicians of Egypt, also did the same by their secret arts.

But Elymas the magician (for that is the meaning of his name) opposed them, seeking to turn the proconsul away from the faith.

They profess to know God, but they deny him by their works. They are detestable, disobedient, unfit for any good work.

How did Paul know the names of the Magicians since they appear to not be mentioned anywhere else in the bible by name? And how was this cross reference made (how do we really know that he's talking about the same story)?

The only link that I can find is from the Damascus Document which I was led to from reading Moses in Biblical and Extra-Biblical Traditions by Axel Graupner, Michael Wolter.

According to Pliny's natural history, in discussing the origin of magic in the world he mentions Jannes in relation to Moses.

There is another sect, also, of adepts in the magic art, who derive their origin from Moses, Jannes, and Lotapea,Jews by birth, but many thousand years posterior to Zoroaster: and as much more recent, again, is the branch of magic cultivated in Cyprus.In the time, too, of Alexander the Great, this profession received no small accession to its credit from the influence of a second Osthanes, who had the honour of accompanying that prince in his expeditions, and who, evidently, beyond all doubt, travelled over every part of the world. (THE NATURAL HISTORY (ENGLISH) Pliny the Elder John Bostock, Editor, p5425)

There is a footnote from the editor beside the word Jannes that says:

Eusebius, in his Prœ paratio Evangeliea, B. ix., states that Jannes and Jambres, or Mambres, were the names of Egyptian writers, who practised Magic, and opposed Moses before Pharaoh.

There may have also been literature within Jewish tradition that maintained the names of the magicians which has since perished:

According to Jewish tradition, Jannes and Jambres (or Mambres) were the chief of the Egyptian magicians who opposed Moses (Ex. 7:11, 22), but they are also called the sons of Balaam, and there is a story that they repented and accompanied the Israelites out of Egypt. On this last tradition was founded an apocryphal book called the ‘Repentance of Jannes and Jambres,’ not now extant, and perhaps it was from this latter that S. Paul derived his information. For further details see Sehürer, Jewish People in the Time of Christ, vol. iii. pp. 149–151 (E.T.). We need not be surprised at S. Paul referring to this apocryphal book for an unimportant detail, just as a Christian preacher might refer to the Ramayana or the Mahabharat for an illustration without thereby implying that he accepted the rest of the poem as true. (THE PASTORAL EPISTLES, ERNEST FAULKNER BROWN)

So the answer to the question seems to be that there was some knowledge and biblical commentary both in Jewish tradition and Gentile history that is no longer extant. Paul is simply referring to what was commonly understood at the time to be the names of the magicians, or possibly leaders of two schools of magic who assisted the Pharaoh. Judging from the reference from Pliny it was not considered a mere legend and this probably was their actual historical names.

There was a theory that the second century BCE Jewish historian Artapanus, writing in Alexandria, was responsible for the legend; this was rejected already in the 19th C. by Emil Schürer: see this and other sources cited and discussed in his History of the Jewish People (1891), vol. 3, pp. 149-51.1

There is also a reference in the Damascus Document to "Yḥnh and his brother" (את יחנה ואת אחיהו) in 5.18-19: 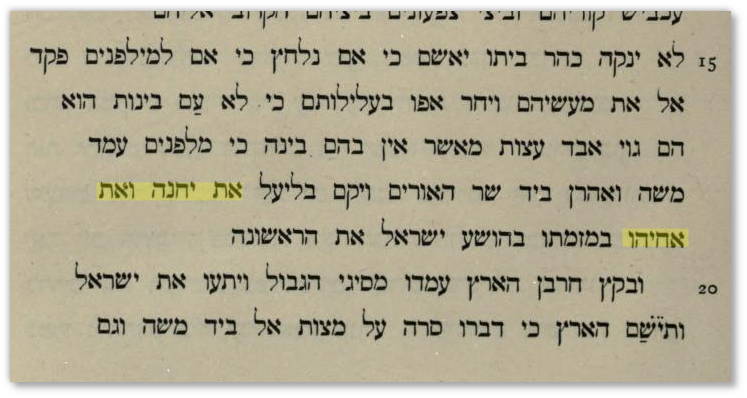 As Albert Pietersma notes (in what I reckon is probably the most authoritative treatment of the problem), this lends credence to Schürer's supposition of a Palestinian origin for the tradition, and that probably before the 1st C. BCE.2

So, this answer simply clarifies or adds (to the helpful replies already supplied as I write this one) the following points:

The same conclusion persists: the "legend of Jannes and Jambres" was already well established by Paul's day, and he could have picked it up in any number of ways, given his level of education and breadth of reading.3

Exactly as others have said: these names appear in Jewish non-biblical tradition, specifically in the Targum of Pseudo-Jonathan to Exodus 7:11, as well as in later Hellenistic sources (like Josephus). Martin McNamara discusses it here, and there is a lengthy discussion of the Jewish and Greek sources here as well (page 1-71). As Frank Luke noted in a comment, Paul was educated by Rabban Gamliel and so he would have been familiar at least with the Targums in some form.

There is a passage in the Book of Acts that talks about Simon the magician (Acts 8:14-24), and which might help to better illustrate the mention of Jannes and Jambres in 2 Tim 3:8.

Simon the magician was an ostensible convert to Christianity. That is, he "believed and was baptized" (Acts 8:13). However, when he observed the laying of hands and the giving of the Holy Spirit, he offered money as if the bestowal of the Holy Spirit were a magic trick. (There is no mention that Simon had desired to receive the Holy Spirit.) The Apostle Peter had accused him of having no portion in the matter (i.e., no portion with God's Spirit). Simon was still "in the gall of bitterness and in the bondage of iniquity" (Acts 8:23). Apparently his outward conversion to Christianity had cost him his ability to perform sorcery and other magic arts, for which he had become very bitter. In so many words, Peter accuses him of never having been converted, since he warned him to repent from a heart that was not right with God.

We know that there is evidence from the Dead Sea Scrolls and other extra-biblical literature (such as the Targums) that Jannes and Jambres (or Mambres) were Egyptians reputed to have been magicians in the court of Pharaoh. The Apostle Paul may have been familiar with these Jewish traditions, since their names are not mentioned in the Hebrew Bible. We know from the Hebrew Bible that the Egyptian magicians had acknowledged that the power of Moses was indeed "the finger of God" (Exodus 8:19), and therefore they conceded defeat and stopped trying to resist Moses with their own magical arts. It seems that Jannes and Jambres (like Simon the magician in Acts chapter 8) were ostensible converts, and therefore had departed Egypt with Moses as part of the "mixed multitude" in Exodus 12:38. However, like Simon the magician, who was an ostensible outward convert, they were "rejected in regard to the faith" (2 Tim 3:9). Jannes and Jambres opposed Moses in the same way that apostate Christians (about whom Paul wrote to Timothy) had opposed the truth, and therefore were rejected in regard to the faith. Jannes and Jambres therefore had not opposed Moses as unbelievers in Pharoah's court, but as apostate believers in the wilderness (like Balaam, to whom these two men are also associated in ancient Jewish folklore).

4
Did Luke base the story of Paul's conversion on the ancient play, the Bacchae, by Euripides
6
Of Titus and Old Men
3
Can history shed any light on the "secret arts" of the Egyptian magicians who turned their staffs into serpents?
3
Significance of Paul's conversation with the Tribune in Acts 22:26-28
2
Why are the Israelites told to stay home until morning if they were meant to leave Egypt at midnight?
2
What does Paul mean by "denying its power" in 2 Timothy 3:5?
3
Does the election of Matthias as an apostle via casting of lots (Acts 1:21-26) contradict 1 Corinthians 12?
2
What is the difference between having the spiritual gift of prophecy and being a prophet?
6
Was Paul really still a Pharisee? Acts 23:6