In Ruth 3:7-8 (NET) after working the Threshing floor for the day, Boaz eats his meal and falls asleep:

When Boaz had finished his meal and was feeling satisfied, he lay down to sleep at the far end of the grain heap. Then Ruth crept up quietly, uncovered his legs, and lay down beside him. 8 In the middle of the night he was startled and turned over. Now he saw a woman lying beside him!

Why did Boaz and his workers sleep at the threshing floor instead of returning to their homes for the night? Was this a common practice of the time? If so, why?

To prevent the grain from being stolen. Lange's Commentary speculates that Boaz was perhaps relieving his overseer that night, since Naomi informs Ruth that “tonight he winnows barley” in verse 2.

Ver. 7. And Boaz ate and drank, and was cheerful. It illustrates the simplicity of ancient patriarchal times and manners, that Boaz, the wealthy proprietor of a great estate, himself keeps watch on his threshing-floor, works till late, and then betakes himself to rest in the solitude of the open field.1 It is clear that he did not do this every day; for the well-informed Naomi says, “to-night he winnows barley.” It is probable that this night he relieved his overseer.

1 [The same practice is still continued in Palestine, cf. Rob. ii. 83; Thomson, ii. 511     Its design is, of course, to keep the grain from being stolen. Thomson says, that “it is not unusual for husband, wife, and all the family to encamp at the threshing floors, and remain until the harvest is over.”]

Here is a picture of a reconstructed threshing floor at Yad Hashmonah, Israel: 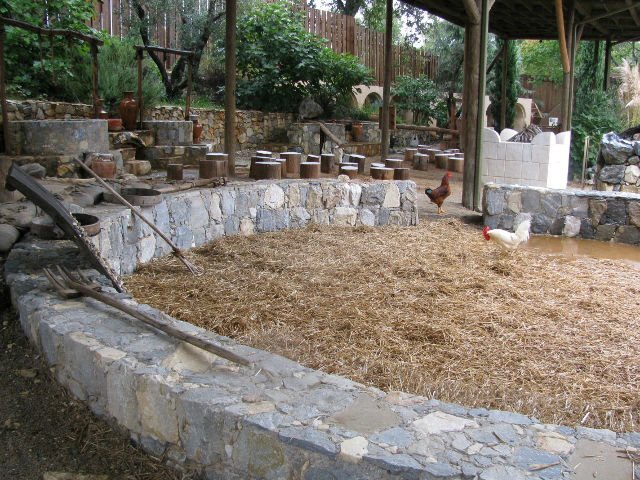 Not the answer you're looking for? Browse other questions tagged cultural-analysis ruth or ask your own question.

19
Did Ruth uncover Boaz' feet, or something else?
6
To whom was Boaz paying when buying Naomi's land?
16
Why didn't Naomi know Ruth? (Ruth 3:16)
7
Why would marrying Ruth have impaired the Redeemer's inheritance?
3
Why does God devastate Israel's vines and fig trees and not other crops in Hosea 2:12?
2
Why did Boaz only own part of the field?
3
What does the Gesture of “uncovering feet” and “laying to Boas feet” mean?
0
Did the marriage of Boaz + Ruth the Moabite reveal faith in God nullifies Deuteronomy 23:4?