In Numbers 15:37-39 the Israelites are commanded make tzitzith (fringes, strings, tassles) on their garments

The Lord said to Moses, 38 “Speak to the Israelites and say to them: ‘Throughout the generations to come you are to make tassels on the corners of your garments, with a blue cord on each tassel.

The Jewish Rabbis (see Mishna Torah Rambam tzitzith 1:6) interpreted the word כנפות as the corners of the garment (that is the four corners). They also taught that the proper way of doing the tzitzit is to attach cords to the garment rather than leaving the uncut leftover threads from the hem of the garment to serve as tztitzit. (See also Numbers 15:38 which strongly suggests that the blue cord was attached to the tallit and was not merely an extension of it). I recently saw in the excurses of the JPS Torah commentary on Numbers that the proper meaning of the word כנפות is hem or edge of the garment. According to the distinguished author Jacob Milgrom, in the Ancient Near East the nobility used to wear garments with ornate embroidered hems, and the Israelite's were commanded to wear similar embroidered garments with braided tassels that extended from the hem of the garment itself (Deut. 22:12), as a sign of their nobility (this is the basic idea). You can see here more about Milgrom's theory.

My question is, in this context which interpretation fits better the Hebrew word כנפות, hem or corner? Also, are the fringes an extension of the garment itself (as suggested by Milgrom), or are they strings that need to be attached to the garment (as the Rabbis taught)?

Although kanaph refers to wings in general, as a technical term it refers to an intersection and from there we derive the semantics of a joint, bend, lobe, fold, gathering, corner, etc. When applied to a simple squarish garment, essentially a blanket or shawl, it refers to the obvious corners (Brown-Driver-Briggs 3671). Tassels along the sides were a rather ordinary feature of any such woven material as a simple way to prevent unraveling of the threads. Vertical and horizontal threads are tied off to each of their own kind on each side. To join them over the corner would actually cause the threads to unravel.

A unique and separate tassel was made and attached to each corner. If anything made such a garment "noble" was the p'til tekhelet (a blue cord) which was wrapped around the upper part of the corner tassel. This made it unique as blue was a rare colour and was strongly associated to royalty and divinity.

It is very likely that corner tassels were already in use at the time of the commandment (minus the blue cord) so that the cloth served as a utility blanket used for gathering things such as sticks. The corner cords would be tied together to secure a bundle. It was also used for bedding.

Yemenite Jews have preserved some of the oldest Jewish customs and dress from ancient time. Rabbi Jacob Sapir who observed first hand how this garment was arranged and used wrote in 1859, “God-fearing men, teachers of the people, will wear another garment, with four corners and bearing tzitzits (tassels), below their upper garment and over their backs, from above – the shamlei (so it is also called in Arabic), black or with black and white stripes, made of thick wool, square, with four corners, with which they cover their head and body all the way down, and on the four corners they hang tzitzits [tassels], according to the law, and they cover themselves with the shamlei throughout the day… at night too they cover themselves with it, or use it to cover the mattress on which they lie. And it will be used for every task; people carry things in it when they go buying and selling in the market, or they use it to carry wood.”

It is upon tying these and seeing the blue cord that the person would remember the blue tablets of the commandments e.g. to not "gather" objects on the sabbath (Numbers 15:32-40).

Similar in use today as a yard tarp with four corners and corner bindings. 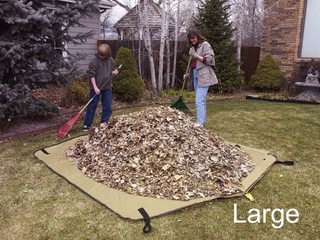 In The JPS Torah commentary: Numbers by Jacob Milgrom (p. 411) there is a full discussion about the nature of the biblical tsitsit. The author presents two possibilities: either kanaph means the "hem or "extremity", or it indeed means the "corners". He supports both interpretations with extra-biblical evidence:

One figure shows that the tsitsit are only the extended threads of the embroidered vertical bands, which, instead of being cut off at the hem, are allowed to hang free. These bands terminate at quarter points of the hem, thereby forming four corners. Another figure illustrates a second possibility. Here the skirts are scalloped and the tassels are suspended where the scallops meet. Our text validates this mode of dress.

The picture below is derived from Egyptian illustrations. It shows a man from the area of Ancient Israel wearing a garment that bears tartan-type designs. Note the tassels hanging from his garment. 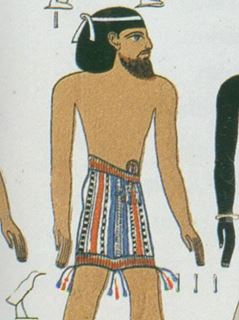 A hem is the edge of a piece of cloth or clothing that has been turned under and sewn. The biblical garment's threads, however, were twisted or braided together and tied off to create a border that would not rip. They were not 'hemmed' in the technical sense, though the function of the twisting/tying/braiding is the same: to keep the garment's individual strands of thread from fraying.

The ancient style of the typical male Hebrew garment (the Biblical Tallit) can be seen in this image:

Though it cannot be seen from this photo, the twisted and tied thread at the bottom of the garment goes all along the four edges (wings). On this garment, some of the corner threads are dyed blue in all 4 corners. Normally the 4 corners were not sewed together at the bottom, but the edges were stitched higher up, so as to preserve the corners themselves below the knees, and to allow for leg motion. As time went on, a smaller Tallit was developed that allowed for the lengthening of the Tsit-Tsit in the corners, which is often worn under other clothing:

This illustrates the 4 corners well, but not the Biblical length. The question is, did the Biblical garment have Tsit-Tsit fringes hanging down like this. My conclusion is no, it was not until the rise of the sect of the Pharisees that this custom of lengthening came into being. Before that, the ancient style of simply twisting and tying the fringes together and dying them would have prevailed. Lengthening the strings in the corners would not have been practical because they would have dragged on the ground often.

"But they do all their deeds to be noticed by men; for they broaden their phylacteries and lengthen the tassels of their garments.

If we assume they were wearing Biblical dress as shown in the first photo, then a lengthening of tassels would have resulted in them dragging on the ground.

Thou shalt make thee fringes upon the four quarters of thy vesture, wherewith thou coverest thyself.

The words translated as 'vesture' כְּסוּתְ (k'sut) and 'to cover' כַסֶּה (kaseh) come from a root that almost always means 'to cover completely.' Therefore, the garment, literally 'covering', was one that covered the person significantly.

Job 24:7 teaches us that the primary use of a 'k'sut' is to cover nakedness, or at least, it accomplishes that.

What I'm getting at is that the ancient Biblical garment of men and women was one that almost always covered their body up (unlike the Egyptian stela shown in another answer to this question). There would not have been much room for Tsit-tsit fringes that hang lower than the general fringe, though I suppose there would be a few inches.

In the Interlinear, the word in the English is "corners" from the Hebrew word transliterated as "kanaph". Strong's Hebrew 3671 which meant "wings". Brown-Driver-Briggs has it's usage under 2.a. as extremity, and on a garment was the skirt, corner, or loose flowing end.

"`Speak unto the sons of Israel, and thou hast said unto them, and they have made for themselves fringes on the skirts of their garments, to their generations, and they have put on the fringe of the skirt a ribbon of blue,

39 and it hath been to you for a fringe, and ye have seen it, and have remembered all the commands of Jehovah, and have done them, and ye search not after your heart, and after your eyes, after which ye are going a-whoring;

40 so that ye remember and have done all My commands, and ye have been holy to your God;"

"So the fringes, being appointed by God to represent and bring to mind the commandments of God, Numbers 15:39, the mention or sight of them conveyed the intelligence intended. All the Jews wore these, and so probably did our Lord; see Matthew 9:20, where the word κρασπε ον is rather to be understood of the fringe than of the hem of his garment." Source: here

"The fringes were not appointed for trimming and adorning their clothes, but to stir up their minds by way of remembrance, 2Pe 3:1. If they were tempted to sin, the fringe would warn them not to break God's commandments. " Source: here

The fringes were attached to the hem or edge of the garment. The context was a method of reminding them to keep God's commandments, a sign to them that they were under God's commandment as a special people appointed to Him, marked for special service to Him. Just as some today will wear a string around their wrist or finger to remind them to do, or not do something.

There is a very interesting and complete discussion of the Tallit and Tzitzit at JewsforJesus.org here

It seems to me that the translation of כַּנְפוֹת as "corners" is clearly superior in the context of Tzitzith.

First, the word כָּנָף means a wing (see, e.g. Genesis 1:21; Isaiah 6:2) which come to points at the end like a corner. It is more difficult to see the connection between the a wing and a hem or an edge.

These two points combined with the universal Jewish tradition that kenaphot are corners (there is no dispute on this point recorded in the Talmud or the ancient Midrashim), leads me to conclude that "corners" is the better translation.

Not the answer you're looking for? Browse other questions tagged hebrew word-study history numbers or ask your own question.

3
Were priests prohibited from tearing their garments
3
What were the four standards around which the tribes of Israel were camped (Numbers 2:1-34)?
7
Why is Caleb said to be from the tribe of Judah in Numbers 13:6?
1
In Jeremiah 9:26 why are the Judaeans among the nations who cut the corners of their beards?
2
Numbers 18 states that Levites have No inheritance among the sons of Israel, but Deuteronomy 18 says Levites could sell their estates
6
Does the narrator of Numbers assert that the Anakim come from the Nephilim?
1
How did the Levites lay their hands on the bulls in Numbers 8:12?