Did Abraham receive a call to leave Ur as alluded to in Acts 7:2-4?

2 And he said, Men, brethren, and fathers, hearken; The God of glory appeared unto our father Abraham, when he was in Mesopotamia, before he dwelt in Charran, 3 And said unto him, Get thee out of thy country, and from thy kindred, and come into the land which I shall show thee. 4 Then came he out of the land of the Chaldaeans, and dwelt in Charran: and from thence, when his father was dead, he removed him into this land, wherein ye now dwell.

4 So Abram departed, as the LORD had spoken unto him; and Lot went with him: and Abram was seventy and five years old when he departed out of Haran.

Could Abraham have received two calls

genesis acts abraham
Share
Improve this question
edited May 28 '17 at 1:33 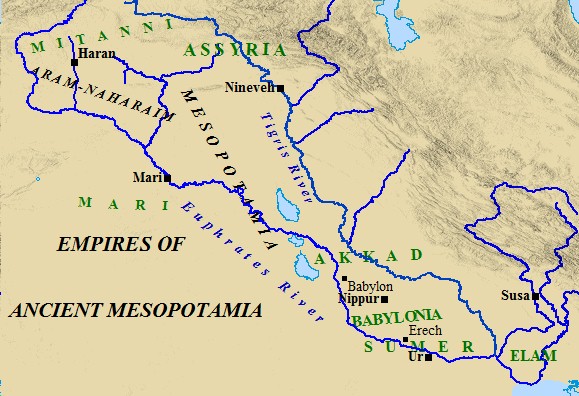 Ancient Mesopotamia was a region centered upon the Tigris and Euphrates Rivers. Ur was in the southern part of Mesopotamia, and was the starting point for Abraham's journey to Canaan. Haran was in the north, where Terah, Abraham's father, had taken him after Terah's father died (Genesis 11:27-32).

When Terah died, Abraham was free to set out from Haran on his way to Canaan.

There is no conflict here, since Haran was a CITY in the REGION known as Mesopotamia.

Abraham received only one call (Genesis 12:1). Terah died in Haran (Genesis 11:32), so Abraham was free to follow that call.

Yes, God twice told Abra(ha)m to "leave your father's household, and go to the land of Canaan." This is knowable to us by putting together five sources:

1: The very few Biblical references to the idolatry that Terah's household had practiced (ex: Joshua 24:2; Genesis 31:53b).

2: In Acts 7, verses 2 thru 4, Stephen states that God had called Abe prior to when the group had settled in the town called Haran.

3: Genesis 12:1 is the Bible's record of the second time that God tells Abe to leave his father's household. Specifically, Stephen's comment, in reply to the high priest (Acts 7:1), is based on Jewish oral tradition, and was recognized by the Jewish High Counsel (called the "Sanhedren").

4: The Jewish oral tradition about Abe.

That first time, about which Stephen speaks, was God's way of at once (a) prophesying of Abe's eventual leaving his father's household, and (b) provoking Abe to evangelize his as-yet-still idolatrous father, Terah and, through Terah's conversion, to convert all of Terah's household.

Abe had had decisive contact from Shem, as is implied by the fact that Shem's autobiographical account (Genesis 11:10-23) ends with Abe. Shem had converted Abe.

It may be supposed at at that time God had then called Abe, and Abe's response to God's call was the dramatic ploy that Jewish oral tradition says that Abe did: Abe was determined to do anything necessary to try to convince his father, Terah, to take Shem's witness to heart. So, according to that oral history, Abe one day waited for Terah to go out of Terah's idol-making shop, and then Abe smashed all the idols except the biggest one that stood prominently in the corner of the shop.

Then, when Terah returned, saw the mess, and asked Abe what had happened. Abe replied something like, "I saw that remaining idol in the corner smash all the others. I guess he was mad that you were allowing yourself to be misled by the other, false idols."

So Terah was finally convinced to believe that Shem's advice was right. This is why, despite that Stephen says that God had called Abe the first time prior to when Abe left Ur to settle in Haran, the ending of Genesis 11 credits Terah for taking his household, including Abe, to go to Canaan.

Terah was just too old, by that time, to actually make any life in Canaan, and might even have died from the long journey that would have been required to get all the way to Canaan. That's why they, including Abe and his wife, settled in Haran: they settled there in order to allow their father to live out the rest of his very old life in peace and ease.

Anyone who then wanted to join Abe to go on to Canaan was up to them. God had never forbidden anyone from going with Abe. But God had foretold that none need go with Abe except Abe's own household (which included his wife, and any 'employees' or 'servants' that Abe might have acquired).

So, when we put all five together,

...we get two critically different instances in which God told Abe to go to Canaan without his father's household. The first time that God told this to Abe, it was God's way of provoking Abe to "get real" about Terah's idolatry.

Terah had still been an idolater, when God called Abe the first time. God was therein posing to Abe the idea of rejecting Terah as unworthy of Abe's full evangelistic effort. This was God's first direct test of Abe, and Abe passed with flying colors. That is what is implied in the Jewish oral tradition about Abe. Abe passed God's first personal test.

This is why Genesis 12:1 says what it says. That verse is not implying that God called Abe out of the blue, nor Abe at random of all persons.

Genesis 12:1 is the only call by God to Abraham noted in scripture. Genesis 11:31 tells us that Ter'ah took Abraham, Lot, and Sarai, and began the journey to Canaan, perhaps out of grief for the loss of his son Haran, but certainly before the call on Abraham.

Terah took his son Abram, his grandson Lot son of Haran, and his daughter-in-law Sarai, the wife of his son Abram, and together they set out from Ur of the Chaldeans to go to Canaan. But when they came to Harran, they settled there.(NIV)

The God of glory appeared unto our father Abraham when he was in Mesopotamia before he dwelt in Charran.(NIV)

The beginning of Genesis 12:1 indicate that the call had already been given and the response was only now being recorded. Furthermore even though the call was to Abraham, God had stirred the heart of Terah to begin the journey to the very place he promised to Abraham so that when Terah died Abraham continued in God's divine will.

Not the answer you're looking for? Browse other questions tagged genesis acts abraham or ask your own question.

12
Did Abraham leave Haran before or after his father died?
4
Did Abraham lose track of a visitor?
7
Did Abraham meet Jacob as alluded in Hebrews 11:9?
5
Fourth from whom in Genesis 15:12-16?
1
In Genesis 49:1-27 is Jacob describing the general future, final days or demise of each of the tribes of his sons/Israel?
4
The incongruity of God's covenant with Abram in Gen 12:1?
2
Is the Angel of the Lord identifying as God? Genesis 21:16-21
1
What was the time gap between the event Abraham justified by Faith in James 2:23 a and later Abraham justified by works in James 2:21?
3
Did God give an oath to Isaac as alluded in Psalms 105:8-10?