Why does the KJV not include the phrase “having his name” in Revelation 14:1?

14:1 And I looked, and, lo, a Lamb stood on the mount Sion, and with him an hundred forty [and] four thousand, having his Father's name written in their foreheads.

14:1 And I saw, and behold, the Lamb standing on the mount Zion, and with him a hundred and forty and four thousand, having his name, and the name of his Father, written on their foreheads.

14:1 And I saw, and behold, the Lamb standing upon mount Zion, and with him a hundred and forty-four thousand, having his name and the name of his Father written upon their foreheads

[1]Then I looked, and behold, the Lamb was standing on Mount Zion, and with Him one hundred and forty-four thousand, having His name and the name of His Father written on their foreheads.

Why does the KJV not include this phrase?

revelation textual-criticism
Share
Improve this question
edited May 4 '17 at 12:12

The translators of the KJV used a Greek text -- the "Received Text (RT)" -- that was based on late medieval manuscripts.

Interestingly, the critical Nestle Aland NT Greek text does not even record variants for this textual situation. This is the manuscript evidence, as recorded by the Center for NT Textual Studies: 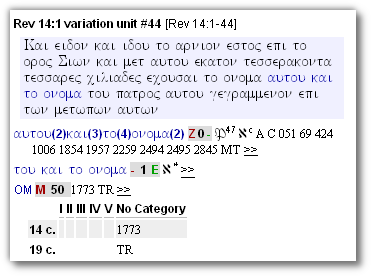 This has been understood as an obvious scribal mistake. In the string:

the scribe's eye has jumped from the first τὸ ὄνομα to the second, thus leaving the shorter text used by the KJV translators, but not in more recent translations based on a wider (and often older) mansuscript base.

Not the answer you're looking for? Browse other questions tagged revelation textual-criticism or ask your own question.

4
Does the woman in Revelation 12 go down to the earth from the heaven?
2
Question concerning those who “wash their robes” in Revelation 7
11
Why the use of Lamb “ἀρνίον” and not either Lamb “ἀρήν” or Lamb “ἀμνὸς” in Revelation?
3
Is the number “144,000” mentioned in Revelation 14 a literal number or a prophetic number?
3
Is the Mark of the Beast Actually Voluntary?
2
Is “under the altar” in Rev 6:9 the same as “before the throne” in Rev 7:9 and 14:3?
2
Why is the sharp sword not “double-edged,” in Revelation 19:15?
1
Why doesn't the Father know the Name which was written?
3
Does Revelation 20:4 refer to 4 different groups of people?
0
Does the worship of the Lamb in Revelation 5 contradict the first commandment (Exodus 20:2-4)?