Closely Related:
- What was Eve's role in relation to Adam?

Question : What does "Before" Imply?

In Genesis 2:18, "Helpmate", (עזר כנגדו | ezer kenegdo, Interlinear) doesn't seem to represent the underlying Hebrew - which is, "helper before him".

NASB, Joshua 5:13-14 - Now it came about when Joshua was by Jericho, that ... a man was standing opposite him with his sword drawn in his hand, and Joshua ... said to him, “Are you for us or for our adversaries?” 14 He said, “No; rather I indeed come now as captain of the host of the Lord.”

Koehler Baumgartner (HALOT) lists נֶגֶד here as originally a substantive, not a preposition. So with the 3rd person pronominal suffix, and the כ inseparable preposition, would be something like "according to his opposite" or "according to what is proper for him." See the usage in Proverbs 8:6 as well. Neh 3:16 and 3:26 have a similar meaning with עד, "as far as is opposite."

Evidence for this usage is from Middle Hebrew, which has a meaning of "opposite, corresponding", as well as from Soqotri (An Old South Arabian dialect) which has the same meaning (with a locative, or "directional ה").

The meaning as a preposition with genitive or suffix (which is the normal one found in Gen 24:7) has a meaning of "in front of."

Now, since HALOT lists only 3 places for this susbtantive usage in the Hebrew Bible, many might find it suspect. HALOT does have a tendency to find new roots and meanings where BDB would not. To get to the bottom, one would need to do a full lexical analysis of all 150 instances in the Hebrew Bible.

Therefore I think one could conclude that the concrete usage is in effect in Gen 2:18 and 2:20 meaning "his opposite" or "as is proper for him."

As for the LXX, here is a page from the Gottingen Septuagint of Genesis prepared by John William Wevers, and is the critical edition. 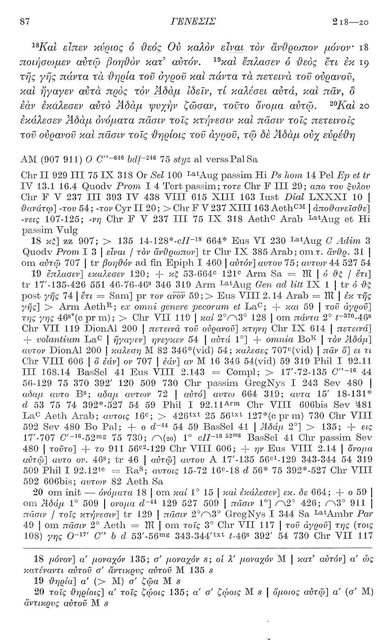 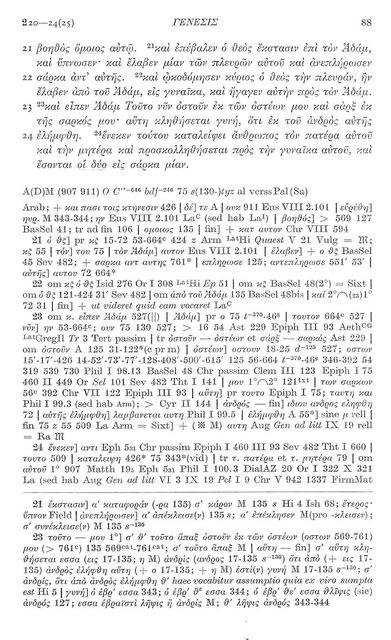 As you can see, the LXX renders this phrase κατ᾽ αὐτόν (according to him). This is similar to how we saw the concrete usage above.

What is very interesting, is that the LXX renders this in Gen 2:20 as ὅμοιος αὐτῷ, or "similar to him." You can also see from the critical apparatus at the bottom for verses 18 and 20, that Aquilla and Symmachus (the hexaplaric witnesses to the Septuagint) both changed this. Symmachus tried to match the Hebrew (which is attested by the M for Masoretic in the apparatus) with ἀντικρὺς αὐτοῦ, which is very close to "his opposite". Aquilla did this in verse 20, but in verse 18 has κατεναντι which is kind of the middle ground, meaning "in front of, before, opposite." So this is the metaphorical usage found above, which is based on the concrete usage in the Hebrew.

Wevers notes that the hexaplaric witnesses like to correct back to the Hebrew when they have a chance.

Not the answer you're looking for? Browse other questions tagged genesis hebrew word-study historical-interpretation creation or ask your own question.

18
What was Eve's role in relation to Adam?

13
How to interpret Genesis 25:1-2?
3
Is the word for 'helper' used to describe Eve in Genesis 2, also used for God helping Israel?
2
Not good for Adam or Mankind to be alone? Genesis 2:18
0
Is this take on the Hebrew of Joshua 10:12-13 credible?
6
Origin of Pleonastic Phrasology in the Bible
2
Should Psalm 47:4 use of word “inheritance” associated with Ancient Israel's land's physical borders or inheritance in Jesus Christ?
1
In James 2:23, does the use of the word “fulfilled” (ἐπληρώθη) suggest that Genesis 15:6 was a prophecy about the future (IE: Genesis 22:12)?