Why do some translations use "every creature" in Colossians 1:15?

Who is the image of the invisible God, the firstborn of every creature (KJV)

He is the image of the invisible God, the firstborn of all creation (ESV)

A large majority of the 56 shown at Biblegateway [Colossians 1:15] have "creation."

Why do some translators see "every creature" as the correct translation? 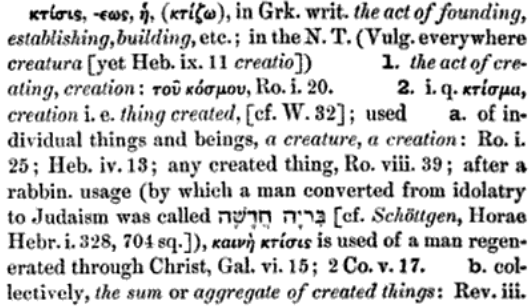 English translations of Col. 1:15 vary between the last two meanings, whether the apostle is referring to “every creature” or “all creation.”

...the anarthrous πᾶσα κτίσις does not mean the whole creation, or everything which is created (Hofmann), and consequently cannot affirm the category or collective whole to which Christ belongs as its first-born individual (it means: every creature...

He further argues that “the article would necessarily be added”3 if it were to be understood as “the entire creation” or “all creation.”

On the other hand, Alford remarked,4

the first-born of all creation (such, and not ‘every creature,’ is the meaning (so I still hold against Ellic[ott]. But see his whole note on this passage, as well worth study): nor can the strict usage of the article be alleged as an objection: cf. below, Colossians 1:23, and Ephesians 2:21 note: the solution being, that κτίσις, as our word ‘creation,’ may be used anarthrous, in its collective sense.

Alford cites two scriptures as proof that the article is not required for the sense “all creation”: Col. 1:23 and Eph. 2:21. The problem with both of these scriptures is that there are textual variants which essentially nullify his argument.5 Alford seems to disfavor the translation “every creature” because it seems to reckon the Son as a creature (as Arians would contend). However, this is not a necessary consequence of such a translation.

Because "pasis" means both "all" and "every" and "ktisis/ ktiseos gen." means both creature and creation.

Both translations are valid.

I am a Greek Speaker

Not the answer you're looking for? Browse other questions tagged greek colossians kjv or ask your own question.