In what sense does Paul use the word sanctify in 1 Corinthians 7:14?

Can a believer sanctify an unbeliever,for sanctification belongs to the Holy Spirit, is Paul here ascribing to men what belongs to God?

Such a good question. It's especially interesting in light of 1 Corinthians 7:12

But to the rest speak I, not the Lord: If any brother hath a wife that believeth not, and she be pleased to dwell with him, let him not put her away.

It's not sanctified from sin. Which only God has the power to do. It is sanctified in holy declaration. The believer sanctifies the unbelieving spouse or declares them holy.

And let the priests also, which come near to the LORD, sanctify themselves, lest the LORD break forth upon them.

For I am the LORD your God: ye shall therefore sanctify yourselves, and ye shall be holy; for I am holy: neither shall ye defile yourselves with any manner of creeping thing that creepeth upon the earth.

The Greek word here is ἁγιάζω, which the KJV translates as "sanctify" or "make holy", but more modern versions (e.g. RSV) sometimes translate as "consecrate". It is in this sense, for example, that the word is used sometimes in the Septuagint, such as:

I believe this latter sense is the way we are to understand 1 Corinthians 7:14. This is also the sense that it seems to have been understood in antiquity. John Chrysostom writes, for example,

"The unbelieving husband is sanctified through his wife, and the unbelieving wife is sanctified through her husband." Yet earlier he said, "Do you not know that he who joins himself to a prostitute becomes one body with her?"2 We might then conclude that a woman joined to an unbelieving idolater becomes one body with him. Is there a contradiction here? No, because although they become one body, the woman is not defiled, since the purity of her faith is stronger than the impurity of his unbelief. Likewise the purity of a believing husband is stronger than the impurity of a believing wife ... There is hope that the spouse who is perishing through his unbelief might be saved through marriage to a believer.3

The historical context is also relevant, I think. At the time that Paul was writing, Christians were a very small minority. Cases abounded where one or other of a married pagan couple would accept Christ before the other. Paul is addressing a practical marital issue here, in guiding spouses how they are to continue to relate to their still unbelieving spouse. The advice given here shows that Paul felt it was better for a couple to remain married, with the believing spouse living in the hope of his or her spouse eventually converting, than for the believer to simply abandon the unbelieving spouse.

In verse 12 of this passage, Paul says [quoted from NASB]

But to the rest I say, not the Lord, that if any brother has a wife who is an unbeliever...

In light of this, I believe there may be a cultural element to verse 14, especially as pertains to the children

...for otherwise your children are unclean, but now they are holy.

No man can by any means redeem his brother or give to God a ransom for him - for the redemption of his soul is costly, and he should cease trying forever.

A father may not approve of his daughter's involvement with an unbeliever but if she marries and has children by the unbeliever then that man becomes the most important man in the world to that father. He will do his best to support the couple, perhaps bringing him into the family business and granting him inheritance.

The same would be true of an unbelieving wife.

This does not guarantee the unbelieving spouse's ultimate justification but while they are parent of a believer's child they are in God's view consecrated to a holy work and in that regard are esteemed as holy, dedicated servants of God. 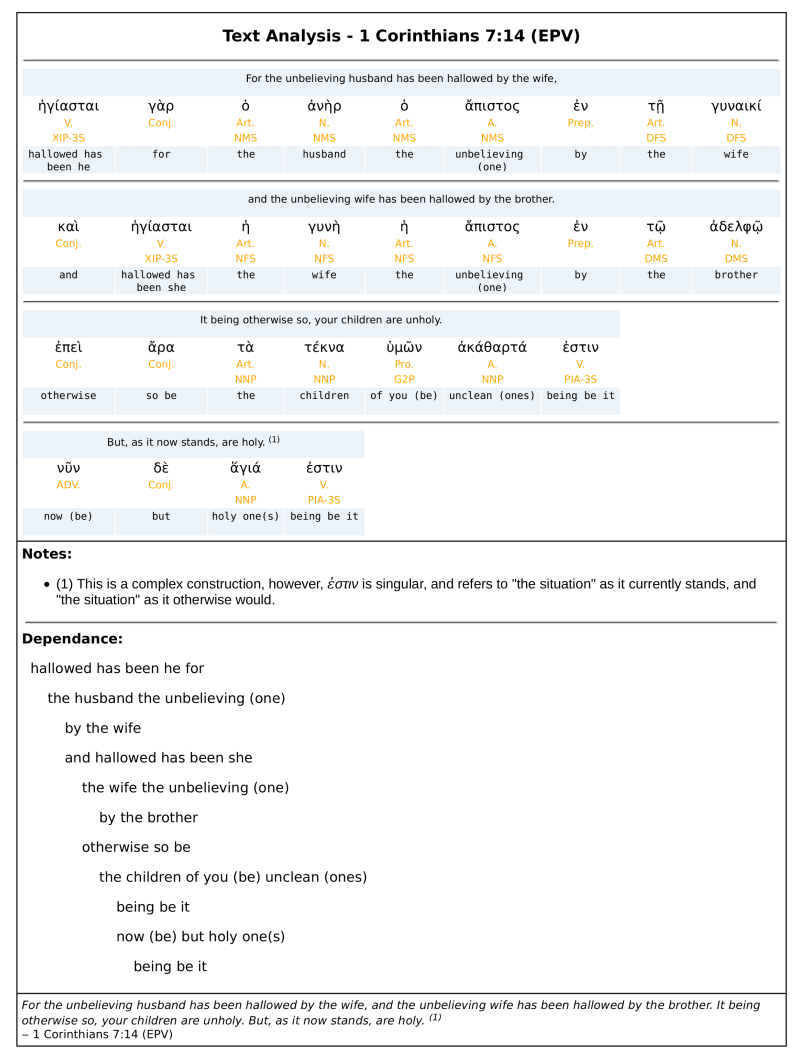 The Greek word ἡγίασται(1), given here as "hallowed", means "to separate from profane things and dedicate to God".

Thinking of it any other way, says Paul, would mean that the offspring of such unions could only be unholy.

This notion is precisely why festivals that used to be pagan, e.g. Easter and Yuletide (Christmas), became legitimate holy festivals, since they were co-opted and set apart from their profane origins, for the purpose of advertising the presence and goodness of God.

Not the answer you're looking for? Browse other questions tagged word-study 1-corinthians or ask your own question.

0
What does 1 Cor 7:14 mean concerning the children being unclean or holy?