To which epistle is Paul referring in 1 Corinthians 5:9?

I wrote unto you in an epistle not to company with fornicators:

But now I have written unto you not to keep company, if any man that is called a brother be a fornicator, or covetous, or an idolater, or a railer, or a drunkard, or an extortioner; with such an one no not to eat.

Many letters were written and passed between the churches from the apostles.

"I charge you by the Lord that this epistle be read unto all the holy brethren."

Not all of these letters were saved or survived.

For example in Colossians 4:16

"And when this epistle is read among you, cause that it be read also in the church of the Laodiceans; and that ye likewise read the epistle from Laodicea."

We don't have the epistle to Laodicea either.

This appears to be the case with the epistle referenced in 1 Corinthians 5:9.

Virtually all commentators agree that there was a previous letter: for example, Thiselton in his NIGTC commentary, and FF Bruce in his book on Paul. Unfortunately, it is now lost.

As N.Ish says, there is evidence for quite a few letters, which are now lost. And of course we don't get the letters that people sent to Paul, although he quotes from them sometimes. For example: 1 Corinthians 7:1:

Now for the matters you wrote about

Modern translations then have the next sentence in quotation marks, indicating that Paul is quoting from the letter that the Corinthians sent to him.

I believe that the Epistle Apostle Paul was referring to where he said "I wrote unto you in an epistle not to company with fornicators" is a God inspired epistle. It is a scripture. Be not deceived.

Also, as touching Colossians 4:16 where Apostle Paul commanded that:

"And when this epistle is read among you, cause that it be read also in the church of the Laodiceans; and that ye likewise read the epistle from Laodicea."

The Epistle from Laodicea is also a God inspired Epistle. It is a scripture. Be not deceived. It is the same as "The Epistle of Paul The Apostle To The Laodiceans." It is a short epistle.

Here is a copy of it. 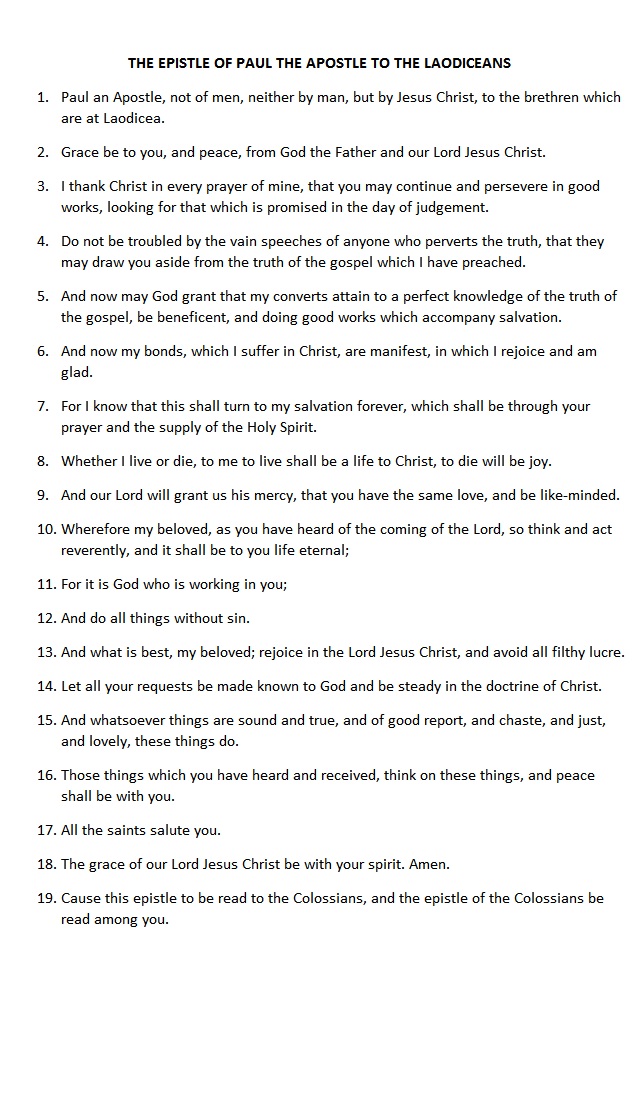 Is an interesting thought on the Greek tense. This reference suggests and interesting answer.

Eluding to lost letters, mentioned the lost letter to the Laodecian church... there is interestingly a letter to them in all of the older German Bibles as well as in Wycliffe's English bible.

Not the answer you're looking for? Browse other questions tagged 1-corinthians or ask your own question.

1
To which epistle was Paul referring in 2 Corinthians 7:8?