What is the purpose of the long and repetitious lists in Daniel 3?

In Daniel 3, the author seems to go out of the way to multiply words. In verse two he names a long list of groups of people:

He then summoned the satraps, prefects, governors, advisers, treasurers, judges, magistrates and all the other provincial officials to come to the dedication of the image he had set up.

And then he immediately follows up in verse three by essentially repeating the list:

So the satraps, prefects, governors, advisers, treasurers, judges, magistrates and all the other provincial officials assembled for the dedication of the image that King Nebuchadnezzar had set up, and they stood before it.

A similar barrage of words comes in verse five with a long list of instruments:

As soon as you hear the sound of the horn, flute, zither, lyre, harp, pipe and all kinds of music, you must fall down and worship the image of gold that King Nebuchadnezzar has set up.

Which is then followed shortly with the same list in verse seven (also in 10 and 15):

Therefore, as soon as they heard the sound of the horn, flute, zither, lyre, harp and all kinds of music, all the nations and peoples of every language fell down and worshiped the image of gold that King Nebuchadnezzar had set up.

I was recently in a group reading this passage aloud and by the second time you read these lists, you really notice them. Why does the author multiply words like this — naming practically every type of official, plus "all the other officials", and the same for instruments (plus "all kinds of music") — and then repeating the full lists several times? Is this a common literary device, and if so what is its function?

Although the prominence of long lists in the court tales of Daniel is often noted by commentators, I am aware of only one study devoted to understanding their use in the book, and their relation to literary conventions in the ancient Near East: Peter W. Coxon, "The 'List' Genre and Narrative Style in the Court Tales of Daniel", Journal for the Study of the Old Testament 11.35 (1986): 95-121.

As will become apparent below, following Coxon's analysis, the "purpose" of these lists varies according their immediate context and rhetorical intent in the book. They associate Daniel with broader "wisdom" traditions in the ancient Near East, and reinforce the narrative structuring of the "tales". Among other things, they also contribute to characterization (when used in "pompous" speeches), and can emphasize "ritual" associations (e.g., with the musical instruments).

Coxon's article is very rich, and needs to be consulted for detail. It seems mostly to have been overlooked by later commentators, which is a shame as it offers an illuminating treatment of this key feature of the book of Daniel. What follows is a brief summary of his article, re-organized for readers of this Q&A.

OP identifies a few lists in Daniel 3 that prompted the question. Here are some more, by category (following Coxon; all references are to the book of Daniel). They vary in length, some repeated verbatim, sometimes small variations (these all discussed by Coxon).
N.b. Versification can differ between Hebrew Bible and English versions; I have tried to ensure references below are correct for English versions.

Coxon also draws attention to "the tendency to produce tripartite lists of words and phrases, often repeated with slight variations" (p. 106), but I'll pass over these here. He also devotes a section to "rhetorical repetition", which is related to but different from the "lists" noted above (and of main interest to OP). By way of illustration, note Coxon's first two examples (p. 108): 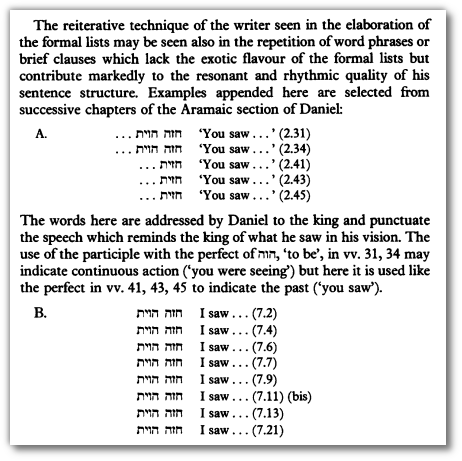 Some of these are very striking, and Coxon adds to them other sorts of repetition: for ironic effect, and repetition/variation across longer sentence units.

So it's quite clear, then, that this feature is a prominent part of Daniel's literary art and craft. Where does it come from?

Coxon notes and describes the use of "lists" in Egyptian and Babylonian literature. These come, for example, in the lists of plants and animals in Egyptian "Wisdom" texts (e.g., the "Instructions of Amenemope", c. 12 C. BC). Or, more extensively, there are the Babylonian lists, well exemplified by the "ḪAR-ra = ḫubullu" text. These have usually been understood as a kind of "ordering science", a bit like the work of an ancient "Linnean Society" devoted to a taxonomy of the natural world. (One well-known, older study investigating these connections is Gerhard von Rad's "Job xxxviii and Ancient Egyptian Widsom", part of his collection The Problem of the Hexateuch and Other Essays, republished in various places.)

Coxon combines his discussion of the various kinds of repetition in Daniel (with pride of place going to the kind of lists noted by OP) with this wider ANE "list science". He demonstrates nicely the embeddedness of the author of the tales of Daniel in these literary traditions, and how the use of lists and repetitions serves the ends of the author, while locating the book (or at least the tales) very much in a "wisdom" context. So he writes on p. 97:

Daniel held an important official post in the Babylonian administration and functioned at court in a manner similar to that of Ahikar the Assyrian wise man and scribe. The court tales themselves extol the virtues of education and the advancement that comes to the diligent young civil servant who actively fulfils the paradigms set out in the old wisdom tradition of the book of Proverbs.

Coxon offers this by way of concluding remarks (p. 117):

In our discussion of the list genre and the sundry ways in which the author has used the technique of systematic interpretation with variation in the formal construction of words, phrases and complete sentences we have attempted to demarcate an intriguing aspect of his style which emphasizes the underlying unity of the individual units and the significant patterns to be found in them. In recent years generic concerns with 'apocalyptic' have dominated the study of the book at the expense of its rich literary qualities. This article has attempted to redress the balance a little by focusing attention on some aspects of narrative style. The close affinity of the list Gattung ["form"] in Daniel with the 'wisdom' traditions of Egypt and Babylonia also supports the view that the court tales had their origin in and were preserved by scribal circles within the framework of Israel's wisdom tradition.

Barnes' Notes does a thorough job of defining the original meanings of all the titles provided in this commentary on this chapter. Scroll at least a third of the way down on the page to find the commentary on Daniel 3:2, in particular. In short, each is a differing aspect and level of governance, with both "civil and military power", including neighboring provinces. The writer seems to be giving a sense of how broad-reaching and in depth this summons was.

Regarding the musical instruments listed, again, the writer seems to be relaying that this was, for the time, an extraordinarily-sized orchestra with an unusual variety of instruments. On that same page that provides Barnes' commentary, under the section for Daniel 3:5, there is detailed description of each of the instruments. It is noteworthy that these instruments were crafted in different regions of the then conquered region. He then goes on to describe that the rendering of the music was potentially a "'tintamarre,' or confusion of instruments, which sounded more like the noise of war than music." Whether played together harmoniously or not, the listing appears to emphasize a variety and intentional inclusion of music from differing regions, perhaps emphasizing the broad reach of the ruler's realm.

Basically, all of the civil and state authorities were called to witness the new law commanding the worship of the image which Nebuchadnezzar had made. The instruments were a form of announcing the call to attend the ceremony or the establishment of the new law, but were also the call to make obeisance to the image. Verse 4 says the herald made the verbal announcement of the command of the king.

If the law was also written, which is not recorded in the texts, the authorities would not only have oral and visual witness, but might have taken back the written affirmation to the people of the provinces. Nebuchadnezzar was covering all law enforcement officials, so no one could be excused for not knowing.

But, for God's purposes, it was handy having all of those in authority in the kingdom witness the power of God when He saved Shadrach, Meshach, and Abednego from the fire. The miracle was probably made known throughout all of Babylon, and by the king's decree the Israelites were not required to worship any other God than their own. (Dan. 3:29) No one else would have been able to make accusation against Israel's God.

Not the answer you're looking for? Browse other questions tagged daniel literary-device or ask your own question.

5
What is the literary purpose of not naming the king in 2 Kings 5-7?
0
When and what is the 'time of distress' in Daniel 12:12
7
Where was Daniel when Shadrach, Meshach and Abednego were thrown into the fire?
7
Why would the royal food and wine have defiled Daniel and his companions?
3
What is Daniel mourning about in Daniel 10:2?
0
Is there a timeline conflict between Daniel 1 and Daniel 2?
3
Does Daniel 10 imply that Daniel consumed meat and wine?
2
Did Daniel receive (worship) what God reserves only for Himself? Daniel 2:46
2
Daniel and King Cyrus