How can we understand Genesis 49:6 in the light of different translations

O my soul, come not thou into their secret; unto their assembly, mine honour, be not thou united: for in their anger they slew a man, and in their selfwill they digged down a wall.

49:6 O my soul, come not thou into their council; Unto their assembly, my glory, be not thou united; For in their anger they slew a man, And in their self-will they hocked an ox

49:6 Into their secret, come not, O my soul! Unto their assembly be not united, O mine honour; For in their anger they slew a man, And in their self-will eradicated a prince.

The translation of Genesis 49:6 has baffled me,can anyone outline to me the original meaning of the text since it has different translations altogether

It seems that these different rendering arise from several different meanings of two similarly spelled words. According to the Hebrew and Aramaic Lexicon of the Old Testament (HALOT), שׁור (dig/cut/prince) means 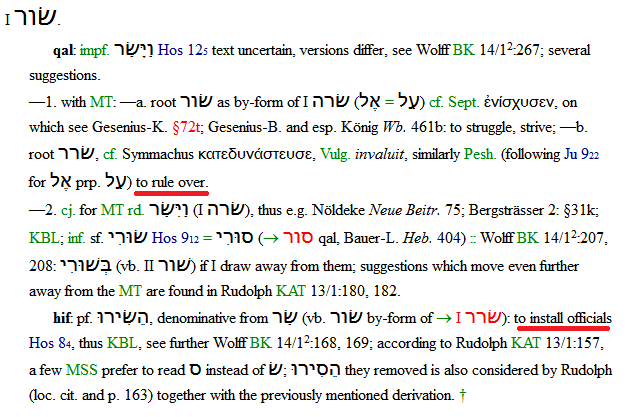 As you can see from the above, this word can mean ruler or prince. However, in the text, it reads שׁוֹר (ox). Notice the dot over the middle letter - this leads to an understandable confusion in translation between the YLT and ASV. It seems that the NIV, NET and NASB all agree with the ASV. It appears that most translators have carefully noted the orthography of שׁוֹר and conclude (appropriately) that it means Ox.

The word translated “ox” (שׁור) could also mean “wall” if pointed שׁוּר, while the word translated “hamstring” twice means “uproot” (Eccl 3:2; Zeph 2:4). The line would then be translated “when they please, they uproot a wall,” perhaps a picturesque way of referring to the sacking of the city. But there is no explicit reference to them doing this in chap. 34. (3) “Ox” refers to the leaders of the Canaanites, Hamor or Shechem, slaughtered by Simeon and Levi. “Hamor” literally means “donkey,” so why not refer to his son Shechem as “ox.” Describing leaders as “bulls” is well attested in Ugaritic (Vawter, CBQ 17 [1955] 4). (4) Another possibility, suggested by Good (JBL 82 [1963] 427–32) and Carmichael (JBL 88 [1969] 435–44), is that the “ox” refers to Jacob, whose interests in peace and security were put at risk by his sons’ deeds. Indeed, he says, “You have brought ruin [עכר] on me” (34:30), and it could be that Jacob here is punning on his earlier comment when he speaks of hamstringing (עקר) oxen.

It seems then, that this is how the KJV arrived at their translation. As Wenham notes, however, עִקְּרוּ (hocked/hamstrung/dug/uprooted) according to the HALOT means, 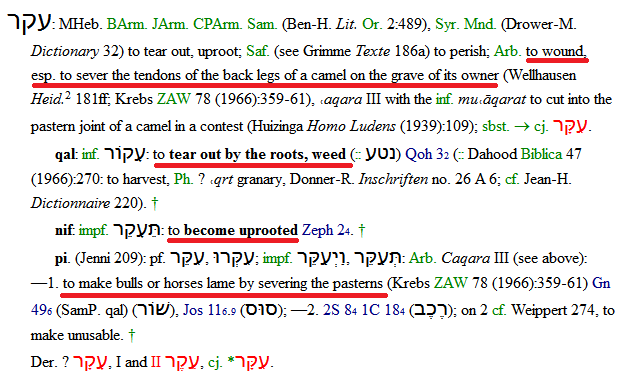 So as you can see from this, it can mean either uproot or to sever the hamstring in the hocks or back legs of a large 4-legged animal. It seems that having decided that שׁוֹר means "wall", the translators of the KJV decided to render עִקְּרוּ in the sense of digging up the roots of a plant as opposed "uprooting" the wall resulting in the rather awkwardly rendered and poor translation of "digged down a wall".

Once it is realized that שׁוֹר should be translated as "Ox" however, it is obvious that עִקְּרוּ should be translated as hocked/hamstrung (as it is translated in Joshua 11:6, 2 Samuel 8:4 and 1 Chronicles 18:4 when referring to horses.) It seems that this is synonymous with "uproot" to give the imagery of tearing out the hamstring tendon which can be though of as a kind of "root" of the leg muscle.

Note that the KJV (1611) does include the alternate reading of "houghed oxen" in the margin:

Hough of course meaning "to hamstring."

Interestingly, the Taverner's Bible (1551) also follows the Vulgate but chooses to be slightly more imaginative in it's rendering "...threw down the walls of the city." 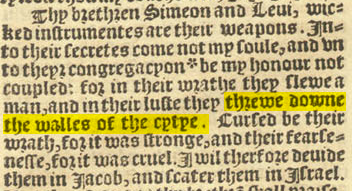 So it appears that there was an ongoing battle between the primacy of the Latin Vulgate versus the Masorete Hebrew during this time.

The Hebrew Scriptures were not originally pointed, with the Masoretes adding the vowel pointings around the 10th century. Thus in the time when Jerome finished the Vulgate (~AD 400) the verse would have appeared like this:

The battle between these two renderings goes even further back to before Jerome. Origin's Hexapla shows that Aquila and Symmachus also went with the "digged down / tore up / threw down a wall" concept (Α. = Aquila; Σ. = Symmachus):

But note in the above picture that the Septuagint (Ο = Septuagint) has ἐνευροκόπησαν ταῦρον [hamstrung a bull] as it's translation (side note: for those who are curious, "Nervos succiderunt bobus" is Latin for "hamstrung oxen").

'Digging down a wall' might have had some contextual influence from Genesis 34, where Hamor's city is said to be gated:

20 And Hamor and Shechem his son came to the gate of their city, and spoke with the men of their city, saying: 21 “These men are at peace with us. Therefore let them dwell in the land and trade in it. For indeed the land is large enough for them. Let us take their daughters to us as wives, and let us give them our daughters. 22 Only on this condition will the men consent to dwell with us, to be one people: if every male among us is circumcised as they are circumcised. 23 Will not their livestock, their property, and every animal of theirs be ours? Only let us consent to them, and they will dwell with us.” 24 And all who went out of the gate of his city heeded Hamor and Shechem his son; every male was circumcised, all who went out of the gate of his city.
-Genesis 34:20-24 (NKJV)

A city with a gate would also have walls, however primitive the walls might have been. So it is possible that Simeon and Levi dug down part of the wall to get into the city to start their murderous rampage. However this is never actually stated, with verse 25 only saying that they came boldly upon the city:

Now it came to pass on the third day, when they were in pain, that two of the sons of Jacob, Simeon and Levi, Dinah’s brothers, each took his sword and came boldly upon the city and killed all the males.
-Genesis 34:25 (NKJV)

The KJV seems to have followed Jerome's Vulgate in it's main text, while putting the Masorete Hebrew meaning in a marginal note. Aquila and Symmachus also rendered this phrase similarly to the Vulgate. However the Septuagint has the rendering of "hamstrung an ox", which matches the Masorete Hebrew, and which is thought to have been written sometime between 300-200 BC.

Both renderings have had major players behind them through the centuries, but I tend to go with the Masoretes on this one, since 'hamstringing an ox' seems to better match with Jacob's previous phrase of 'slaying a man.' Hamor is called the prince of the country in Genesis 34:2, with rulers and leaders often being figuratively called oxen or bulls:

12 Many bulls have surrounded Me;
Strong bulls of Bashan have encircled Me.
13 They gape at Me with their mouths,
Like a raging and roaring lion.
-Psalm 22:12-13 (NKJV)

Rebuke the beasts of the reeds,
The herd of bulls with the calves of the peoples,
Till everyone submits himself with pieces of silver.
Scatter the peoples who delight in war.
-Psalm 68:30 (NKJV)

I greatly respect the TS2009 (aka ISR) translation. For this verse it gives

"Let my being not enter their council, let my esteem not be united to their assembly; because they killed a man in their displeasure, and they lamed an ox in pleasure."

However, I would translate it as,

"May my very being never again come into their conclave! May my honor never join their company! For, in wrath they have murdered men and by their selfishness they have pillaged cattle."

So, there's a few things to note here. First, many people don't realize this, but in the ancient Middle East bovines were a symbol of male virility. During a previous era bull iconography was pared with serpent imagery, which represented female fertility. The Hebrews were one of several neighboring societies which became less egalitarian and more patriarchal. This is one reason the serpent is shown to tempt Hawwah in Gen 3. In fact, you'll notice that she isn't even named until after this event (Gen 3:20) and even then it seems a bit out of place from a narrative point of view. In the context of her newfound life-giving ability having come from the serpent, this verse suddenly makes sense.

All of that to say, bovines and male virility were very important to these cultures and highly symbolic of each other. So, it's significant that Gen 49:6 makes mention of uprooting cattle. Others translate uproot to mean cripple, but another meaning of uproot is "to remove from present location."

You may recall that in chapter 34 Shim'on and Lewi were wroth that Hamor's son Shekem had taken their sister Leah's virginity. So, they convinced Hamor to have all the men in his village circumcised. While the men were still weak from cutting their own manhood the brothers murdered them all. Thereafter they plundered the village. Verse 28 mentions them taking the cattle.

See, they tricked the men into emasculating themselves in order to easily dispatch them. Even after they were dead the brothers further emasculated them by stealing their cattle. So, when Ya'aqob says, "For, in wrath they have murdered men and by their selfishness they have pillaged cattle," he is referencing this event. It's no surprise that Ya'aqob still holds a grudge against his sons. This was the very event that forced him to leave the land of Yitshaq and Abraham. It's also not insignificant that he specifically mentioned them having "uprooted cattle."

Not the answer you're looking for? Browse other questions tagged genesis translation-methodology or ask your own question.

10
How can we understand “fear”?
10
How are statistical comparisons between bible translations calculated?
1
Why do some translations translate eternal life (ζωὴν αἰώνιον) in different ways?
11
Are the three distinctive Hebrew terms, translated “breath of life,” suggesting there was a different mankind at creation than there was at the flood?
0
How can we reconcile the supposed contradiction in Genesis 49:5-7 & Malachi 2:4-6?
3
Is Genesis 6:9 referring to Noah's genetic purity?
1
In Genesis 49:1-27 is Jacob describing the general future, final days or demise of each of the tribes of his sons/Israel?
3
Who is the “possessor of heaven and earth” in Genesis 14:19. Abraham or God?