Matthew 17:20 little faith versus small faith, what do words mean in this context?

He replied, "Because you have so little faith. Truly I tell you, if you have faith as small as a mustard seed, you can say to this mountain, 'Move from here to there,' and it will move. Nothing will be impossible for you." (NASB, See other translations)

I struggle with faith being seen as some mystical force that can be increased to avoid unbelief, yet it can simultaneously be powerful while small. Can faith be translated as 'trust' at times?

In Greek, "faith" and "belief" are exactly the same thing, represented by the word πίστις (pistis) as a noun, or πιστεύω (pisteuō) as a verb.

In the majority of texts, the underlying Greek for what your translation gives as "little faith" is ἀπιστία (apistia), where the prefix "ἀ-" means the same thing that as "un-" in English in this context. In view of this, Matthew 17:19-20 could just as well have been translated:

Why could we not cast him out?

... Because of your unbelief: for verily I say unto you, if you have belief like a grain of a mustard seed ...

Thus, Jesus is not really saying that there is a way to mystically increase belief. He is simply saying that if one believes at all, he can do great things.

19 Later, when the disciples came to Jesus by himself, they said, "Why were we, ourselves, not able to drive it out?"
20 He said to them, "Because of your unbelief. Yet, truly, I say to you, if you should exercise faith, even as a mustard seed, you will say to this mountain, 'Go from here to there!', and it will be gone. Then, nothing will be impossible for you." 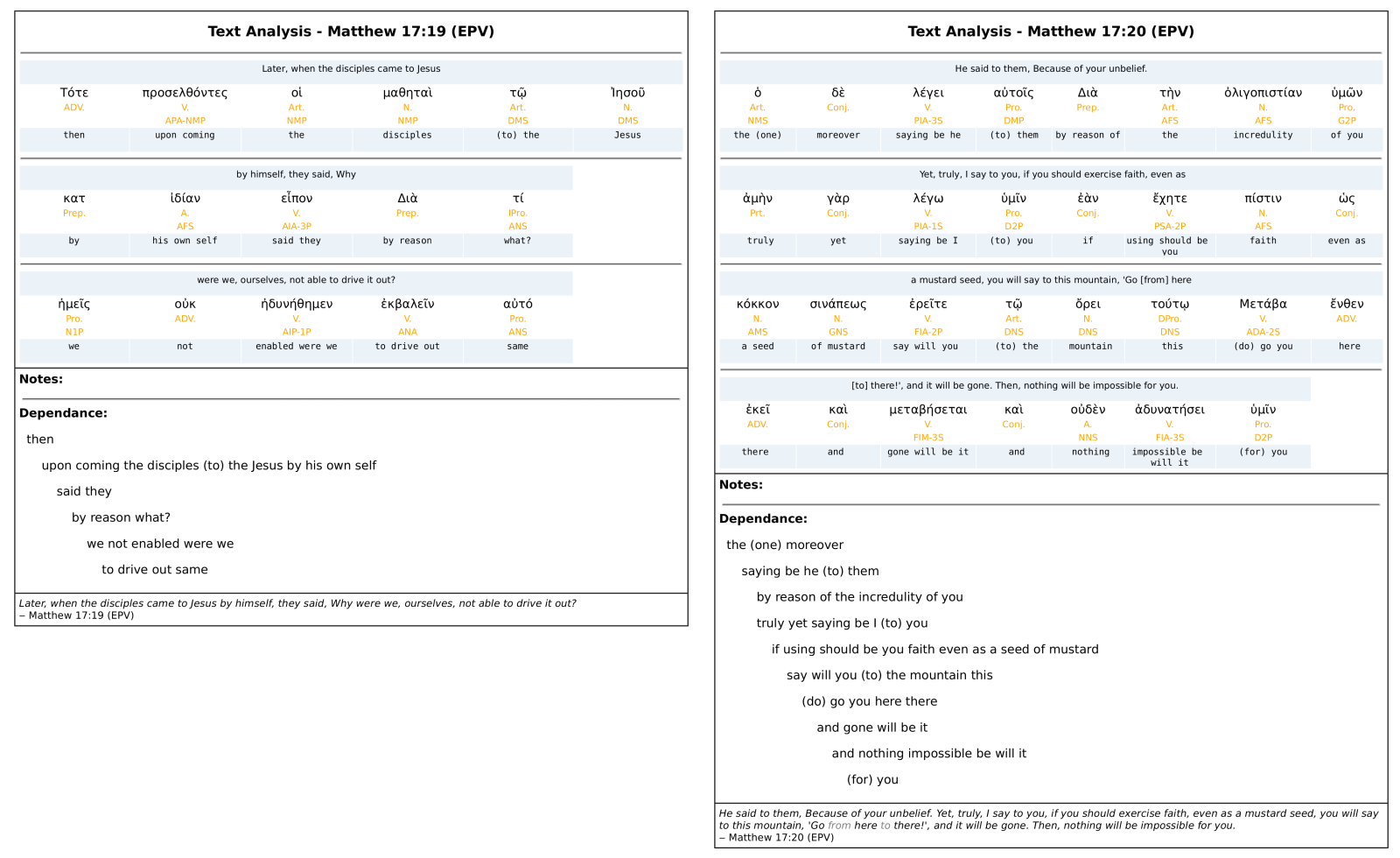 The word ὀλιγοπιστίαν (lemma ἀπιστία - Strong's G570 - apistia) is a noun, meaning faithless or a lack/weakness of faith. It is derived, however, from ἄπιστος (Strong's G571 - apistos), an adjective meaning incredible, unbelieving/incredulous.

So, ὀλιγοπιστίαν is not being used here to express "smallness" of faith, but the attitude of incredulity that would cause one to stop wanting to try, because the task is believed to be impossible. This is clearly the meaning Jesus intends, because he concludes, for those who have the faith of a mustard seed, "Then nothing will be impossible for you".

Indeed, this kind does not come out except by prayer and fasting.

But to do so, cuts Jesus' teaching short of how he most likely would have finished, by giving his disciples something to do when they feel like giving up -- to come to the Father/him in prayer. The writer of Mark's Gospel records that these words were indeed part of Jesus' teaching.

This mustard seed reference occurs in both Matthew 17:20 and Luke 17:6. Scholars say that the authors of Matthew and Luke took the saying from the hypothetical 'Q' document, but each applied it in slightly different contexts. Monaghan Christopher (A source critical Edition of the Gospel of Matthew and Luke in Greek and English, page 104) says:

After the opening image of the mustard seed Matthew and Luke preserve the saying in distinctively different ways i.e. Matthew has the image of the mountain being moved whereas Luke has the sycamine tree.

Q had recorded the saying of Jesus about faith and the mustard seed, but each evangelist had to place it in a suitable context in his Gospel. Luke's reference to moving a tree is more likely to be original, but this was not awe-inspiring enough for the author of Matthew, thus the saying was changed to refer to moving a mountain.

Matthew's Gospel had a ready-made reference to the disciples lacking faith, so Jesus' saying was inserted at this point. However, to the modern mind, this created an unintended contrast between the disciples having too little faith to cast out the demon (or cure the epilepsy), and the smallest faith being able to move mountains.

Luke was better able to use the saying as a response to a request from the disciples:

Luke 17:5: And the apostles said unto the Lord, Increase our faith.
Luke 17:6: And the Lord said, If ye had faith as a grain of mustard seed, ye might say unto this sycamine tree, Be thou plucked up by the root, and be thou planted in the sea; and it should obey you.

Not the answer you're looking for? Browse other questions tagged matthew faith or ask your own question.