8 Peter saith unto him, Thou shalt never wash my feet. Jesus answered him, If I wash thee not, thou hast no part with me KJV, 1769

Was Jesus referring to the apostolic office or salvation when he told Peter “thou hast no part with me”? How can we understand the above text?

The Greek phrase is ουκ εχεις μερος μετ εμου. It can mean portion of something, as in English, but it is used here and elsewhere in the Gospels in the sense of membership:

The lord of that servant shall come in a day when he looketh not for him, and in an hour that he is not aware of, And shall cut him asunder, and appoint him his portion with the hypocrites: there shall be weeping and gnashing of teeth.

The lord of that servant will come in a day when he looketh not for him, and at an hour when he is not aware, and will cut him in sunder, and will appoint him his portion with the unbelievers.

I believe one could interpret it here as meaning that Peter would have no part as a member of Jesus disciples (the Apostles) as well as meaning at the same time that he would have no fellowship with Jesus personally (which most theologies would equate to loss of salvation). Christ is not upbraiding Peter for failing in something that only an Apostle should do (i.e. showing obedience), so I do not think that He is referring only to something like expelling Peter from the band of the Apostles.

To understand this passage, one must understand "in Context" Jesus's remarks, and not pull a particular phrase out which on it's own appears ambiguous.

Jesus was meeting with His disciples. These were the ones who left all and followed Him from the beginning of His ministry. In John 13, they were assembled together to eat the Passover, and also to receive their final instructions before His Crucifixion. Peter was blessed,

"and Jesus answered and said unto him, Blessed art thou, Simon Barjona: for flesh and blood hath not revealed it unto thee, but my Father which is in heaven."(Matt. 16:17 KJV)

he was also given pre-eminence,

And I say also unto thee, That thou art Peter, and upon this rock I will build my church; and the gates of hell shall not prevail against it.(vs 18)

so the idea that he had somehow fallen, or being in danger of falling from grace because of a false perception of what Jesus was saying is ludicrous.

The Lord prefaces His remarks by saying,

"Jesus answered and said unto him, What I do thou knowest not now; but thou shalt know hereafter."(vs 7)

Peter's response betrayed his misunderstanding in verse 8; when the Lord counters with

"If I wash thee not, thou hast no part with me."(vs 8), Peter immediately goes to the opposite extreme and says,

Then the Lord has to correct him again,

"Jesus saith to him, He that is washed needeth not save to wash his feet, but is clean every whit: and ye are clean, but not all."(vs 10)

Jesus then explains the meaning to His disciples,

If I then, your Lord and Master, have washed your feet; ye also ought to wash one another's feet.(vs 14)

He is modeling servant leadership, a lesson that Peter understood later on in his ministry;

Neither as being lords over God's heritage, but being ensamples to the flock.(1 Pet. 5:3 KJV)

Jesus was demonstrating a style of leadership that at first offended Peter; He was doing a servant's task, which was foot-washing. The action didn't take away from Jesus's authority, He said,

But in washing His disciple's feet, He was telling them 'This is how I want you to demonstrate your authority', not in striving for position and recognition, but in serving those under your care.

Jesus is gently admonishing Peter for failing to understand the object lesson He is demonstrating. Peter's salvation was never in jeopardy, rather, he is being used a 'teaching opportunity' to reveal an important lesson on servant leadership.

All Israel have a portion in the world to come.
כל ישראל יש להם חלק לעולם הבא

The Hebrew word חֵלֶק (ḥēleq) also occurs frequently in the Hebrew Tanakh, often translated by a declension of the Greek noun μερὶς. While it is actually the noun μέρος that occurs in John 13:8, LSJ notes the following on its entry for the noun μερὶς:

Hence, when the Lord Jesus Christ told the apostle Peter, «Ἐὰν μὴ νίψω σε οὐκ ἔχεις μέρος μετ᾽ ἐμοῦ»—“Ιf I do not wash you, you do not have a portion with me,” he was referring to the portion they would share together in the world to come, for all those who have been washed and believe in Christ are “in him,” i.e, in communion with him, and likewise, they are “joint heirs with Christ.”2

To answer the original question, the Lord Jesus Christ was primarily referring to salvation, for if he did not wash Peter, then Peter would not share a portion in the world to come with the Lord Jesus Christ. The office of the bishop (ἡ ἐπισκοπή) exists regardless of the virtue of the one holding the office.3

Most theological commentaries are somewhat ambiguous as to what Jesus meant by his words, which seem surprisingly harsh to come from Jesus, but Matthew Poole's Commentary plainly expresses the view that Jesus was saying:

that except he washed him, he had no part with him; that is, he should never be saved (My emphasis).

This raises the question as to why Jesus would be so unforgiving of a minor fault on Peter's part, where at least Peter's intentions appear to have been good. I believe the answer lies in the research done by the respected scholar, Elaine Pagels. Pagels says in Beyond Belief, page 70, that that she discerns throughout John’s Gospel a distinct bias against Peter. There is no direct criticism of Peter but, for example, Peter frequently comes out poorly in comparison to the 'disciple whom Jesus loved', to the point that the Gospel ends with Peter querulously asking Jesus why the disciple was favoured over him, and Jesus replies by asking Peter what business that is of his:

John 21:21-22: Peter seeing him saith to Jesus, Lord, and what shall this man do? Jesus saith unto him, If I will that he tarry till I come, what is that to thee? follow thou me.

I agree with Pagels that there appears to be an authorial bias against Peter in this Gospel, so that the warning to Peter (John 13:8) is probably an authorial insertion that was intended as a veiled criticism of Peter. The author of John's Gospel may have become concerned that, by the time of writing, Peter had become the subject of excessive veneration. If the author sought to correct this, we can say he was successful, as it is now recognised that Peter, although the leader of the apostles, was human and had his faults like any other. 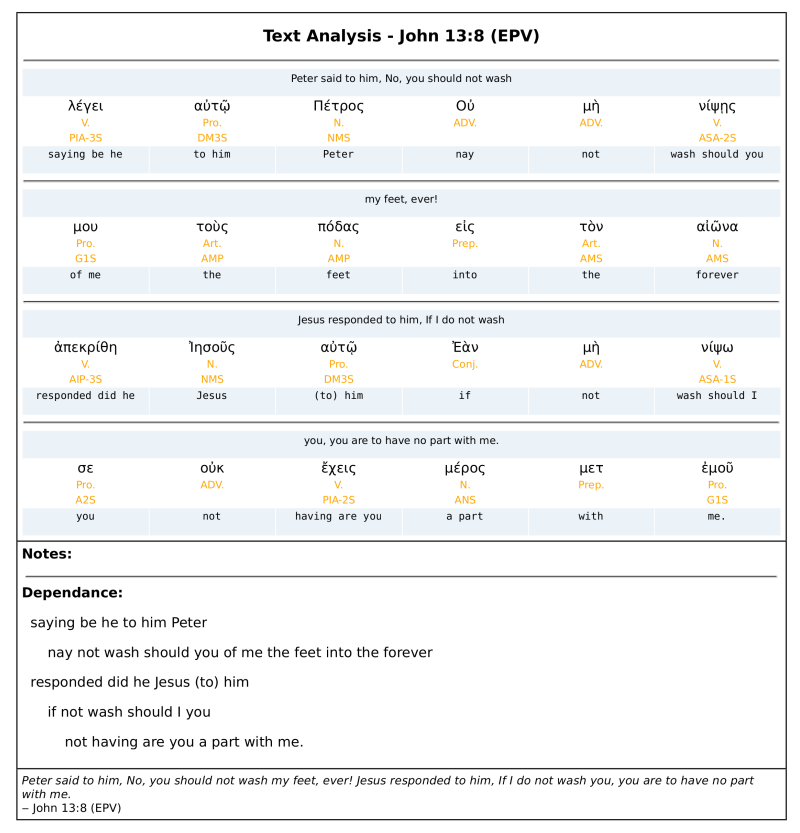 The writer of the Gospel of Luke fills in the missing details for us:

28 Ye are they which have continued with me in my temptations. 29 And I appoint unto you a kingdom, as my Father hath appointed unto me; 30 That ye may eat and drink at my table in my kingdom, and sit on thrones judging the twelve tribes of Israel.
-- Luke 22:28-30 (KJV)

If Peter could not exercise the grace necessary to accommodate Jesus' act of humility, then there would be no place for him at Jesus' table, and no throne upon which to sit governing the twelve tribes of Israel in Jesus' kingdom.