Acts 11:20 according to the Codex Sinaiticus

The following is the Greek text of Acts 11:20 according to the Codex Sinaiticus: 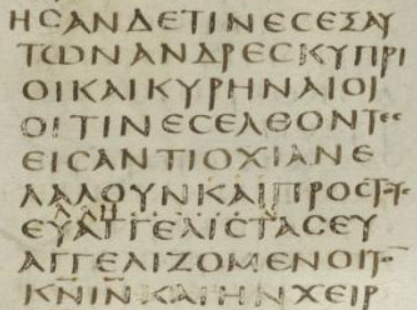 The Codex Sinaiticus appears to have the reading ευαγγελιϲταϲ (as opposed to Ἑλληνιστάς of the Textus Receptus) with some marks above it. How authentic is that reading, and what do the marks indicate?

The supralinear dots in Sinaiticus are erasures. As Bruce Metzger explains in his Textual Commentary on the Greek New Testament,

The first hand of codex Sinaiticus, which already in ver. 19 gives the meaningless Ἰουδαῖοι without subsequent correction, writes in ver. 20 the equally meaningless πρὸς τοὺς εὐαγγελιστάς which, however, has been corrected by a later hand to Ἕλληνας.

It works this way in OP's image -- the top two lines representing line 7 of the image with its supralinear insertions, while the bottom row's a-n mark positions, used for the notes below:

The resulting text is as described by Metzger, above. 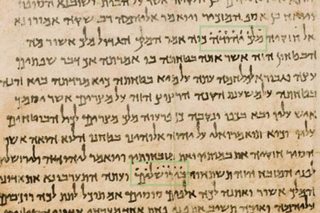 The discussion from which Metzger's comment quote above was drawn runs over two pages. The UBS Greek New Testament apparatus -- on which Metzger also worked -- assigns this reading a {C} evaluation, on its scheme of A/B/C/D assessments:

The letter C means that there is a considerable degree of doubt whether the text or the apparatus contains the superior reading....

Among older scholars, R.J. Knowling's Acts commentary for The Expositor's Greek Testament, Vol. 2 (Hodder & Stoughton, 1897), p. 266, has an unusually long note on this variant. The debates are not, however, around the original reading of Sinaiticus. A glance at the spread of witnesses for the different readings quickly demonstrates why -- this in addition to its nonsensical meaning, as mentioned above:

The * indicates a manuscript reading by the original scribe; superscript letters designate later hands.
Note, too, that ℵ is the siglum used for Sinaiticus.

Metzger's discussion begins with the observation: "The textual problems of this verse are compounded by the diversity of views concerning the meaning of Ἑλληνιστής." An immediate problem is F.F. Bruce's observation (The Book of Acts, NICNT, rev. ed. [Eerdmans, 1988] , p. 223 n. 16) that it is often used interchangeably with Ἕλλην, so that it isn't clear whether the "Hellenized Jews" vs. "Pagan Greeks" distinction in my glosses above is valid.

Bruce's argument -- that since the Jews were already evangelized, the preferred reading must be #2 -- is offset by the stronger manuscript support of #1, thus the preference of the text critics in so many editions.

What no one believes is that the original text of Sinaiticus has any hope of being "genuine": the only attractive explanation for its text is that the scribe already had the whole phrase in mind, and produced this word in anticipation of the following εὐαγγελιζόμενοι, again suggested by Bruce. It also possibly implies that the parent text of Sinaiticus -- whatever that scribe was copying from -- had Ἑλληνιστάς (see, briefly, Knowling's discussion).