Stack Overflow for Teams is moving to its own domain! When the migration is complete, you will access your Teams at stackoverflowteams.com, and they will no longer appear in the left sidebar on stackoverflow.com.

Check your email for updates.

Note- This is not a duplicate of Is Joshua 21:36-37 authentic or an addition? because I am asking what the source of the hebrew of those two verses is, and for the BHS specifically. So for example, the answer to that question says "These words do appear appear in the LXX and the Vulgate, but not in the Masoretic text of the Second Rabbinic Bible" But that wouldn't answer my question, of what the source for the Hebrew is.

Looking at a hebrew bible called "BHS reader", (BHS being Biblia Hebraica Stuttgartensia), I see it has two verses in Joshua Chapter 21, that are not in my Feldheim Tanach Simanim

The BHS has those verses, which it puts in small writing (actually i'm showing a pic from the BHS Reader, which is based on the BHS)

here is a screenshot of the Leningrad Codex, showing Joshua chapter 21, making clear the two missing verses. (Note- missing may be the wrong word to use). Contrast with the BHS. 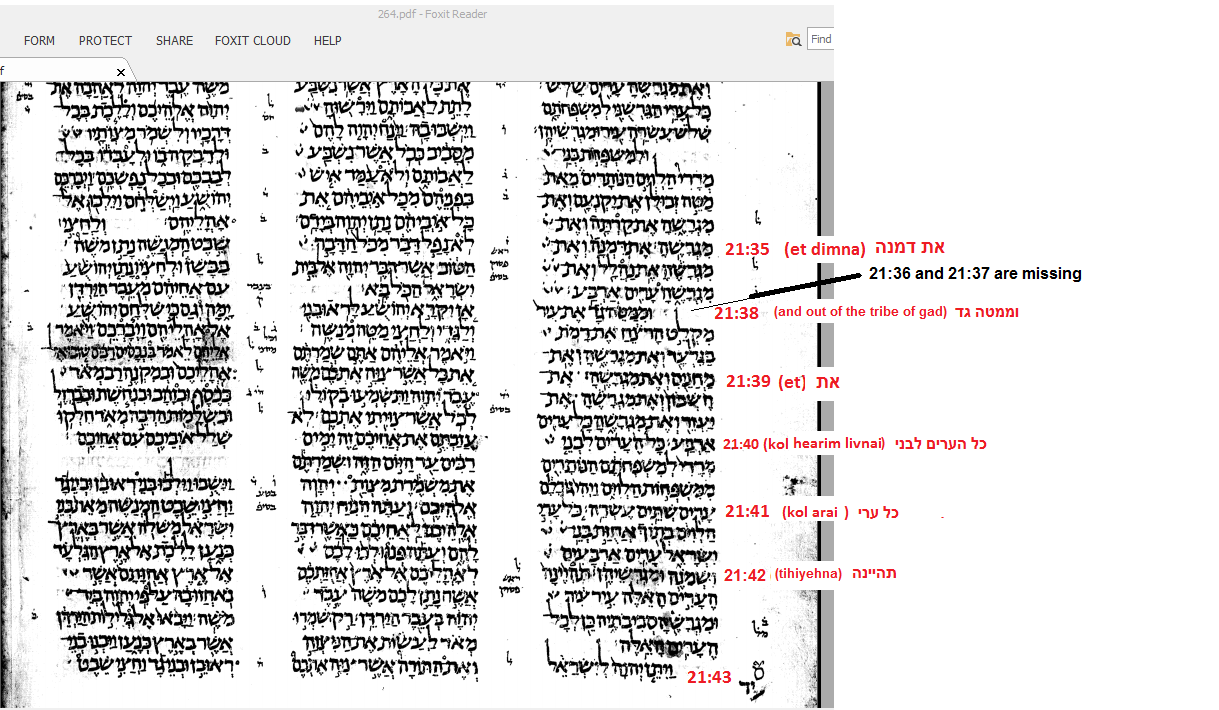 I understand that the BHS is based on the LC(Leningrad Codex).

So, what manuscript(s) has the BHS used to get those verses?

I don't usually do tl;dr summaries, but it seems it might help in this case...

A: the majority of Masoretic Hebrew manuscripts other than Leningradensis; see end of post for more details.

In fact, the BHS itself provides the answer to the question, although in quite an opaque form. The information is in the apparatus at the foot of the page, linked by the superscript "a" by the verse number (36): 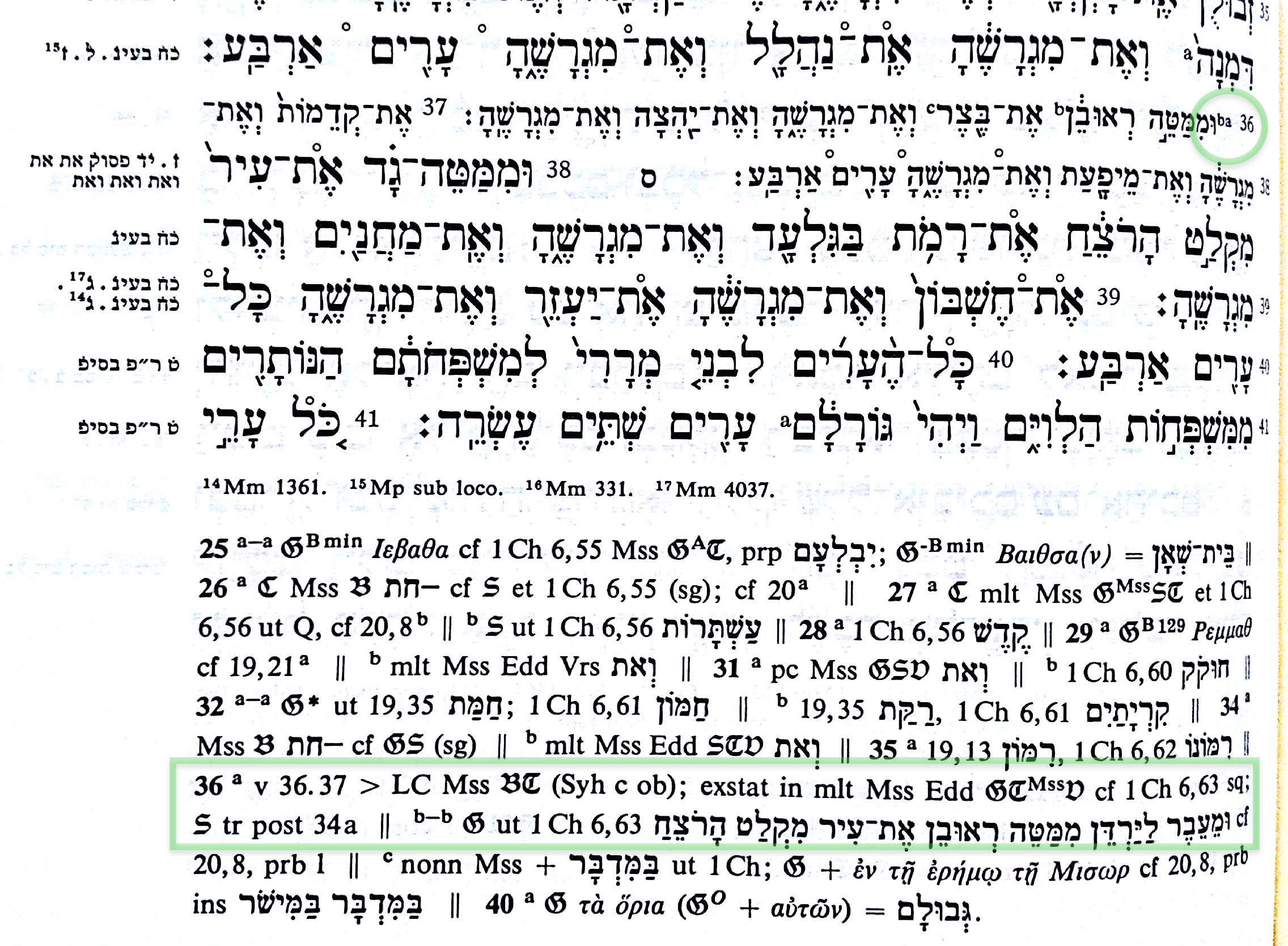 Here's a "key" to that footnote:

* The letter shape of the "Fraktur-T" symbol differs from that of "Blackletter-T" as found in BHS, also true of the Vulgate symbol which appears towards the end of the note; I don't think there are unicode entities for these precise letter-shapes, but if someone knows them, please do edit!

†The Sigla of BHS use the abbreviation "Ms(s)" to indicate collections of medieval manuscripts, and refers readers to the standard treatments in this way (see further on de Rossi below, and see barlop's answer for the contribution of Ginsburg):

Unusually at this point, then, BHS does not simply represent Codex Leningrad, but introduced text commonly found in the wider tradition of Masoretic manuscripts (and other ancient sources), signalling this "plus" by means of the reduced font size. It doesn't often happen like this in BHS!

But what is the explanation for this situation?

(1) It's sometimes the case in manuscript transmission in antiquity that parallel passages get fused to some extent in the copying process, probably inevitable in a situation where the scribes would know the parallel passage well. It might in some cases even have been intentional -- with the best of intentions -- to bring about some harmonization between the parallels. That would be one explanation for what has happened in the case of these two lists of Levitical cities from Joshua and Chronicles.

(2) The unusual step of BHS to include this text here signals a different explanation, pointing to a conviction that these verses are originally part of MT Joshua, but have dropped out of part the Hebrew manuscript tradition (which included the Leningrad Codex), while being maintained otherwise and also (consistently) among the ancient versions, although the Targumim give a mixed picture for Aramaic.

So, for example, among older commentators, C.F. Keil (1880, p. 214 n.2) points out that not only does the evidence of the manuscripts point towards inclusion, even the MT text of Joshua depends upon it, for otherwise its own totals here for the Reubenite cities does not tally (a point echoed by George Cooke, 1918). The rationale for the omission is that the scribe's eye jumped from the וממטה which begins v. 36, to the same form which begins v. 38, missing out the intervening text (i.e. "parablepsis owing to homoioarcton" if you like the technical terms).

Thus, (2) has widespread support, and explains the unusual course of action taken by the editors of BHS here. The essential point is that these verses persisted in Hebrew in other MS traditions, and their antiquity is attested in the versional evidence.

These may still most conveniently be found in Jean Bernard de Rossi's Variae lectiones Veteris Testamenti ex immensa mss. editorumque codicum congerie haustae..., Vol. 2 (Regio, 1785), pp. 96-106. It is very unusual to have nine pages of discussion (it begins at the very end of p. 96). The Hebrew witnesses are initially listed on p. 97:

OP should be able to satisfy the impulse to look for "Hebrew sources" there.

Ginsberg's work, written in 1896, predates the BH/BHK/BHS and covers the first and second rabbinic bibles by bomberg, which are from the 1500s. It describes some hebrew masoretic manuscripts that have and some that don't have, those two verses. Though which ones the BHS used is another matter.. But perhaps the closest we can get is this.

David provided a comment with a screenshot included here, showing that the BHS in its explanation of Ms(s), mentions Kennicott, and De Rossi and Ginsberg, and perhaps others.

Furthermore, here is a screenshot from BHS 5th edition, we see that Ms(s) includes more than those three(eg the Cairo Geniza is mentioned), and that Ed(d) also mentions those three. 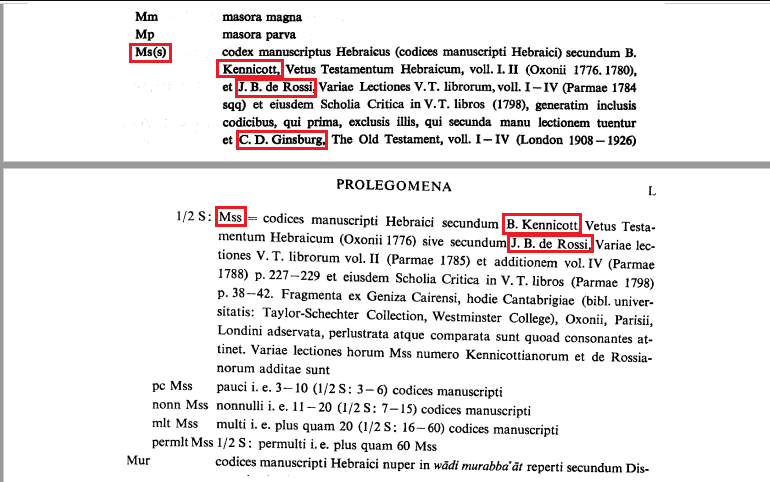 So therefore since BHS mentions those works, it makes sense to look at those works. kennicott, de rossi, and ginsberg.

As you see from the screenshot, BHS also mentions fragments from the cairo geniza, (there has been a project to digitize the cairod geniza https://cudl.lib.cam.ac.uk/collections/genizah/1 )

According to https://stepweb.atlassian.net/wiki/spaces/SUG/pages/24215583/More+about+OT+Editions Ginsberg's work only looks at "manuscripts from the thirteenth century onwards that were in the British Library". 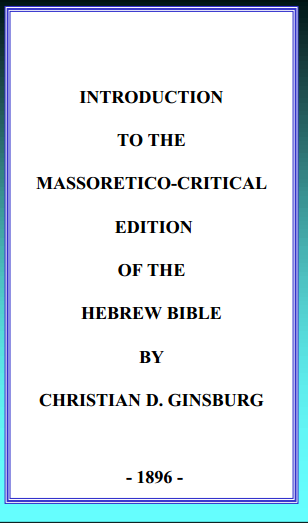 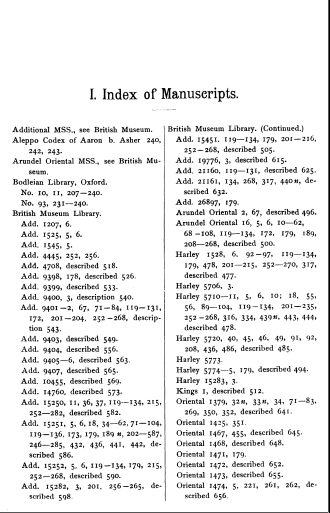 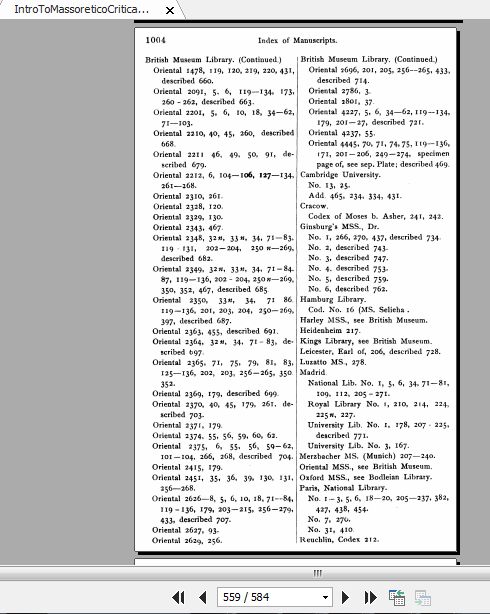 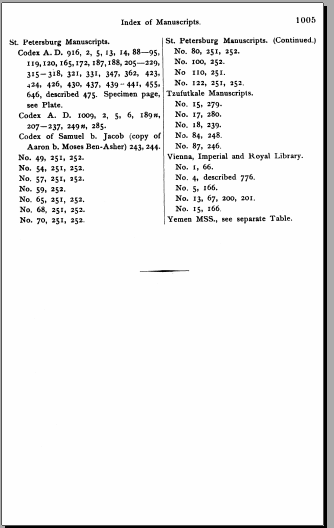 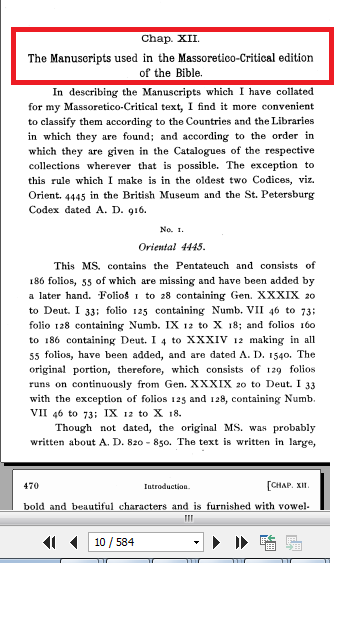 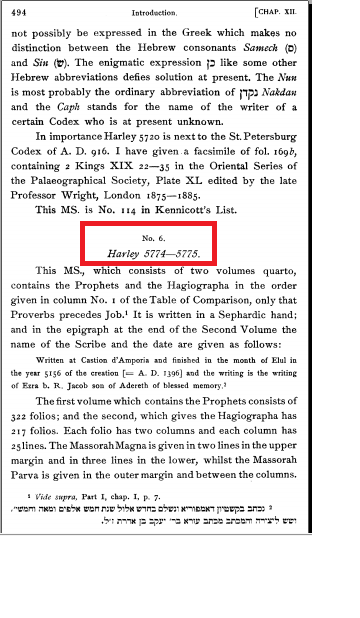 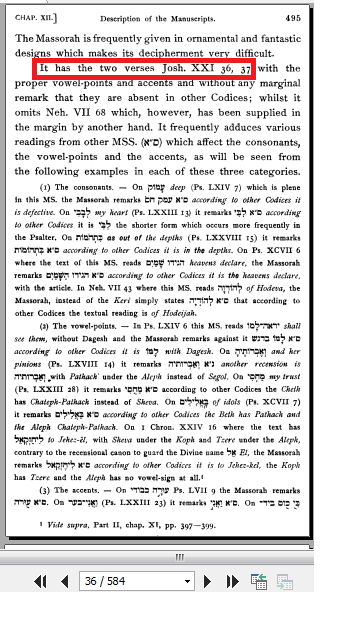 He discusses the St Petersberg Codex (that became known as the Leningrad Codex when the city Petersberg got renamed Leningrad in 1924.. But at the time Ginsberg was writing it was known as the St Petersberg Codex). Though he doesn't mention those verses in connection with that codex(though we know, as shown from the question, that those verses aren't in that codex). But he does describe other codexes too and with those, he sometimes makes mention of whether they do or do not have those two verses. 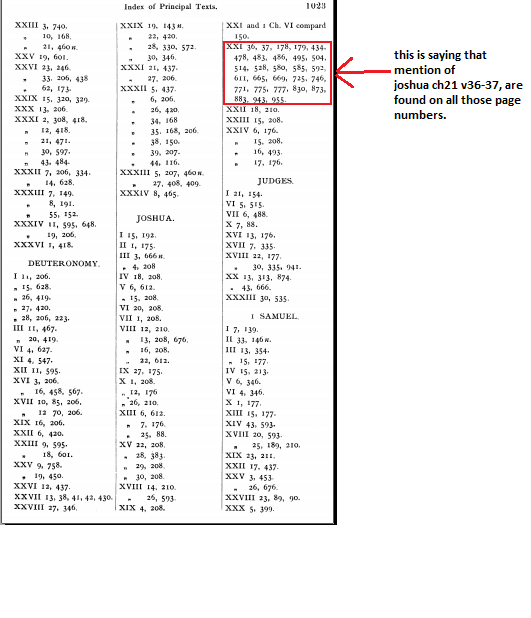 7
Is Joshua 21:36-37 authentic or an addition?
2
Approximately how many manuscripts of the Old Testament are extant today?

1
What is the manuscript evidence for the reading "apart from God" in Hebrews 2:9?
7
Why does the BHS suggest היום for האישׁ in Jeremiah 20:16?
1
Does the Codex Sinaiticus contain the Hebrew Tetragrammaton or Greek LORD (KURIOS)?
0
Where did the Israelites get the old corn in Joshua 5:11?
5
Where, if anywhere is Psalms 22:16 in Qumran Dead Sea Scroll 4Q88/4QPs f?
3
What did Joshua write in Joshua 8:32?
2
Was the Beloved Disciple laying on Jesus's Lap?
2
Two questions from Joshua 5:1-9
2
What are the *theologically significant* differences between MT and DSS?