Is rhetorical analysis, in and of itself, sufficient to make a valid argument for authorial intent, in the context of biblical hermeneutics?

I base this question on Krajewski's opinion that

"the dialogue associated with rhetoric also defines hermeneutics--where one enters into a conversation with a text" (Krajewski, B. (1992). Traveling with Hermes: Hermeneutics and rhetoric. Amherst, MA: University of Massachusetts Press. (p. 8))

Also, he seems to imply that some devices of interpretation have critical dependencies on rhetoric as it appeals to Ockham's razor.

"any attempt to justify an interpretation cannot rely on syllogistic proofs or absolute truth but must instead appeal to the probable and the common--the rhetorical" (p. 12).

I have tried to make this question as specific as possible. I understand that some might consider it too void of qualification. However, I would like to avoid erring on the side of presumption, with regard to what those qualifications might be. So, if you have caveats, feel free to express them.

First Edit:
My initial apprehension, regarding this question, was one of scope. I regret, that in the process of negotiating that concern, I become remiss in terms of presumption, with regard to my audience. This is a significant embarrassment to the subject of my post, considering that it is Cicero's (all controversy of authorship aside) first principle of [Invention], the first canon of rhetoric, found in his first century Latin text(Rhetorica ad Herennium). For me, that is too many firsts to excuse.

As a result, I may have inadvertently been responsible for drawing at least one individual into an embarrassing situation. Please accept my apology along with the following clarification which I had no right to assume, even in an academic setting.

(Provision of Ethics) Roland Meynet, Jesuit, Doctor-es-Lettres, has taught for twenty years at St. Joseph University in Beirut and the Pontifical Biblical Institute in Jerusalem. For twenty years he has been teaching Biblical Theology at the Pontifical Gregorian University. In 2006 he was awarded the Grand prix de philosophie de l'Académie Française.

Here is an English translation, composed of his topics relating to rhetorical analysis and exegesis, taken from this source.

My clarification based on these sources:

Rhetorical analysis is not rhetoric. It is a specific paradigm of critical analysis, which holds rhetoric as its subject; assuming at least, Cicero's first three canons. Being that biblical exegesis is the context, I have excluded the fourth and fifth canons, which apply mainly to oration and gesture. However, in the case of any coincidental narrative which provides insight to the authors passion, such as tone of voice or gesture, these should be considered when attempting to derive the authors intent.

This is nowhere near a complete definition of rhetorical analysis. The grasp that anyone may have of this; its concepts, will be directly proportional to their comprehension of rhetorical devices; the subject of analysis.

Apparently, I also need to include a definition for rhetoric. Once again, my apologies.

This first definition, from Mariam Webster, is the one we are concerned with.

rhet·o·ric
-the art of effective or persuasive speaking or writing, especially the use of figures of speech and other compositional techniques.

Greek literal is "to say". Reason->rhetoric, is as, soul->body. This is the only association in which these two words can be brought into union, with respect to their disparate, and persistent etymologies.

Rhetorical analysis is simply the analysis of the way in which a speaker or writer attempts to make their point. In doing this, according to rhetoricians, a speaker or author will appeal to one of three modes of persuasion: Ethos, Logos and Pathos. These are known as the Rhetorical Triangle: 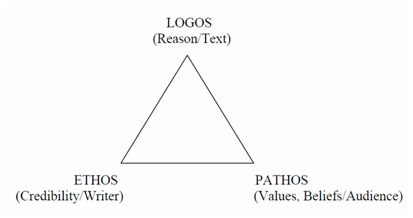 Rhetorical analysis then is analysis of the use of Ethos, Logos and Pathos to persuade an audience. According to Krajewski then, in the case of Scripture, The Bible is the Subject of the Rhetorical Analysis; that is it is the Rhetoric being analyzed. It is pure reason which is used to analyze a work of Rhetoric.

In an ideal world...

But in the real world...

The Greek philosopher Protagoras points out that truth is not objective, or at least our perception of truth is not. And we can see this occur in the formation of denominations. For example, this can be seen in the doctrines of Predestination. Both an Armenian and a Calvinist will claim a "plain and obvious" reading of scripture, yet will arrive at opposing conclusions regarding the nature of God and the free will (or lack thereof) of mankind. There are many other doctrines and passages like this that have led to many denominations in Protestantism.

It depends on the Hermeneutic framework

In order to account for the realities of Protagoras' epiphany that truth is subject to the perspective of the beholder, Albert C. Outler outlined the Weslyan Quadrilateral in his introduction to John Wesley's writings in 1964.. In this framework, it is recognized not so much that truth itself is relative, but that our ability to perceive truth has been corrupted at the fall of mankind. As such, we cannot help but hold inaccurate views of truth. According to Wesley and Outler, Truth comes from Scripture. In order to help us guard against misinterpreting scripture, we need 3 main tools for determining the meaning of said scripture (which is the process of hermeneutics) These tools according to Wesley and Outler are Reason, Tradition and Personal experience (revelation). According to Outler and Wesley, we need to understand that we will necessarily view truth/scripture through that lenses. But Outler and Wesley also taught that these 3 things alone were not sufficient in and of themselves, the must be placed on the foundation of Scripture (this is know as prima scriptura.) This is often depicted in the following manner(s): 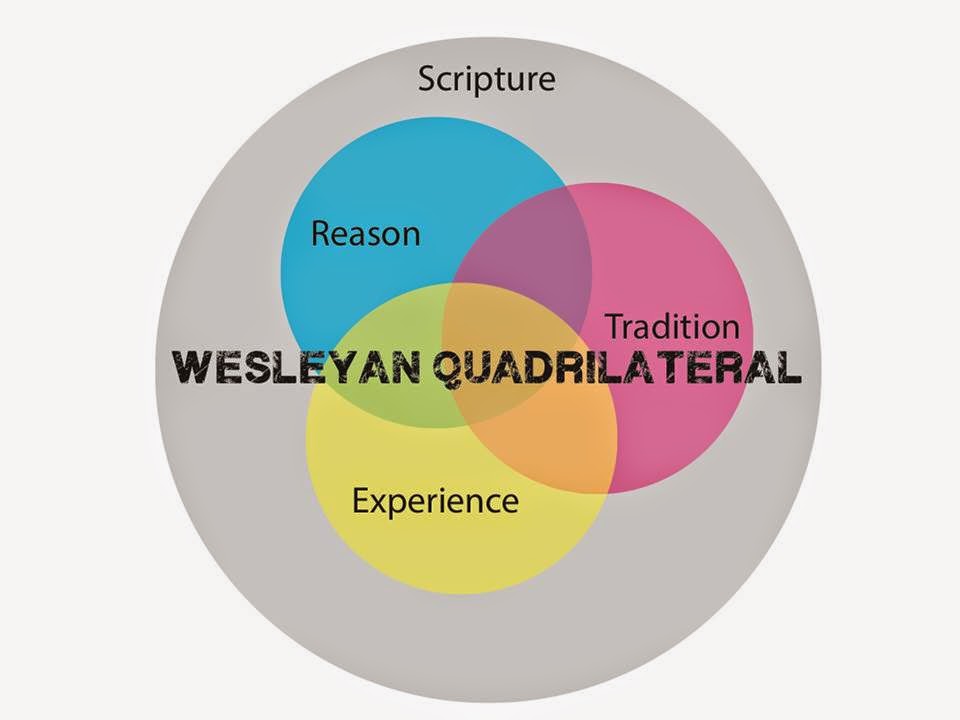 So it is not just Reason/Analysis and Scripture/Rhetoric needed, but these must be supplemented with Tradition and Experience in order to fully understand the meaning of scripture.

This idea that our perspective influences how we interpret the text (and vice versa) is known as the Hermeneutical Circle. In terms of the Wesleyan hermeneutical method, it is clear that no, reason/rhetorical analysis alone is sufficient in and of itself unless there is no tradition surrounding the text in question and you have no experience or personal revelation regarding the text. Other methodologies may differ, but I think it is clear for at least this hermeneutic framework, usually one can not only appeal to the rhetorical.

Now, one might claim that Wesley is simply using tradition as Ethos and experiences as Pathos to persuade that one's audience that their analysis of Rhetoric/Scripture is the correct one. While the theologian might do so, for the individual, the one they are persuading is only themselves. They have no audience to persuade. Furthermore, it is not a given that these areas will work in favor of the individual or theologian. Perhaps tradition contradicts yet the individual concludes that Reason, Scripture and Experience override traditional values. Similarly, it is not a given that the interpreter's audience (if they even have one) will share their experience or personal revelation. Furthermore, experience is something more than just a feeling shared with an audience. It may be revelation received from the divine Holy Spirit himself - which is well above and beyond the empathy, values or beliefs of an audience. In these ways, tradition and experience are markedly distinct from Ethos and Pathos. For the theologian, these supplement the triangle resulting in a Rhetorical pentagon and for the individual seeking to determine a proper interpretation, there is no pathos to speak of.

Hermeneutics is, according to the Shorter Oxford English Dictionary (6th ed.),

a branch of knowledge that deals with (theories of) interpretation, esp. of Scripture.

In the source you quote above, Krajewski seems to be defining a particular hermeneutic principle, and not hermeneutics itself.

Hermeneutic principles can be arbitrary. I can, for example, define a hermeneutic that proposes that secret meanings can be found in scripture by transposing certain words into numbers.

Not the answer you're looking for? Browse other questions tagged hermeneutical-approaches or ask your own question.

5
What is "the hermeneutical circle"?

2
How does the rule of non-contradiction differ between Greek logic and Biblical Hermeneutics?