Why does the KJV use “made flesh” in John 1:14 when other translations use “became flesh?”

And the Word was made flesh, and dwelt among us, (and we beheld his glory, the glory as of the only begotten of the Father,) full of grace and truth.

[14]And the Word became flesh, and dwelt among us, and we saw His glory, glory as of the only begotten from the Father, full of grace and truth.

14 And the Word became flesh and dwelt among us, and we beheld His glory, the glory as of the only begotten of the Father, full of grace and truth

14 And the Word became flesh and dwelt among us, and we beheld His glory, the glory as of the only begotten of the Father, full of grace and truth

14 And the Word became flesh and dwelt among us, and we beheld His glory, the glory as of the only begotten of the Father, full of grace and truth.

Why is the KJV different from other translations

I would translate John 1:14 as follows: 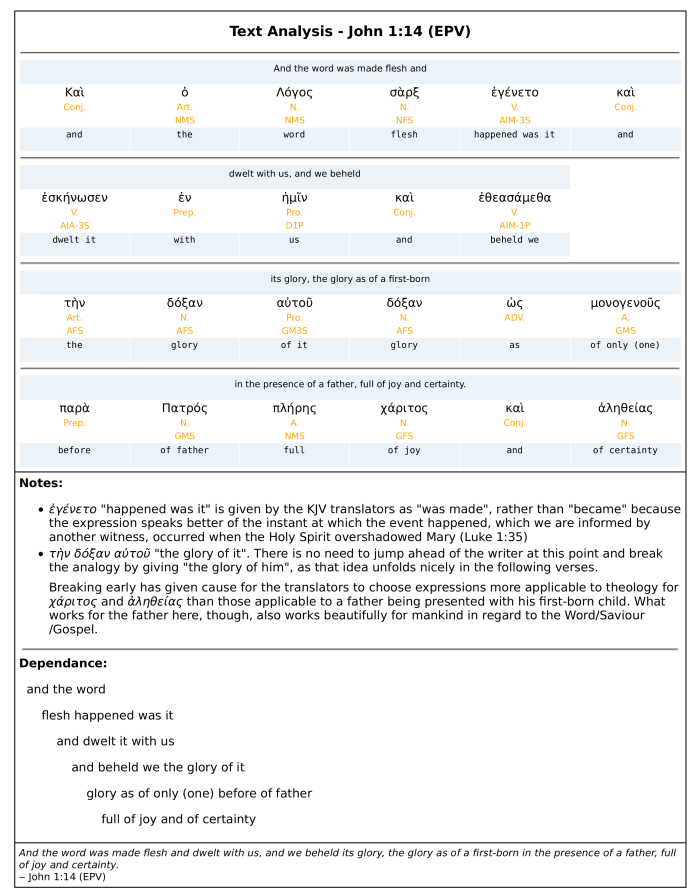 You will never know the exact reason for such differences in translation. The nature of the question, however, invites supposition. So, I suppose that it may be related to the mindset of the KJV translators, who would have been moved to make a connection between what the writer of John says here and what the writer of Luke records regarding Jesus' conception (Luke 1:35) -- such miraculous events are not so easily accommodated nowadays.

There really isn’t much difference in the meaning, and both are suitable translations of ἐγένετο in this context.

On the verb γίνομαι, from which ἐγένετο is conjugated, Wilke (translated by Thayer) wrote,1

The only difference I can appreciate is that “became” isn’t characterized by the passive voice as “was made” is. “Became” is more akin to a middle-voice verb.

I offer the following translation of John 1:14

A typical English translation reads like this: "And the word became flesh and dwelt among us, (and we beheld its glory, the glory as of the only begotten of the Father,) full of grace and truth." John 1:14

Most Christians believe Jesus is the word that became flesh. I am challenging this translation on Biblical grounds. I do not believe the word of God become anyone's flesh. The word of God comes to dwell in Jesus and dwell in his followers.

Similar verses are found in the O.T. where "came to" is translated from the Hebrew (Strong's 1961 "way hi") which has the same meaning as the Greek "egeneto."

There are no scriptures to support the Greek to English translation "the word became flesh" in the Bible. The truth is established on the basis of two or three witnesses and that means we do not build a doctrine on one verse. There are no other verses in the Bible to support the idea that the word of God became Jesus. God prophesied that he would place his own words into His Messiah and he would speak all that God commends him (Deuteronomy 18:18). The scriptures only support the word of God coming to people and dwelling in them.

The way John 1:14 reads when the corrections are made is as follows: "The word came to humanity and dwelt in us, and we witnessed its glory, glory as like the only begotten of the Father, full of grace and truth."

Note: the glory they witnessed is "as like" that of the only begotten of the Father? There is no doubt the 12 disciples witnessed Jesus. They would have felt the effects of the word of God (the Gospel) coming into them and enlightening them with the same light Jesus had in him. They would have felt the effects of being full of grace and truth when they received the Good News Jesus preached.

As further proof to support my corrections from Greek to English I rely on Deuteronomy 18:18 which is fulfilled in John 1:14:

"I will raise up for them a prophet like you from among their fellow Israelites, and I will put my words in his mouth. He will tell them everything I command him." Deuteronomy 18:18

Where does God say in the above verse that he will make his word become the flesh of His prophet? There is a big difference between the word becoming flesh and God placing his word into Jesus and the word dwelling in us. Not one OT prophecy states that God's word will become the flesh of Jesus or anyone else. This is 100 percent proof that the translation I propose above is what John had in mind.

The word is GOD. John 1:1 By the word of the LORD were the heavens made; and all the host of them by the breath of his mouth. Psalms 33:6

The Spirit gives life; the flesh counts for nothing. The words I have spoken to you--they are full of the Spirit and life. John 6:63

The word of God ALWAYS works in conjunction with His spirit. YHWH expressed himself in the O.T. by placing His eternal "word" into His prophets and commanding them to speak His messages, and in these last days he has spoken to us through His Son, Jesus Messiah. Hebrews 1:1-2

The above based on my own research. Verses quoted are from KJV, NIV, or REV Bible. I have not found anyone else who has translated John 1:14 in this way. If anyone wishes to use the above for non profit purposes they are welcome to as long as they contact me for information about giving me appropriate credit for my work, writing, and research.

Not the answer you're looking for? Browse other questions tagged translation-philosophy or ask your own question.

13
What translation philosophies have caused such a wide variation in the translation of *tachash* skins?
5
Various translations of Psalm 19:3
7
Why does Matthew use the plural form of “Key(s)” as opposed to other singular references according to the original Greek texts?
3
Who made the election in 1 Thessalonians 1:4? Election of what?
2
Why does the ESV use “surely” in Genesis 2:16 when all others say “freely”?
1
Why do some translations translate eternal life (ζωὴν αἰώνιον) in different ways?
4
How can we understand Romans 4:19 in the light of different translations?
0
Does John 14:23 involve a “physical” house?
1
(1 John 3:5-10 & 1 John 5:18)Alexandrian manuscripts relatively practical, level-headed while Byzantine manuscripts are rhetorical hyperbole-like
1
Why does Proverb 22:20 say “thirty sayings” in some translations and “excellent things” in others?