How should νεόφυτος be understood in 1 Timothy 3:6?

In the list of qualifications for an ἐπίσκοπος in 1 Timothy 3, one of the qualifications, which is unique to this list, is the statement "Not a novice..." In the Greek, this word is a New Testament Hapax Legomenon, though attested in the LXX and other Koine sources.

In many lexicons, it is simply defined as "Newly planted, new convert." (My summary) The reasoning and sources leading to this interpretation are usually missing, however.

What is the semantic range of νεόφυτος, and how should it be understood in this particular context?

The Greek adjective νεόφυτος1 and its declensions occur four times in the LXX,2 all in contexts referring to a plant.3 The adjective itself is composed of νεο- meaning “new” and -φυτος, meaning “planted,” hence the meaning “newly planted.”

The Church is depicted in the New Testament by metaphor as a vineyard, just as it is depicted as a flock,4 and the Lord Jesus Christ is the owner of the vineyard5 and the shepherd of the flock.6 Hence, as a member of the Church (vineyard), a newly baptized Christian convert is also depicted by metaphor as a newly-planted plant (νεόφυτος).

By planting, the apostle Paul means making converts (i.e., new plants in the vineyard). By watering, he means edifying, exhorting, and teaching (i.e., nourishing the growth of the newly-planted plants).

Furthermore, the apostle Paul did not say that “the younger man” (ὁ νεώτερος) was disqualified from being a bishop (for Timothy himself was a young man), but rather, the ὁ νεόφυτος—the newly baptized or newly catechized.

“Not a newly-planted man,” he says. Here he does not mean, “[Not] the younger man,” but rather, “[not] the newly-catechized man.”

Compare the following entries in the LSJ lexicon:

The same conclusion may be demonstrated using another group of words: 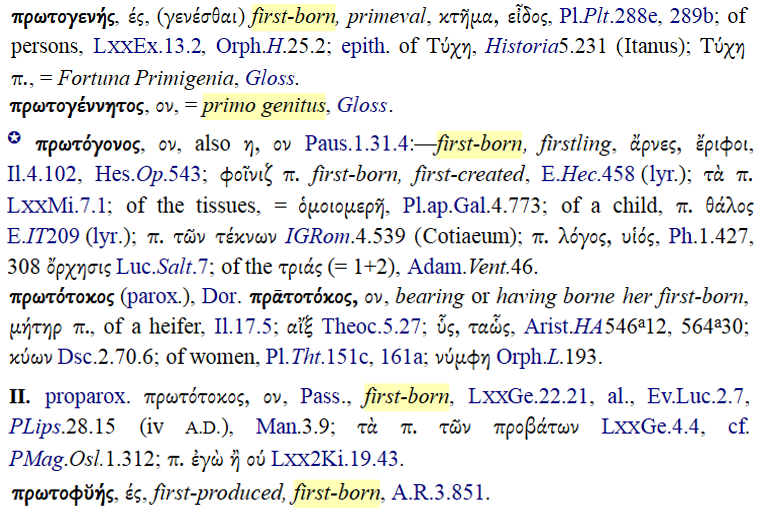 Now, returning to νεόφυτος, let us recall that ἀρτίφυτος was synonymous with ἀρτιφυής; therefore, the suffix -φυτος was equivalent to -φυής. Of course, as we just demonstrated using two different sets of words,

Now then, νεόφυτος means, not only “newly planted” in its literal sense regarding plants, but also “new(ly) born” or “newly begotten.” It then becomes a fitting phrase for a recent Christian convert, for they are newly born or begotten (again) upon believing in the Lord Jesus Christ.

This answer was composed by Der Übermensch, formerly user862.

Not the answer you're looking for? Browse other questions tagged greek 1-timothy hapax-legomenon or ask your own question.