In Matthew 2:1, should the word be translated "when" or "after" Jesus was born?

In some translations, such as the KJV, we have "when" Jesus was born in Bethlehem. In other versions we have "after" Jesus was born in Bethlehem. When I looked at an interlinear to learn more, I don't see either word spelled out. Are these words added by the translators to keep the sentence grammatically correct? The Interlinear Greek-English New Testament by Alfred Marshall is also vague on this. Would this page be a more accurate translation?

Personally, I believe the sentence, "Jesus was born in Bethlehem of Judea" belongs at the end of the previous chapter, not in chapter 2 with the wise men, because it misleads the reader into thinking the birth was quickly followed by the wise men. The men visit a "young Child," not a baby, in a "home," not a manger.

Structurally, the genitive absolute consists of the following:

Semantically, there are again three items to notice, once the structure has been identified (note that the above stated structure is not limited to the genitive absolute construction):

He then provides several examples of translating the genitive absolute (one of which is provided below):

The Translation of the Participle

However, all his examples have a present tense participle in the genitive absolute, which would warrant the translation “when” or “while.”

As we saw in the English examples above...the [present] participle often replaces a clause: a when or while clause (temporal, telling you when), or a who clause (relative, describing further, or specifying which one).

On the other hand, the participle γεννηθέντος in Matt. 2:1 is conjugated in the aorist tense.

The aorist participle is used to indicate a single action (rather than a process), and normally one which has already happened at the time of the action described in the main verb of the sentence.

Most importantly, he wrote,5

The uses of the aorist participle, the effect of the article, and the possible introductory words in translation (when..., who...etc.) are similar to those of the present participle, except that while... is replaced by after...

The Greek text may be translated into English as follows:

After Jesus was born in Beit Lechem of Judea, during the days of King Herod, behold, magis came from the eastern regions to Jerusalem.

Wallace, Daniel B. Greek Grammar, Beyond the Basics: An Exegetical Syntax of the New Testament. Grand Rapids: Zondervan, 1996.

I would render the verse this way:

Furthermore, upon the birth of Jesus in Bethlehem of Judea in the days of Herod the king, there were seen present in Jerusalem, wise men from the east. 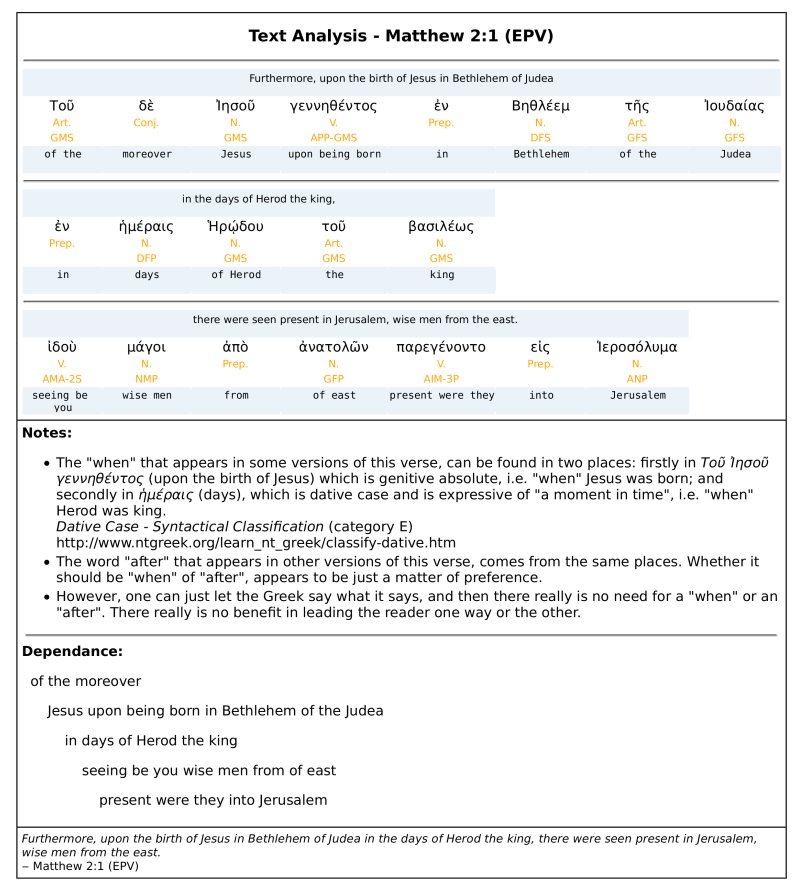 7
How should κοπιῶντες be translated in Matthew 11:28?
8
How should πονηρός be translated in Matthew 7:11, and why?
12
What were the wise men?
9
What can we infer from the different nativity accounts in Matthew and Luke?
1
Was Jesus born in the house according to Matthew 2?
5
Did the Wise Men see the Star of Bethlehem at the east?
1
In Matthew 24:3 how should Συντέλεια be translated?
1
Is Matthew 11:12 stating kingdom of heaven is associated with exciting and meaningful eventfulness?
6
How might the "magi from the east" (Matt. 2:1-2) have learned about the obscure birth of Christ, and its great significance?
1
What does προσκυνέω (translated *worship*) mean in Matt. 2:2?