Is Mount Horeb the same as Mount Sinai?

18 And when He had made an end of speaking with him on Mount Sinai, He gave Moses two tablets of the Testimony, tablets of stone, written with the finger of God. NKJV, 1982

Could these two mountains be same since the events mentioned at Horeb and Sinai are the same?

The data in the graphic below casts an interesting light on how often 'Sinai' and 'Horeb' are each mentioned in books of the Hebrew bible: 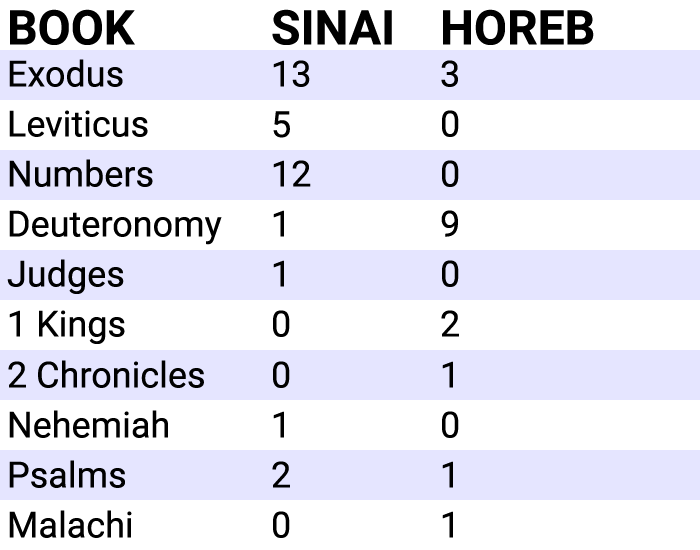 Only in three books do both names appear: Exodus, Deuteronomy, and Psalms.

Although the Book of Psalms only has a sample set of three uses total, the book is a composite text of many traditions and ideas, so it's unsurprising to see each name used (in separate psalms).

Exodus plainly prefers 'Sinai' over 'Horeb', and Deuteronomy the opposite. In neither book do the names 'Sinai' and 'Horeb' appear in close proximity to each other: 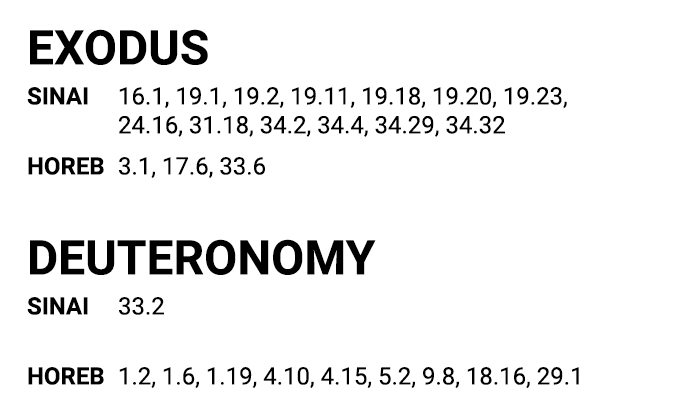 From a critical perspective this data heavily implies the two names came from alternate exodus traditions. The Old Testament: A Historical and Literary Introduction to the Hebrew Scriptures (ed. Michael D. Coogan, p 108) follows the four-source Documentary Hypothesis for the Torah, and states that 'Sinai' came from the Jahwist and Priestly sources while 'Horeb' came from the Elohist and Deuteronomist sources 'and related traditions'.

For example, this is evident in Deuteronomy: 'Sinai' is found only once, in a poetic text in chapter 33, while the nine instances of 'Horeb' are found in narrative prose; the poem in Deuteronomy 33 comes from a different sources than the main prose portions of the book. Richard Nelson, Deuteronomy: A Commentary, p 386:

Apart from an explicit reference to Moses (v. 4) and another possible allusion (v. 21), however, the association of the blessing with the rest of Deuteronomy is tenuous. It interrupts the connection between the command to go up to Nebo (32:49-52) and its execution (34:1-5). These last words of Moses are similar to Jacob's final blessing (Gen 49) and seem to be part of the redactional process that incorporated Deuteronomy into the Pentateuch.

As far as the overarching narrative in the Hebrew bible is concerned, Mount Sinai and Mount Horeb are the same mountain; they each identify the location where God formed his covenant with Israel after their escape from Egypt. Yet, the two names come from alternate exodus traditions, which were weaved together by the editorial process which produced 'the Torah'.

Yes, Mount Sinai and Mount Horeb are the same place. The names are used interchangably in Exodus itself. See Exodus 3:1, 14 and Exodus 33:6.

Here is the Jewish Encyclopedia Entry

They are the same mountain. Some people go by two or more names, and some places do too. Recall Jethro and Reuel, Moses' father-in-law. The current Mt. Sinai is to the west of the Gulf of Aqaba in the Sinai Peninsula. But it is described elsewhere as being in Arabia, more properly on the east side of the gulf. I personally believe that the mountain is in current Saudi Arabia, not Egypt. Moses crossed the Gulf of Aqaba at the parting of the waters. The Gulf of Suez extended further inland than today with many shallow reedy places. This was the part closest to the Israelites and Egyptians in the Land of Goshen (roughly Suez Canal area of today.) Whether the official Egyptian name was that name is of no great import (Recall places may have alternate names.) That branch of water being closest, the whole Red Sea of today is synonymous with the Sea of Reeds. This seems to be what the translators of the Septuagint believed, and they lived in Egypt and likely the best source for the name, though livihg many centuries later. So the Gulf of Aqaba would then be a part of the Sea of Reeds as it is a part of the Red Sea of today. As for the English pun: red reed, humph!

Wikipedia: Suez Canal: The abstract from the article is under the History section, 2nd Millennium: (You can follow the references of the article if you like, or google the subject under question. This shows that the Red Sea was closer to Goshen (toward the north).

[abstract] These lakes mentioned are shallow and suitable for reed growth. The legendary Sesostris (likely either Pharaoh Senusret II or Senusret III of the Twelfth dynasty of Egypt[12][13]) may have started work on an ancient canal joining the Nile with the Red Sea (1897 BC – 1839 BC). (It is said that in ancient times the Red Sea reached northward to the Bitter Lakes[9][10] and Lake Timsah.[14][15]) [end abstract]

Read any Bible throughout most of history in translation. It is generally translated as crossing the Red Sea where specifically the Sea of Reeds is mentioned in the Hebrew text. These are the expert opinions. Now we have dissenters in modern times. Many of these people do not believe in miracles, and the parting of the deep water of Aqaba sounds improbable or impossible. They have natural earthquake, or wind theories, and so on to explain the event described in Exodus. Google the matter if you want more.

Read Wikipedia: Mount Horeb article. Generally, the two names were seen to refer to the same mountain. There are some dissenting opinions.

Galatians 4:25 For this Agar is mount Sinai in Arabia, and answereth to Jerusalem which now is, and is in bondage with her children. (KJV)

Read the Wikipedia: Midian article about the location of Midian. It is in Arabia.

Exodus 3:1 Now Moses kept the flock of Jethro his father in law, the priest of Midian: and he led the flock to the backside of the desert, and came to the mountain of God, even to Horeb. (KJV)

Note where Jethro lived. Note where Moses was tending the sheep when he came to Horeb. This is the Horeb where God appeared to him. Now some claim and it is entirely possible that the nomads of Midian also grazed flocks on the west side of the Gulf of Aqaba where the currently named Mt. Sinai lies. Also check out 1 Kings Ch. 19. We see Elijah heading for Horeb from Beersheba. Beersheba is the southern part of Israel. Of course, Elijah could have veered west or east. There are mountain massifs on both sides of Aqaba.

Not the answer you're looking for? Browse other questions tagged psalms exodus or ask your own question.

4
What was written on the stone tablets?
2
Who wrote the second set of tablets in Exodus 34:27 & Deutoronomy 10:1-4?
3
Who were the priests the LORD was referring to prior to the giving of the Law and the ordination of Aaron? (Exodus 19:22-24)
5
Which are the other tests/complaints mentioned in Numbers 14:22?
1
Is the “ark of wood” the ark of the covenant?
10
What is the best interpretation of the “finger of God” in the Old Testament?
5
Usage of an uncommon Hebrew word for “shone” in Exodus
1
How big were the stone tablets?
1
Could the radiance in Moses face be linked to the golden calf incident and the second set of tablets?