What and where is the Kerith ravine?

Then the word of the Lord came to Elijah: “Leave here, turn eastward and hide in the Kerith Ravine, east of the Jordan. You will drink from the brook, and I have directed the ravens to supply you with food there.”

What is the significance of the name "Kerith"? How does it relate to the narrative? Why is Elijah commanded to drink from it's waters (or at least, why is it important to mention that he will drink from its waters) rather than say, by the nearby, reliable waters of the Jordan?

The Kerith Ravine is home to a river somewhere east of the Jordan, which marked the eastern border of the land given to Israel. On a purely physical level, it functions (unlike the Jordan) as a place far away and hidden from King Ahab who was seeking Elijah's life because of the drought. The name Kerith means a "cutting" or "separation." While having to do with the physical nature of the river itself - as seen in the photos Jon Ericson provided - it also points to the "cutting off" of Elijah the Tishbite from Ahab and the rest of Israel who at this time are going after idols.

The language of "cutting off" is continued in 18:4-5. While Jezebel is "cutting off" the prophets in the land, Ahab has Obadiah to try find pasture to save the animals from having to be "cut off." Symbolically, then, Elijah is killed, which is likely echoed in his being fed by ravens, who are known for eating carrion.

(Ravens were known to not even feed their own young (cf. Job 38:41, Psalm 147:9), so it is a serious indictment on Ahab and Jezebel that not only do they care more about the lives of animals than the lives of the prophets, but even the unclean ravens who neglect their own young care more for God's prophet. This indictment is then transposed in the second half of the chapter as now not unclean ravens, but unclean gentiles are the ones to care for Elijah.)

Elijah, however, does not remain "cut off." Just as after the widow's son is revived after Elijah stretches out on him three times, so after three years, Elijah returns from the ravine to confront Ahab and defeat Baal.

All of this is a mockery of Baal, who as the storm god was supposed to bring rain on the earth. Of course, the drought is a direct assault on the claims of Baal, but so is the death and resurrection theme. According to House (NAC), it was explained that the reason Baal did not always bring rain on the earth was because Mot, the god of death, would kill him every year and then his sister Anat would eventually take revenge on Mot and free Baal from death. Instead, it is shown that Yahweh is the one who has control over rain and life and death.

Beyond being a symbol of death, the ravine is also a symbol of the wilderness. The author of Kings draws a number of parallels throughout the book between Elijah and Moses who was before him. Both appear before a wicked ruler. Both flee for their life. Both fast for forty days and forty nights. Both experience wind, earthquake, and fire up on a mountain. Both prepare an altar consumed by God's fire from heaven. Etc...

Similarly here, the notion of drinking from the brook and being miraculously fed with bread and meat while in the land east of the Jordan reminds us of Moses and Israel in the wilderness being fed with bread and quail from heaven. This is why it is not the Jordan itself that Elijah drinks from; rather he is east of the Jordan, outside of the land, in order to show that Elijah is a new Moses and Ahab a new Pharaoh.

First, it seems that Wikipedia transliterates the name as Cherith. With that information in hand, I discovered an article [PDF] by James Tabor that mentions:

Directly across the Jordan River from the Aenon/Salim area is the rugged Wadi el-Yabis, which I take to be fairly securely identified with the famed “brook Cherith” associated with Elijah’s flight to escape death during the reign of King Ahab (1 Kings 17:1-8).

In "East of the Jordan" [PDF], Burton MacDonald sums up the research into the location:

The Hebrew word cherith means "cutting." This is not very helpful in locating Wadi Cherith since there are several deep-cut wadis flowing westward to the Wadi'Arabah-Dead Sea-Jordan Depression from both northern and southern Gilead.

I found several pictures of the location or one like it: 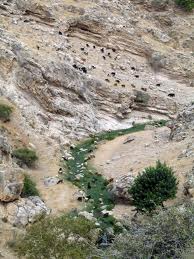 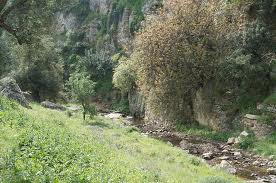 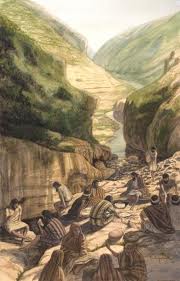 As you can see, the water level is very low and this would certainly be a stream that would dry up early in a drought. But for that reason, it would also be a safe place to hide if you could get enough food and water. The ravens would have provided the miraculous source of food and we can suppose that God also allowed a small amount of water to flow at the head of the Kerith for Elijah to live on. Therefore, Elijah would have, by necessity, put his life completely in God's hands.

Elijah may have been cut off from normal living...but he was not cut off from God. Obadiah was appointed to a role that challenged his faith but he remains faithful and does what he believes is right carefully. There are many interesting things to consider in these passages. Thank you for the write-ups and follow up questions. God bless you.

4
What do the days of Obadyahu's youth concern us?
5
What time was the evening sacrifice in 1 Kings 18:27?
4
Did Elijah break the Torah by encountering ravens and/or failing to appear at Jerusalem?
7
What is the meaning of Elijah's reply to Elisha in 1 Kings 19:20?
8
In 1 Kings 18:22 and 19:10 why does Elijah say he is the only prophet left?
5
Why wasn't Elijah's credibility affected after unclean birds (ravens) fed him for so long?
2
Did Jezebel also destroy the sons of Naboth as alluded to in 2 Kings 9?
1
Elijah's prayer for the widow's son
1
1 kings 17:7-16 - is this how prophets work?
1
Did God repent of the evil he had declared against Ahab in 1 Kings 21?