Is "בְּמֹתָ֑יו" Singular or Plural, and What is it's Meaning in Isa. 53:9?

"Violence not Because in his death the rich and with his engrave the wicked with And he made in his mouth (was any) deceit neither he had done."(Interlinear)

I am not a Hebrew Scholar, but my understanding, as well as the common translations say that בְּמֹתָ֑יו is singular, yet the BDB lists the יו as being plural. If my assumption is correct, then why was בְּמֹתָ֑יו(death) translated Singular, and what would this passage mean if it were understood in the plural?

The Hebrew word בְּמֹתָיו literally translates into English as “by/ in/ with his deaths.”

The plural declension of מָוֶת only occurs elsewhere besides Isa. 53:9 in Eze. 28:10 by means of the construct form מוֹתֵי, “deaths of”:1

10 “You shall die the deaths of the uncircumcised by the hand of strangers, for I have spoken it,” said Yahveh God.

It is noteworthy that the subject, the prince of Tyre,2 is said to “die the deaths (plural) of the uncircumcised.” Thus, like Isa. 53:9, there is a singular individual who is said to die plural deaths.

In his commentary on Eze. 28:10, Carl Friedrich Keil wrote,3

The plural מְמוֹתֵי and מוֹתֵי here and Jer. xvi. 4 (mortes) is a pluralis exaggerativus, a death so painful as to be equivalent to dying many times (see the comm. on Isa. liii. 9).4

Similarly, in his commentary on Isa. 53:9, Franz Delitzsch wrote,5

“They assigned Him His grave with criminals, and after He had actually died a martyr's death, with a rich man;” i.e., He was to have lain where the bodies of criminals lie, but He was really laid in a grave that was intended for the corpse of a rich man.”

מותי is a plur. exaggerativus here, as in Ezekiel 28:10 (compare (memōthē) in Ezekiel 28:8 and Jeremiah 16:4); it is applied to a violent death, the very pain of which makes it like dying again and again. The first clause states with whom they at first assigned Him His grave; the second with whom it was assigned Him, after He had really died a painful death.

Note: you copied both the grammatical niqud and the cantillation marks.

We only need the niqud

It is plural just like the word לָֽמוֹ in the previous verse. So basically you are reading a translator bias, who has changed the text, thus changing your view on who it's speaking of i Isaiah 53. If this was a true translation it would be left as deaths. Since the servant is identified as Israel and Israel is a collective of people the deaths does work and is appropriate, but it would not work since Jesus died 1 death, all the explanations and exegesis is not needed if the verses around it weren't also changed. If you read it plainly it is obvious that the he in these passages is Israel .

בְּמֹתָ֑יו certainly makes this an interesting verse. However, there really isn't anything that would support the idea it is plural. The root of the word is מָוֶת (Strong's H4194), which means "death" or "the dead" or "the place of the dead". There really isn't any room for multiples of these things. 1.

Here is what the KJV has:

And he made his grave with the wicked, and with the rich in his death; because he had done no violence, neither was any deceit in his mouth.

Here is what I have: 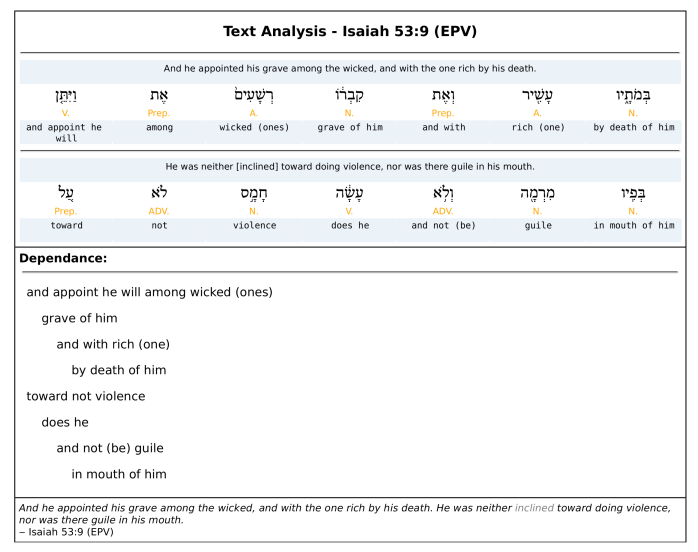 Notes:
1. The idea that the Servant dies multiple times makes a total mess of any Christian theology based on Romans 6:10 and Hebrews 10:10
2. Depending on the context the generic noun would be "one" in regard to persons, or "thing" in regard to objects, or "place" in regard to location.

It is deaths, and to understand the how and why Christ died two deaths google Arthur Prince Adams The Spirit of the Word and click on a subtitle We See Jesus and read through to the conclusion of The Loneliness of Christ where God willing you will understand this verse correctly.

6
What does "bless" [ברך] mean in Isa 45:23?
6
Does the past tense in the suffering servant song (Isaiah 53) refer to Jesus?
2
What is the best understanding of חָמָס in Isaiah 53:9?
2
In Isa. 6:1, does "high and lifted up" modify "throne" or "the Lord"?
1
Is the Hebrew word בוראיך in Ecclesiastes 12:1 singular or plural?
2
In Deuteronomy 10:17, are both אלהי and אדני plural or singular? If plural, how come they do not have ם at the end?
2
Isa 28:12 hebrew word margeah (meaning - refreshing) translated to greek suntrimma (meaning -destruction) why?
2
Why does Genesis 2:7 read חַיִּ֑ים plural rather than singular
4
Should there be a comma between "Wonderful" and "Counselor" in Isa. 9:6?
1
Does anything in the Hebrew text of Genesis 34:2-7 suggest that Shechem's actions against were less severe than Amnon's in2 Samuel 13:11-16?