In Leviticus 19:18 is "love your neighbor" meant to include all people or just Israelites?

This is translated in the King James as:

"Thou shalt not avenge, nor bear any grudge against the children of thy people, but thou shalt love thy neighbour as thyself: I am the Lord."

However, I recently came across on article from Richard Elliot Friedman in which he argues that the commandment was meant to be universal: [Love Your Neighbor: Only Israelites or Everyone?](http://www.biblicalarchaeology.org/daily/biblical-topics/bible-interpretation/love-your-neighbor-only-israelites-or-everyone/)

In Friedman's favor, the Hebrew text does not include the "but" conjunction that is inserted by the KJV (it is just an "and") thereby diminishing the inference of an intended contrast between the two commandments in the verse. In addition, the first part of the verse uses the phrase "בְּנֵ֣י עַמֶּ֔ךָ" which means "the children of your people," clearly limited to Israelites, but the second part of the verse uses "רֵעֲךָ֖," which means "your neighbor," which is ambiguous.

What do people think? Do you agree with Friedman that Love your Neighbor was meant universally or do you think that it was limited to Israelites?

hebrew referent-identification leviticus
Share
Improve this question
edited May 28, 2018 at 21:49

Yes, the command to "love your neighbor as yourself" is universal. This can be seen in Leviticus 19:33-34, where God says

33 ‘And if a stranger dwells with you in your land, you shall not mistreat him. 34 The stranger who dwells among you shall be to you as one born among you, and you shall love him as yourself; for you were strangers in the land of Egypt: I am the Lord your God.' (NKJV)

Not only were you to show love to the stranger, you were also to treat him as a native Israelite.

גר (ger), from which the word 'stranger' is translated in verses 33 and 34, primarily means a sojourner or a temporary resident, which would include any non-Israelite that was just passing through Israel:

Additionally, גור (gur), from which the word 'dwells' is translated in the same verses, also includes temporary residents:

The Israelites were expected to keep these laws even before they settled in what would become the country of Israel, for these laws were given while they were still in the wilderness. Traveling abroad did not release any Israelite from the requirements of keeping God's laws.

Even רע (rea), from which the word 'neighbor' is translated in Leviticus 19:18, includes other people in the generic sense:

Jesus restored the true meaning of "love your neighbor as yourself" in his answer to the lawyer in Luke 10, for it had always included showing love to all fellow humans.

"Love your neighbour" has one meaning in the Old Testament and a subtly different meaning in the New Testament, where we acknowledge it to have a more universal meaning. However, this question is about its use in the OT.

In Leviticus 19:18, the word 'neighbour' refers to fellow-Israelites and was understood that way by the earliest rabbinic interpretations. Simon Carey Holt (God Next Door) says:

the neighbour was understood to be the person in front of the reader's nose, the fellow Israelite. According to the very earliest rabbinic interpretations, the neighbour in Leviticus 19:18 applies to those within the covenant community.

In a similar vein, Peter T. Vogt (Interpreting the Pentateuch: An Exegetical Handbook, page 43) says 19:18 should be read in context with verse 19:

Verse 18 says, "Do not seek revenge or bear a grudge against anyone among your people, but love your neighbour as yourself. I am the Lord" (TNIV). There is general agreement that this would be a moral law, not limited in scope to ancient Israel, and therefore that it is applicable to the Christian. The very next verse, however, says, "Do not mate different kinds of animals. Do not plant your field with two kinds of seed. Do not wear clothing woven of two kinds of material" (TNIV). These regulations are usually understood as being ceremonial law, given to the Israelites to differentiate them from the nations around them. As ceremonial law, it is not seen as obligatory for the Christian. But there is nothing in the text to suggest that the author thought the one law was universal and the other of temporary applicability for the people of God. Indeed the two verses are joinedtogether rhetorically, as verse 18 ends with God emphatically noting, "I am Yahweh," while verse 19 continues the exhortation to "keep my decrees." The argument here is that the people are to love each other because they are the people of Yahweh, the creator of all people in his image. Moreover, they were to obey his commands for the same reason. It is an arbitary distinction to say that verse 18 applies universally while verse 19 does not, since the basis for obedience according to the text is the same. (my emphasis)

Richard Elliott Friedman is a respected Jewish scholar who sincerely believes that the reference in Leviticus is to all people, not just the Israelites, but we all carry hidden biases. He recognises that Leviticus 19:18a, which clearly sets out what not to do against other Israelites makes a compelling argument that Leviticus 19:18b should be seen as a restatement in converse - what to do for other Israelites - but dismisses it by saying that chapter 19 is merely a mixture of random laws. Sarah Whittle (Covenant Renewal and the Consecration of the Gentiles in Romans, page 113) disagrees. She says "the observation that Leviticus 19 presents itself as a form of the Decalogue goes back to Leviticus Rabbah." The laws in Leviticus 19 are not at all random and there are good grounds not only for reading verse 18 as a unity, but also to read verses 18 and 19 as a unit.

As Brian mentioned, this is the very question Jesus was asked in Luke 10:25-37. While this site may not be exclusively Christian, Jesus, a Jewish man himself makes a clear illustration and argument as to why this edict applies to all persons and not merely Israelite regardless of whether he was the Messiah or not. In response to the legal expert's question, Jesus intentionally selects the most despised group in the land and seeks to make them the hero of the parable.

The original impact of the parable of the good Samaritan is generally lost today. After centuries of good biblical public relations, our understanding of a Samaritan as a positive figure is almost a cultural given. But in the original setting, to a Jewish scribe a Samaritan would have been the exact opposite, a notorious “bad guy” and traitor (see discussion on 9:51–56 above). That is an important emotive element to remember as we proceed through this parable. The hero is a bad guy. Culturally he is the last person we would expect to be hailed as an exemplary neighbor.

In fact, the parable turns the whole question around. The lawyer asks who his neighbor is in the hope that some people are not. Jesus replies, “Just be a neighbor whenever you are needed, and realize that neighbors can come from surprising places.”

The story builds on a common situation, a seventeen-mile journey on the Jericho-to-Jerusalem road. This rocky thoroughfare was lined with caves that made good hideouts for robbers and bandits. The road was notoriously dangerous, the ancient equivalent to the inner city late at night. Josephus notes how some took weapons to protect themselves as they traveled this road and others like it. (Jewish Wars 2.8.4 §125).

In fact, the Samaritans were so hated that when Jewish travelers would journey from the Nazareth area of the Galilee region to Jerusalem (in Judea), many Pharisees would take the longer, more circuitous route through Perea 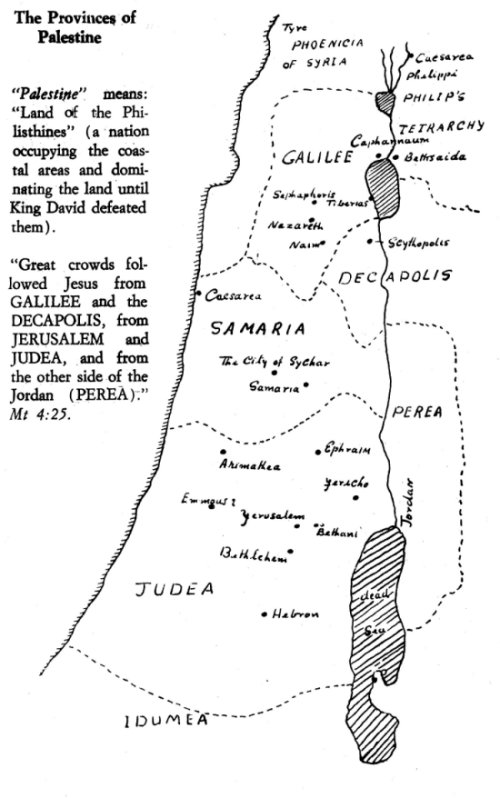 This would add approximately 30 miles to the journey. In fact, in order to take this route, a Pharisee would have to travel the very road on which the story takes place. (It is also interesting then that Jesus just completed this journey and had an altercation with the Samaritans noted in Luke 9:51-55. Jesus was also leaving from Bethsaida [Luke 9:10] which is located on the northwestern most tip of Galilee. This means that it really wasn't any shorter [or longer] to travel through Samaria when departing from Bethsaida.)

Historically, the enmity between the Samaritans and the Jews arose during the Assyrian invasion (721 BC) of the Israelite capital Samaria when some Jews surrendered and were thus not taken into captivity and exiled. During the exile and captivity of the Israelites, the Samaritans began building a new temple on Mount Gerizim in the 5th century BC as the temple and the kingdom of Judea in Jerusalem was inaccessible to the Samaritans at the time, being under the control of King Hezekiah before later falling under Assyrian control (703 BC) (though Judea was later restored at the decline of the Assyrian empire [640 BC]) and then subsequently under Egyptian occupation (609 BC) and Babylonian control (601 BC).

This was wildly offensive to the Jews as God had commanded the temple be built in Jerusalem. Therefore, the Levites had a special tension with the Samaritans as their temple was an affront not just to their religion, but to their livelihoods as well.

As you can see, Jesus' logic makes it clear that Leviticus 19:34 referred not just to individuals, but to neighboring nations as well. So clear and obvious was Jesus analysis of the text that the legal expert was forced to conclude that Samaritans were included as neighbors when Jesus asked him "Which of these three do you think was a neighbor to the man who fell into the hands of robbers?". One can see how distasteful that is to the legal expert who can only bring himself to say "The one who had mercy on him" instead of referring to him as the "Samaritan".

And this is in addition to all of the evidence when we limit ourselves to merely the Old Testament texts as Friedman did - the frequent concern for aliens, the freeing of slaves and even some of those cases unnoticed by Friedman such as the story of Ruth in which an Alien is the heroine of the story and Boaz is celebrated for his compassion on Ruth.

Clearly, both the Old and New testaments want us to conclude that neighbor is corporate and refers not just to those of the same race as Israel, but the neighboring nations as well.

Why does it matter what the bible says. We don't kill anyone for working on the sabbath any longer, or stone or crucify anyone regardless of their crimes. Morals haven't originated from these texts..... they have evolved alongside humans to benefit their well being!

We don't have to 'love' our fellow humans, but rather treat them with respect. No gods or books are needed to comprehend this. If you wouldn't want something done unto yourself, why would you follow through with the same action onto someone else!!!! Golden rule!!!!

Not the answer you're looking for? Browse other questions tagged hebrew referent-identification leviticus or ask your own question.

17
What is the significance of both the priest and the Levite in the Good Samaritan parable?
1
What position in society did the teachers of the law hold?

0
Does "a woman" in Leviticus 18:19 and 20:18 refer to all women including a man's wife or just women who were not his wife
2
Is the Sermon on the Mount based on Leviticus?
2
Meaning of כָּמ֑וֹךָ in Hebrew / ὡς in Greek ("love thy neighbor *as* thyself")