And the LORD God commanded the man, saying, “Of every tree of the garden you are free to eat;

It seems that וַיְצַו֙ should be translated as "gave charge over" as in Adam was given responsibility to choose whatever he wanted to do. According to NAS Exhaustive Concordance, צָוָה means:

Definition: to lay charge (upon), give charge (to), command, order

This would mean the charge to "not eat of" was actually a warning rather than a commandment.

"And Jehovah God layeth a charge on the man, saying, 'Of every tree of the garden eating thou dost eat;"

And the NLT goes even further to say:

But the LORD God warned him, "You may freely eat the fruit of every tree in the garden--

According to Merriam-Webster's dictionary, the verb charge means:

This would mean Genesis 3:17 says:

And to Adam He said, Because you have listened to the voice of your wife and have eaten from the tree concerning which I put you in charge of, saying, eat not from, cursed is the ground for your sake (benefit)

And He said, Who said to you that naked you [are]? From the tree, concerning which I gave to you charge/responsibility that you should not eat, have you thereof eaten?

There are several instances where צָוָה cannot possibly mean "command" because no command is given. In Deuteronomy, the exact same form is used:

"And he gave Joshua the son of Nun a charge (responsibility), and said, Be strong and of a good courage: for thou shalt bring the children of Israel into the land which I sware unto them: and I will be with thee." Deuteronomy 31:23

The root צוה appears 221See comments below times in the OT in 109 different chapters. Roughly 70 percent are in the Pentateuch. The root appears in several different grammatical constructs, in both noun and verb forms and as part of idioms.

In all instances the meaning of the word is the same, "command" (as a noun or verb) or "commandment". The sense of the meaning in all cases is imperative.

In Genesis 2:16, ויצו is the Biblical "future past" tense (עתיד מהופך) used as transitive verb, with the preposition "on" (על) before the object "the man" (האדם).

The use of "appointed" or "charged" is justifiable as a translation in contexts where a Hebrew idiom uses the language of "command [someone] on [something]" (צו..על) or "[someone] is commanded on [something]" sounds odd to the English ear, or could confuse, as in Nehemiah 7:2, and 2 Samuel 6:21. These are probably the best choices for the English translation in these cases but they lose the clear sense of "command" that you get from the Hebrew.

In Genesis 2:16, the language is "commanded on the man saying...", followed by the content of the command, not "commanded the man on the garden", so the meaning is clear, God is giving an order, not making an appointment. The intended meaning becomes even more clear in the continuation, when the man transgresses.

It is a mistake to use the interpretive license that translators need to take when giving slightly different translations of a given word for a particular idiom, in order to re-read those different translations back into another, different, context. For example, in Numbers 27:19-23, the http://biblehub.com translation of יִשְׁמְע֔וּ, "they will listen to" (in the sense of "listen to and take to heart") in verse 20 is translated as "be obedient". That's a excellent, economic, figurative translation, but far from the literal sense. You can't then use "obedient" in other places where you find ישמעו unless the idiom is the same.

Well, of course, it's possible. After all, in the words of Francis Bacon, "A man prefers to believe what he prefers to be true"

If a person were to believe that "Adam did not break a commandment from God", then it would plainly be his/her preferred position, and we would be witness to him/her expending effort in gathering evidence and opinion to support it.

Here's the thing, though: a charge, or a commandment, or a warning, or an instruction to do, or not to do something, is merely an expression of a sovereign's pleasure. Parents are sovereign over their young children, teachers over pupils, employers over employees, governments over citizens, God over man, to name but a few examples of such sovereigns.

The very first use of the word sin in the KJV (Strong's H2403), occurs in a conversation between God and Cain. Here is my rendering of it: 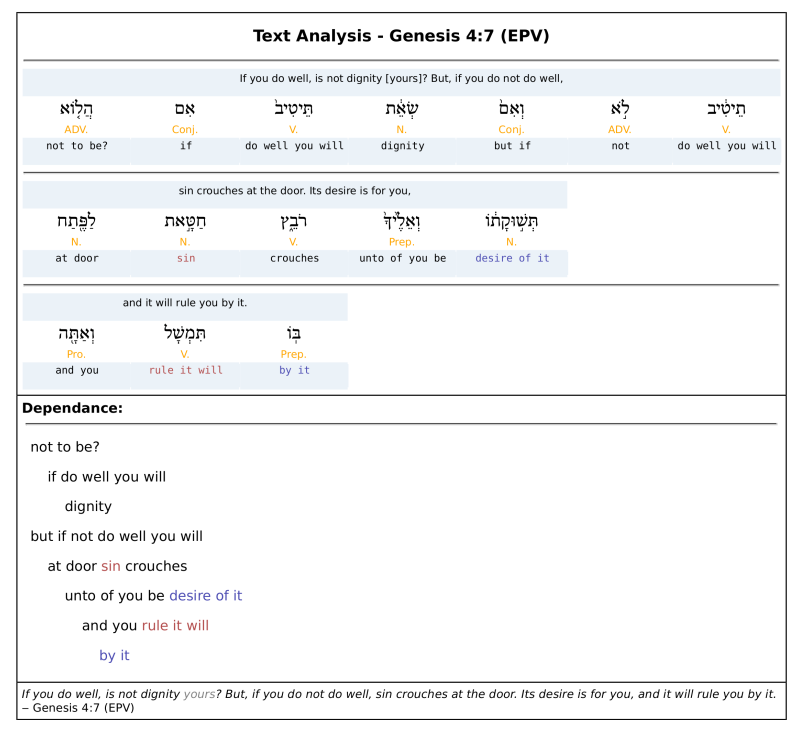 "if you do not do well, sin crouches at the door. Its desire is for you, and it will rule you by it."

So, what is sin's desire? The answer is as clear as crystal: that you pursue your own pleasure, contrary to the sovereign's.

This brought Cain undone, and before him, Eve and Adam.

Adam sinned when he decided to act in accord with his own pleasure, contrary to God's, regardless of how God's pleasure was expressed.

So, choose any English word you like for צָוָה, it does nothing to diminish Adam's culpability.

Not the answer you're looking for? Browse other questions tagged hebrew genesis translation-methodology or ask your own question.

13
Could the “tree of knowledge of good and evil” mean “tree of intelligence”?
2
Why does the ESV use “surely” in Genesis 2:16 when all others say “freely”?
0
Why did God ask Adam where they were & what they had done since he already knew what had transpired in the garden?
3
Should Genesis 2:16 say “you shall surely eat”?
8
In Genesis 3:2 did Eve receive the command not to eat from the tree of knowledge of good & evil directly from God or through Adam?
4
What did the serpent really ask in Genesis 3:1?
1
Genesis - Eden: Was There Punishment for Disobeying the Lord God? If so, What Was It?
2
Was it the first time that Eve saw the tree of good and evil in Genesis 3:7
4
In sorrow Adam shall eat..?