Is “tor-im” translated to “turtles” in KJV correct? Turtles was not used that way in 1600

And if he be not able to bring a lamb, then he shall bring for his trespass, which he hath committed, two turtledoves, or two young pigeons, unto the LORD; one for a sin offering, and the other for a burnt offering.

And if she be not able to bring a lamb, then she shall bring two turtles, or two young pigeons; the one for the burnt offering, and the other for a sin offering: and the priest shall make an atonement for her, and she shall be clean.

Entry 2 for "Turtle" via Dictionary.com:

"turtledove," Old English turtle, dissimilation of Latin turtur "turtledove," a reduplicated form imitative of the bird's call. Graceful, harmonious and affectionate to its mate, hence a term of endearment in Middle English. Turtledove is attested from c.1300.

From the Morrish Bible Dictionary:

Where the word 'turtle' occurs in the A.V. [KJV] the 'turtle-dove' is always to be understood.

Turtle, Turtle-Dove
The Latin name of this bird, Turtur, Is derived from its note, and is a repetition of the Hebrew name Tor.

Turtle, Turtle-Dove
Turtur auritus (Heb. tor). The name is phonetic, evidently derived from the plaintive cooing of the bird.

So yes, "turtle" was used for the bird also known as a "turtledove" in the 1600s. The two words were used interchangeably at the time for the same bird. This was the case even before the King James Version, as can be seen in the examples below (note that several of the older Bible versions have chapter but no verse numbers). 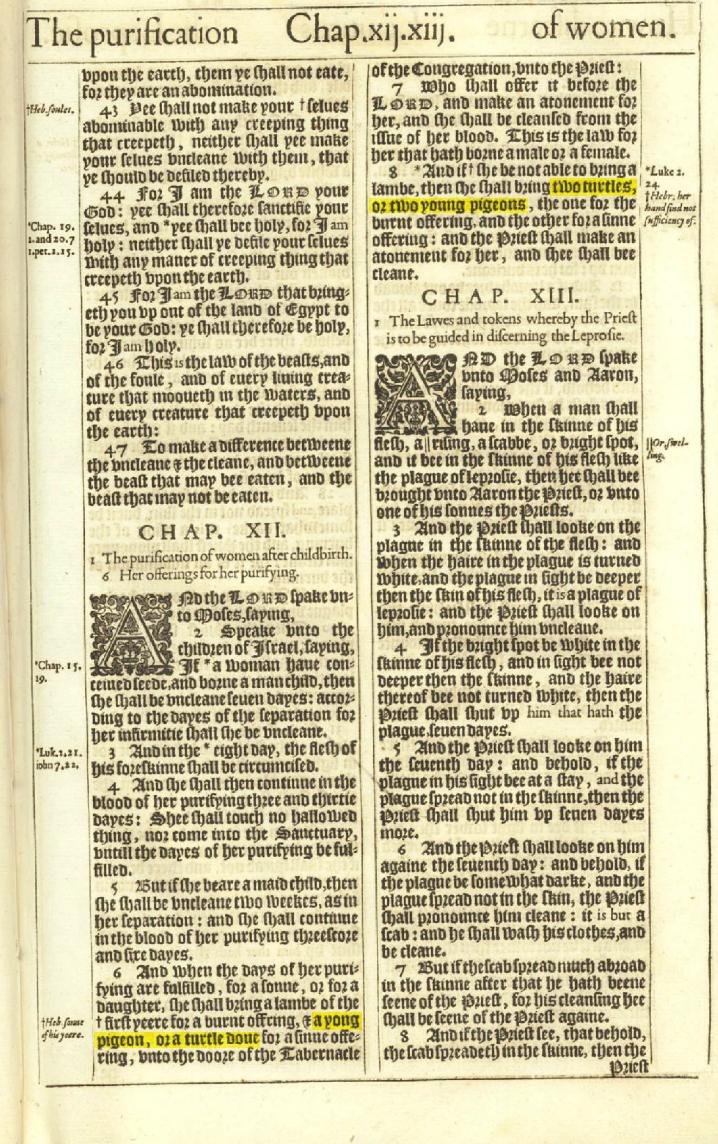 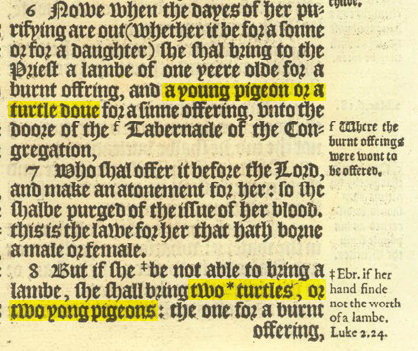 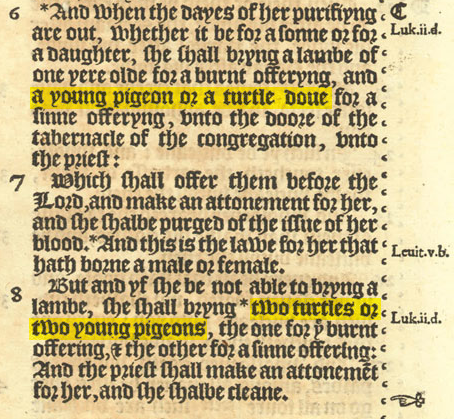 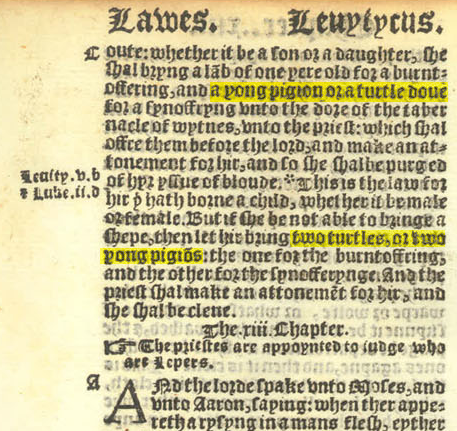 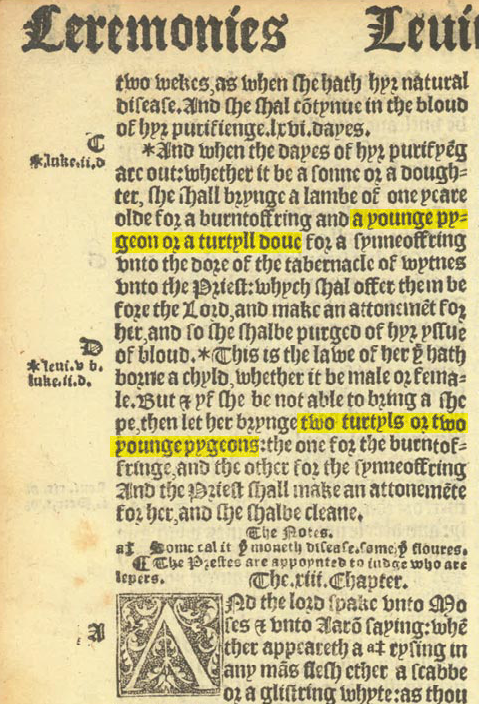 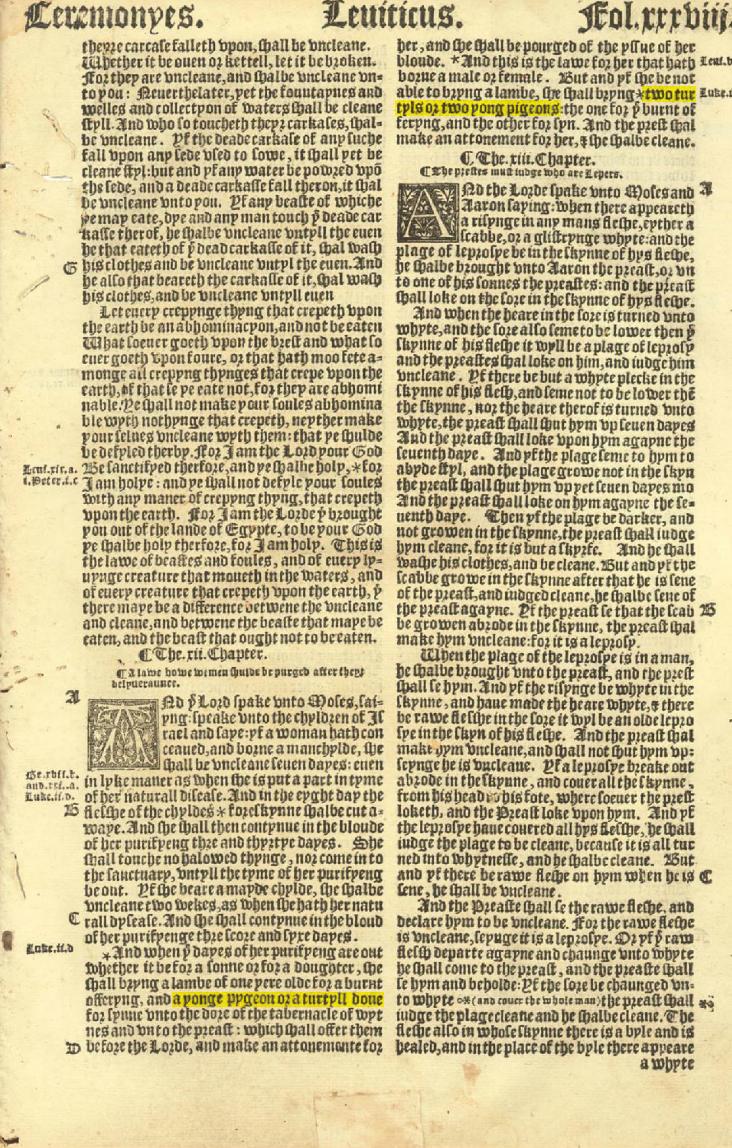 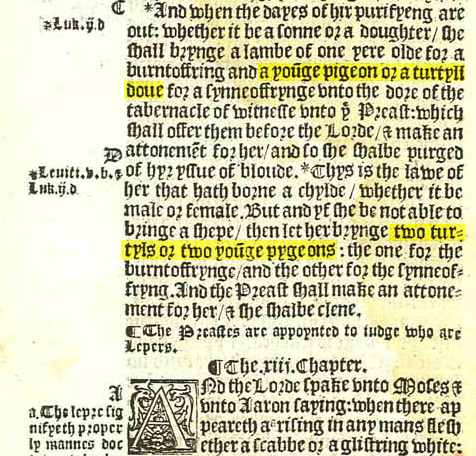 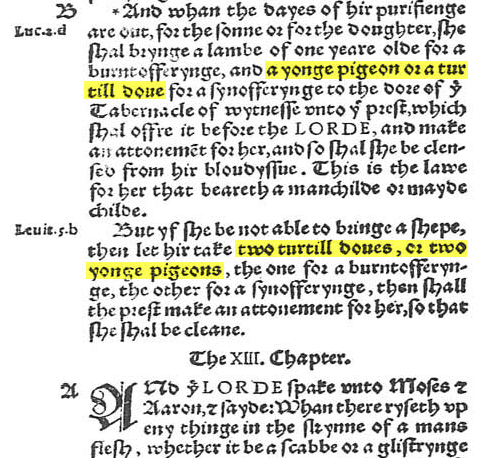 Notice that the Coverdale Bible does use "turtill doue" (turtle dove) in what would later be verse 6 and verse 8, whereas all the later versions just use turtle in verse 8. The two terms were used interchangeably.

Additionally, according to Dictionary.com and Merriam-Webster, "turtle" as in "tortoise" was not really used until shortly after the King James Version was published.

Word origin of "turtle" as in "tortoise" via Dictionary.com:

Expanded word origin of "turtle" as in "tortoise" via Dictionary.com:

reptile, c.1600, "marine tortoise," from French tortue "turtle, tortoise," of unknown origin. The English word is perhaps a sailors' mauling of the French one, influenced by the similar sounding turtle (n.2). Later extended to land tortoises; sea-turtle is attested from 1610s.

Word origin of "turtle" as in "tortoise" via Merriam-Webster:

modification of French tortue, from Late Latin (bestia) tartarucha, feminine of tartaruchus of Tartarus, from Greek tartarouchos, from Tartaros Tartarus; from Mithraic and early Christian association of the turtle with infernal forces

Not the answer you're looking for? Browse other questions tagged translation-philosophy leviticus kjv sacrifice or ask your own question.

26
Is Leviticus 12 saying that giving birth to a child is a sin?
14
Why would Mary and Joseph offer “turtle doves” in Luke 2:24?
4
How can we harmonize Leviticus 23:18 & Numbers 28:27?
4
How did they manage to sacrifice all the animals in a day in Leviticus 23:18?
2
What could be the difference in the “sin offerings” in Leviticus 4?
5
Why was Abraham required to bring three year old offerings/sacrifices in Genesis 15:7?
4
Should the bondwoman be scourged?
2
Leviticus & Numbers offerings as holistic and comparing to a typical Western world's meal