Is a euphemism the correct understanding of the word יָד in Isa 57:8?

The Verse in Context

7 “On a lofty and high mountain you have set your bed; even there you went up to offer sacrifice. 8 Also behind the doors and their posts you have set up your remembrance; for you have uncovered yourself to those other than Me, and have gone up to them; you have enlarged your bed and made a covenant with them; you have loved their bed, where you saw their nudity (יָד; yad). 9 You went to the king with ointment, and increased your perfumes; you sent your messengers far off, and even descended to Sheol. 10 You are wearied in the length of your way; yet you did not say, ‘There is no hope.’ You have found the life of your hand; therefore you were not grieved.

The Hebrew of v.8 specifically is (BHS):

That is a good enough sampling to set up the context for the issue and the question itself.

The HALOT entry, noted in the NET notes, actually reads a bit differently still than how NET translated it:

If such a direct euphemism by that particular word is intended as a reference to a sexual body part, then it is the only place in the Hebrew text in which the word is so used, as BDB's entry (4.g) states:

Is 57:8 according to Hi De Che Or Brd Du and most = a phallus thou beholdest; this favoured by context but without support in Heb. usage; Di a (beckoning) hand.

This unique usage, for me, is a bit of an issue, especially when other solutions are proposed that could fit the context:

I believe there could be a case for another in context idea as well...

As I noted, the context is clearly a sexual one. BDB noted that context is the primary reason the euphemization proposal finds any favor.

But the final word ("seen"/"looked") is also found at other points to refer to other types of "perception" than seeing, essentially figuratively meaning "experience" (HALOT) or more generally "perceive" (BDB). Examples are most abundant in Job—15:17 (what Eliphaz had experienced, he will tell), 27:12 (experienced the hand of God, v.11), 34:32 (be taught those things that have not been experienced), 36:25 (experienced God's work which is sung about [v.24] from afar). But BDB notes as an example a verse earlier in Isaiah as well, 48:6 (the idea being "perceive all this").

So another in context rendering may be "a hand you have perceived," which could still be a euphemism for sexual acts, as the hand is often involved in intimate sexual encounters. The idea of a hand being perceived in areas where the hand ought not be if a woman were being faithful to her spouse can evoke just as much an image of unfaithfulness in this context.

Such an interpretation takes the words more literally, but still applies a meaning to them that fits the context.

My goal here is not to argue for the potential interpretation I gave above, nor necessarily for that of Gesenius or Dillmann. Rather, the questions are:

The word “hand” in Is 57:8 appears to be euphemistic reference for the aroused anatomy of the male phallus. (The double-entendre also appears evident in Song of Solomon 5:4 and Song of Solomon 5:14.) Since the dual use of the word “hand” in the context of love is very explicit in Ugaritic texts, the same double-entendre for “hand” is presumptive for Biblical Hebrew when the context involves sexual activity.

In 1928, archeologists began analyzing cuneiform texts discovered in what was the Canaanite seaport of Ugarit, which is modern day Ras Shamra in northern Syria. The tablets date to as early as the 14th Century BC(E). Like Biblical Hebrew, the poetry and narrative of these clay tablets appears in dichotomy or parallel form. Since Biblical Hebrew also follows a similar structure (discussed below), the parallels provide insights as to the meanings of words both in and between Ugaritic texts and Biblical Hebrew. Smith and Parker (1997) make the following observations in this regard. 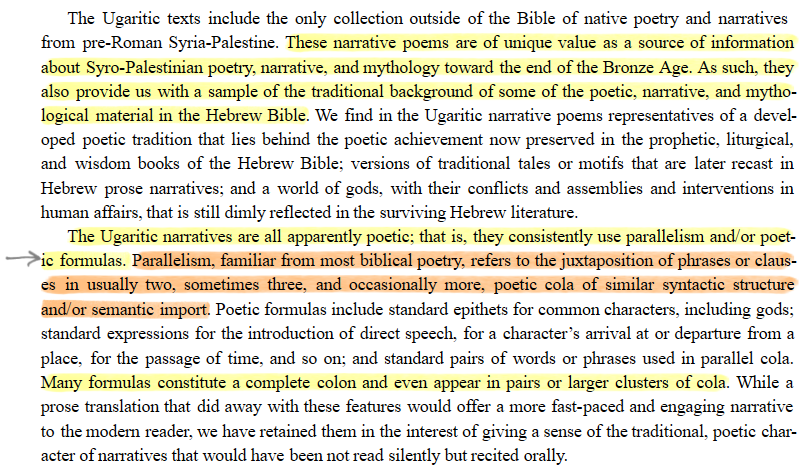 An excellent example is the verse below, where the word for love, אָהַב (ä·hav'), and the word for hand, יָד (yäd), appear in parallel. Each word begins the line or colon, which appear parallel through the lens of the assigned structure of cantillation.

Now, in their analyses of the clay tablets found at Ras Shamra, Smith and Parker (1997) discovered an exact match of the respective words (in parallel) for “hand” / “love” on the 38th and 39th line of the fourth tablet narrative concerning Baal. 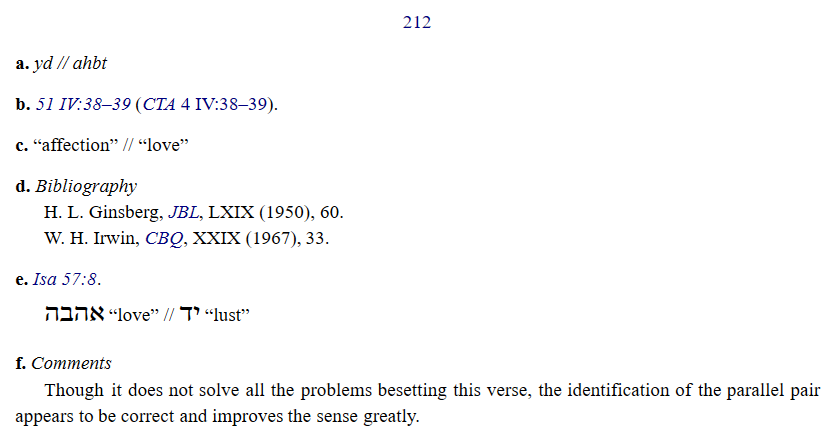 The “hand” is the double-entendre for the aroused male phallus, as other examples in Ugaritic texts make explicit. Fisher, Knutson, and Morgan (1972) also indicate that explicit sexual innuendo is implied by the use of the word “hand” in these Ugaritic texts. 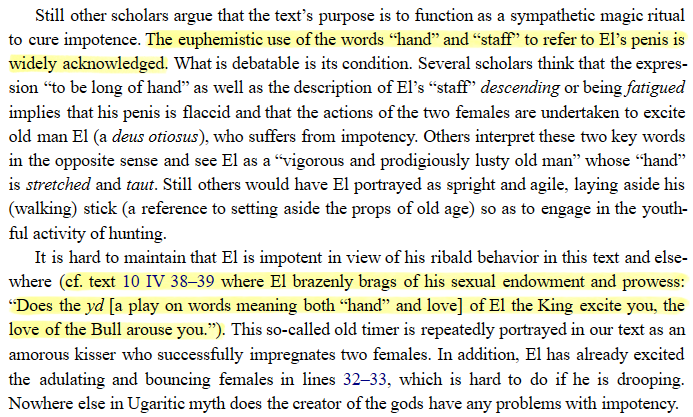 This parallel therefore appears to be consistent with the bicolon (parallel) from the passage in Isaiah 57:8, since there is the presumptive parallel with the Ugaratic Text based on the 38th and 39th line of the fourth tablet narrative concerning Baal. If this parallel is accurate, then the Hebrew word for “hand” may include the imagery of the aroused male phallus in at least two other passages of the Hebrew Bible, where the hand appears in the context of love between a man and a woman.

Song of Solomon 5:4 (NASB)
4 My beloved extended his hand through the opening, And my feelings were aroused for him.

Ogden and Zogbo (1998) provide the following commentary concerning this passage, and their assumption is that “any Israelite” would understand the double-entendre. 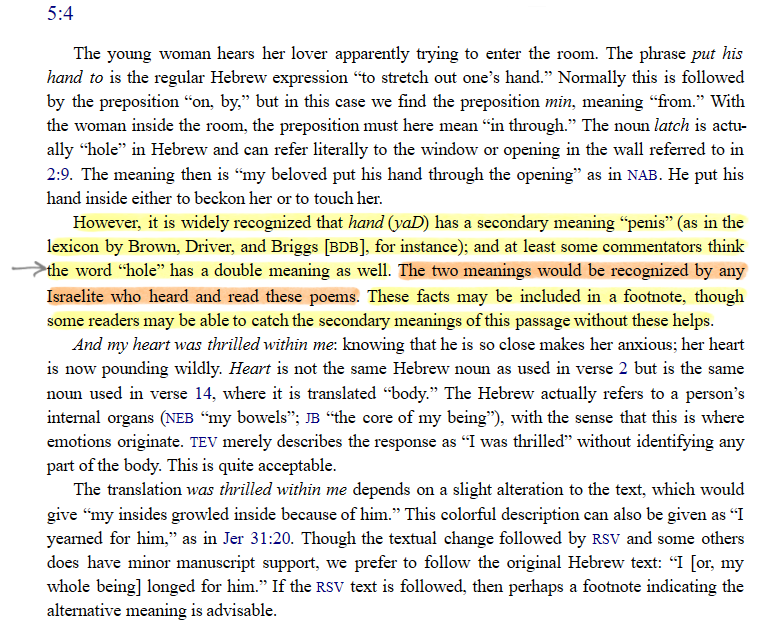 Song of Solomon 5:14 (NASB)
14 His hands are rods of gold
Set with beryl;
His is carved ivory
Inlaid with sapphires.

Ogden and Zogbo (1998) provide the following commentary on this verse again with the mention that ancient readers would have understood the double-entendre of hand(s) in allusion to the male phallus. 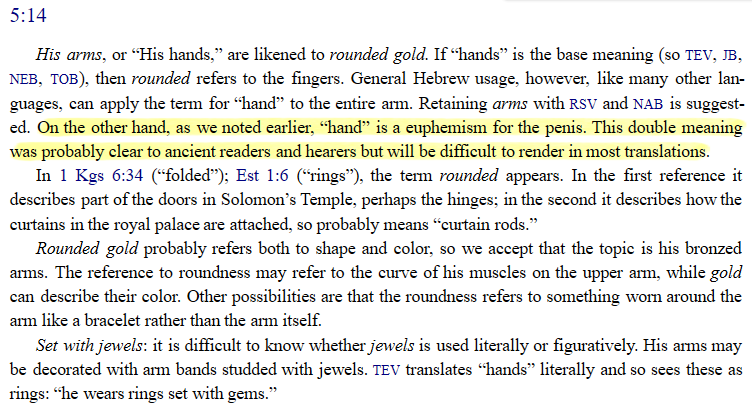 Jewish sources for this passage (Talmud, Targum, and Midrash) make no connection between the hand and phallus in these passages, and so this correlation is non-existent from the standpoint of Jewish oral tradition. However, when considering that the context of Isaiah 57:8 was the spiritual and sexual promiscuity of Israel in connection with foreign nations, the reliance on the Ugaritic texts for the interpretation of this passage may be very relevant.

Not the answer you're looking for? Browse other questions tagged isaiah figure-of-speech terminology or ask your own question.