What is the accurate English translation of Judges 8:18 (Codex Alexandrinus)?

What is the English translation that is as accurate as possible and as literal as possible of Judges 8:18 (Codex Alexandrinus) ?

I can't see an English translation of it. NRSV, RSV and DRA that use the LXX use a different MSS.

The textual situation of LXX Judges is somewhat unusual (although not wholly unique). As Philip E. Satterthwaite explains it in his introduction to the NETS edition of Judges,

In Judges Rahlfs based his edition on the readings of about twenty manuscripts. He identified two main textual traditions, which he believed were so diverse that they amounted to separate recensions (editions) of the book. He printed these as separate texts, designated A and B. NETS Judges, accordingly, offers a translation of both the A and the B texts.

Rahlfs based his A text upon Codex Alexandrinus (A) and two groups of manuscripts representing the recensions of the LXX associated, respectively, with Origen (c. 185–253 CE) and Lucian (c. 250–312 CE). His B text was based upon Codex Vaticanus (B).

Satterthwaite offers much more comment on this textual situation in the remainder of that introduction.

For 8:18, the A and B texts are not all that different, and those differences are confined to the second half of the verse (I've placed in italics, below). These are Satterthwaite's translations:

A: καὶ εἶπεν πρὸς Ζεβεε καὶ Σαλμανα ποῦ οἱ ἄνδρες οὓς ἀπεκτείνατε ἐν Θαβωρ καὶ εἶπαν ὡσεὶ σύ ὅμοιος σοί ὅμοιος αὐτῶν ὡς εἶδος μορφὴ υἱῶν βασιλέων
= And he said to Zebee and Salmana, “Where are the men whom you killed at Thabor?” And they said, “As you are: one like you was like them, like the appearance, the form, of kings’ sons.”

B: καὶ εἶπεν πρὸς Ζεβεε καὶ Σελμανα ποῦ οἱ ἄνδρες οὓς ἀπεκτείνατε ἐν Θαβωρ καὶ εἶπαν ὡς σύ ὣς αὐτοὶ εἰς ὁμοίωμα υἱοῦ βασιλέως
= And he said to Zebee and Selmana, “Where are the men whom you killed at Thabor?” And they said, “As you are, so were they, for a likeness of a king’s son.”

For the banter, this is what the "A" and "B" texts look like set out in Rahlfs' Septuaginta; note 'A' and 'B' designations in inside margin: 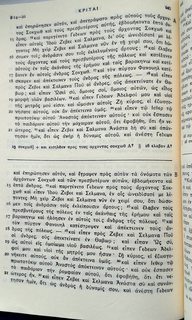 Not the answer you're looking for? Browse other questions tagged greek septuagint judges manuscript or ask your own question.