Why were the waters divided in Gen 1:6?

Like many Ancient Near Eastern mythologies, the creation story in Genesis 1 does not begin with nothing but with the dark, formless, watery ‘deep’, in Hebrew known by the proper noun Tehom (H8415). In Hebrew cosmology Tehom was the primordial cosmic ocean that filled the entire universe. After creating light on the first day (v.3-5), Elohim is said to have pushed back or split the waters to create a space within Tehom:

The ‘dividing’ or ‘separating’ of the waters, therefore, created what we’d call an atmosphere within the chaos of the watery universe. On succeeding days God gathered the lower waters and caused dry land to appear and burst with vegetation (v.9-13), and he created lights in the dome of the sky (v.14-19), sea life and birds (v.20-23), and creatures on the land (v.24-31). But life was predicated on keeping chaos at bay, keeping the upper and lower waters – which were always threatening to break through – in their place. God accomplished this by means of the rakia or firmament, the hard, hammered-out dome of the sky (see image below).

Of course the parallels between this text and other ANE creation myths are striking and often noted by critical scholars, including the philological connection between the Hebrew Tohem and Babylonian Tiamat, the serpent goddess of the ocean whose rib-cage Marduk used to fashion the vault of the sky in their creation epic, the Enûma Elish.

Whatever the inspiration or (demythologizing?) theological intent of the biblical authors, it is sufficient to this question only to describe the need for the ‘dividing’ of the waters and the importance of the firmament God called into existence on the second day. And it was so. 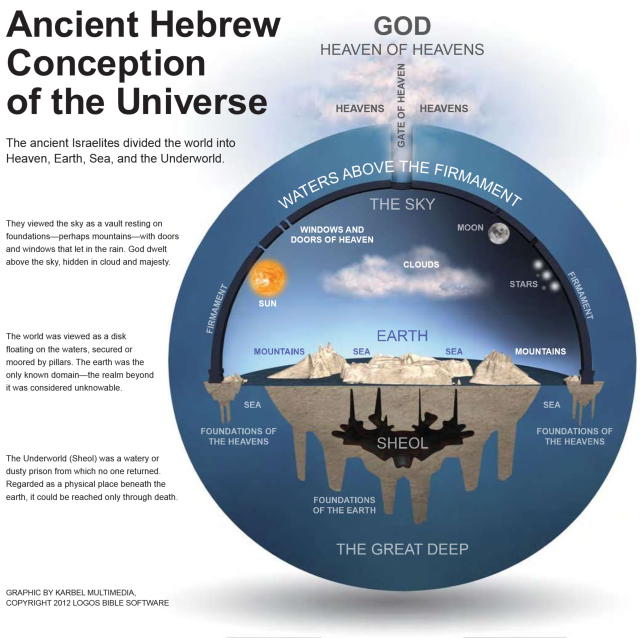 We see that After God made the Firmament/dome/expanse/sky? There was space between both waters. Which is the waters Above it and the Waters Below it.

As to how and where the Waters were gathered see Psalm 103 Lxx2012 (104 in other Versions) From verses 6 The deep, as it were a garment, is his covering: the waters shall stand + on the hills.

7 At your rebuke they shall flee; at the voice of your thunder they shall be alarmed.

8 They go up to the mountains, and down to the plains, to the place which you have founded for them.

However There is a contention .

looking at the hebrew of that Passage,

Does the phrasing mean that the Valleys are the place that was founded for the gathering of the waters? Is a question for another day.

So now the Dry Land had Appeared, this means that the Expanse between the waters made place for the dry land to appear

Then God proceeded to making The lights and the stars for season and times and for days and years. To see the connection, when God placed them in the Sky he noted that The should give Light to the Earth (dry Land) which had now Appeared.

Thus the expanse was the place that God intended to set the lights for the Earth.

The Separating of the Waters was For the Earth and it's Heaven.

The editors of the Oxford Jewish Study Bible note that the Hebrew word often translated as "firmament" (which they translate as "expanse") refers to a piece of metal that has been hammered flat. The Tanakh reading of this verse is:

God said, “Let there be an expanse in the midst of the water, that it may separate water from water.”

Church Father Basil the Great commented on this firmament/expanse in the Hexaemeron in the 4th century. Expanding on his commentary, the 20th century Eastern Orthodox monk Seraphim Rose wrote:

St. Basil believes that the function of the "firmament" was to preserve a mild temperature over the whole earth. Now it so happens that we know of a certain "greenhouse" effect on the earth in prehistoric times: tropical plants and animals have been found in the ice of the far north, indicating that the northern regions were indeed once temperate. Further, in the second chapter of Genesis we are told that before the creation of man, the Lord had not caused it to rain upon the earth ... but there went up a mist from the earth, and watered the whole face of the ground (Genesis 2:5-6).

The early earth, then, seems to have been a place rather different from the one we know: a place universally temperate, plentiful in moisture which constantly watered an abundant vegetation, which, as we shall see, was all that God intended not only for the food of man, but even of the beasts (Genesis 1:30).

Monk Seraphim also relates the firmament to the flood account:

The very phenomenon of rain is not mentioned in the text of Genesis until the time of Noah; and then it is not an ordinary rain but a kind of cosmic catastrophe: All the fountains of the great deep burst forth, and the windows of the heavens were opened. And rain fell on the earth forty days and forty nights (Genesis 7:11-12). Immense - to us, nearly unimaginable - amounts of water were loosed on the earth, reducing it virtually to its state on the First Day of Creation, when the "deep" covered the earth. The rains we know today could not cause this to happen; but the text describes something even worse: an immense underground supply of water was loosed, and the "firmament" - the atmospheric condition that preserved a permanent reservoir of water in the air, evidently in the form of clouds such as the planet Venus has even now - was literally "broken" and emptied its contents upon the earth.

In the scheme of all features that make up the universe, the earth as a feature is too insignificant, and if that is the case where would the water/s come in? So if the sky was indeed the expanse that seperates the waters, since the expanse is in place for that purpose, the waters above that expanse would never be seen by man as cosmology claims that the expanse grows by day.

The deep in scriptures is the source of the waters, and it isn't physical but spirit, which means that the 'waters' that it's a source of are also 'spirit'.

Rom 10:7 Or, Who shall descend into the deep? (that is, to bring up Christ again from the dead) Blockquote

Did Christ drown at sea?

Concerning the fall of Satan;

Eze 31:15 Thus saith the Lord GOD; In the day when he went down to the grave I caused a mourning: I covered the deep for him, and I restrained the floods thereof, and the great waters were stayed: and I caused Lebanon to mourn for him, and all the trees of the field fainted for him.

Satan is spirit. Likewise, his place of incarceration must also be spirit. The deep is always depicted as a source of 'spiritual material' for God's use(eg Psalm 139:1), and the abode of all spirit prisoners.

About the devils that messiah cast out of a lunatic;

Luke 8:31 And they besought him that he would not command them to go out into the deep.

They knew it for a 'nasty' place, so they asked for any banishment but the deep. Their fear was that 'unpleasantness', the darkness that came up on face of the deep, that darkness that characterised the deep in many places it is cited. This is what was even on the face of the waters that the spirit of Elohim 'moved' upon.

The dwellers in the deep are often denoted as the 'deep'

Eze 26:19 For thus saith the Lord GOD; When I shall make thee a desolate city, like the cities that are not inhabited; when I shall bring up the deep upon thee, and great waters shall cover thee;

Bring up the deep and great waters? He means judgments on the wayward people by allowing spirits from the underworld to come up and wreck havoc among them by ways that cause damnation.

This is the deep in Gen 1:6 whose waters are 'seperated' upon changing by the 'moving' of the spirit of Elohim upon the face of them.

That these 'waters' had to be seperated indicates distinct qualities in them that called for that seperation. So in a sense they were mixed. Later, they would be seperated from each other by the mysterious 'expanse.' The expanse was to be in the 'midst' of the waters. 'Midst' here doesn't mean 'middle' as many versions render the word. It alludes to circumstances, while 'middle' refers to a position.

You are therefore to make a distinction between the clean animal and the unclean, and between the unclean bird and the clean; and you shall not make yourselves detestable by animal or by bird or by anything that creeps on the ground, which I have separated for you as unclean.

13 You shall have the Levites stand before Aaron and before his sons so as to present them as a wave offering to the LORD.
14 Thus you shall separate the Levites from among the sons of Israel, and the Levites shall be Mine.

And they shall sever out men of continual employment, passing through the land to bury with the passengers those that remain upon the face of the earth, to cleanse it: after the end of seven months shall they search.

The spirit of Elohim that had moved upon the waters had imparted to some of them natures that were distinct from each other; to create a being or impart a nature to a creature is the work of the spirit of Elohim. Ref Psalm 104:30, Genesis 1:2. This is why there was a need to 'seperate' the waters. The expanse is that which seperates the entities into different realms by means of their natures, it was a physical barrier but a 'tweek in the natures.' So the term 'ABOVE' in Gen 1:6 alludes to a higher essence as messaih refers in the two natures, one from below and the other from above in:

John 8:23 And he said unto them, Ye are from beneath; I am from above: ye are of this world; I am not of this world.