The “altar that was by the oracle” is supposed to be a reference to the altar of incense, as it was located directly in front of the veil covering the ark of the covenant.

However, in his commentary on Heb. 9:4, regarding the translation in the King James Version, Franz Delitzsch wrote, 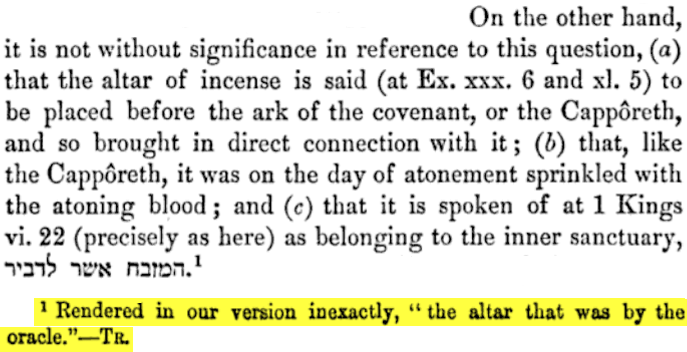 Question: What is an accurate translation of the Hebrew text הַמִּזְבֵּחַ אֲשֶׁר לַדְּבִיר?

I take it the main question is about the meaning of דְּבִיר = dəbîr in 1 Kings 6:22, and in doing so, also to account for the KJV rendering, and it's easiest to start with that.

The 16th C translators understood the word dəbîr to come from the Hebrew root d-b-r, which is related to the noun dābār ("word") and the verb dābar ("to speak"). It's fairly obvious, then, that dəbîr coould be considered to derive from this root, and thus the meaning of "oracle" (something divine and spoken) could be offered. (The Septuagint was no help here, as this phrase has no reflex in the Greek.)

By the 19th C, commentators had abandoned the notion that dəbîr had anything to do with speaking, and related it rather to an Arabic cognate, and understood it to be the "innermost" room of the Temple, often referred to as the "Holy of Holies". So C.F. Burney wrote in his Notes on the Hebrew Text of the Books of Kings (Oxford, 1903), pp. 70-71:

The word דביר ... doubtless denotes the back or innermost room of the Temple.

This is now a commonplace understanding.3 The main lexica simply give "shrine" or "holy of holies" as the English gloss for this Hebrew word. 1 Kings 6:16 seems to demand this sense, in fact, as it provides something like a definition in the way it is formulated:

[NASB] He built twenty cubits on the rear part of the house with boards of cedar from the floor to the ceiling; he built them for it on the inside as an inner sanctuary [dəbîr], even as the most holy place [qōdeš haqqŏdāšîm].

And this is, in fact, how it was understood by Rashi, and also how it is glossed in Jastrow's Dictionary of the Targumim...(etc.) (p. 277). More recently, the Hebrew and Aramaic Lexicon of the Old Testament entry associates this meaning with a suggestion that it is related to Egyptian dbr, Coptic ταβιρ [tabir], "sacred shrine". HALOT also cites evidence from ancient Syria, and possibly also Punic.

One doesn't find much discussion of this in more recent commentaries, since the matter is no longer thought worth discussing -- see, as two representative examples:

Summary: The KJV tradition did the best it could here, but it mistranslated it as "oracle". It should be understood as the "inner sanctuary", or "holy of holies", as it is now clear this is the meaning of dəbîr.

There were four pieces of furniture in the Tabernacle of Moses. The lampstand, the table of showbread, and the altar of incense which were placed in the Holy Place. The Ark of the Covenant with the Mercy Seat was in the Most Holy Place:

Here is a diagram of the Tabernacle built thorough Moses1: 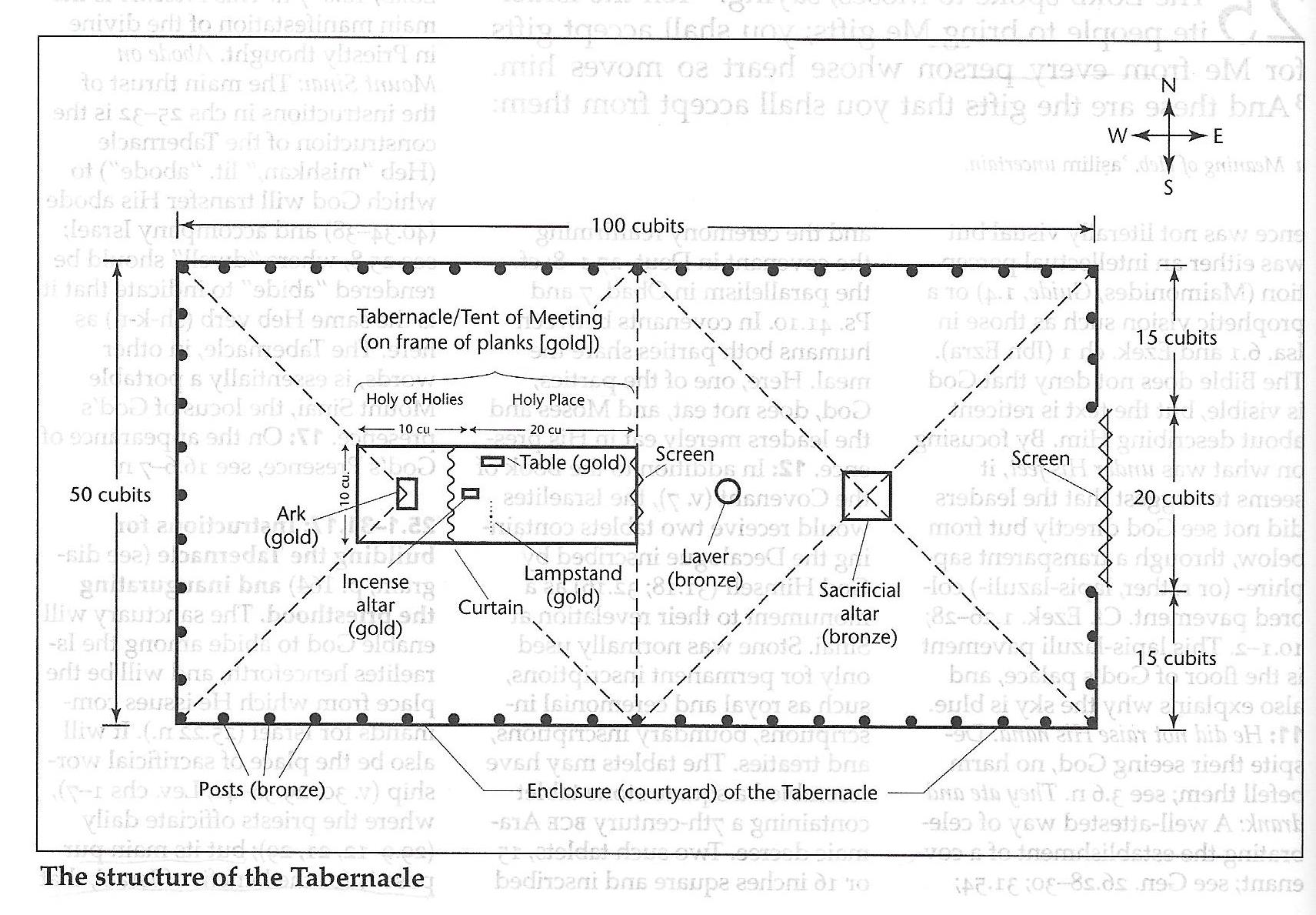 The writer of Hebrews uses the Tabernacle of Moses as the pattern for the heavenly:

Now even the first covenant had regulations for worship and an earthly place of holiness. For a tent was prepared, the first section, in which were the lampstand and the table and the bread of the Presence. It is called the Holy Place. (Hebrews 9:1-2 ESV)

They serve a copy and shadow of the heavenly things. For when Moses was about to erect the tent, he was instructed by God, saying, “See that you make everything according to the pattern that was shown you on the mountain.” (Hebrews 8:5 ESV)

The heavenly is reflected in the earthly copy built by Moses.

Besides replacing the tent with a permanent structure, there were two differences between what Solomon built and the pattern given to Moses. Solomon added two angels to The Most Holy Place:

Solomon also replaced the curtain entrance to the Holy Place with a wooden door:

Neither the Tabernacle built by Moses or Solomon were the way to the Holiest of All:

the Holy Spirit indicating this, that the way into the Holiest of All was not yet made manifest while the first tabernacle was still standing. (Hebrews 9:8 NKJV)

The way to this place was not made manifest until Jesus died.

When Jesus died, the curtain in the Temple was torn from top to bottom. This was the curtain which divided the Holy Place and Most Holy Place. So the Christian perspective from Hebrews is to see the change that replaced the first curtain with a door and door posts as a foreshadowing of the work of The Christ on the cross which is the true way to the Holiest Place:

I am the door. If anyone enters by Me, he will be saved, and will go in and out and find pasture. (John 10:9 NKJV)

by a new and living way which He consecrated for us, through the veil, that is, His flesh. (Hebrews 10:20 NKJV)

The true way to the Holiest Place is through the door which is His flesh.

When the veil is torn apart there is now a single room entered through a door; when that happens the altar would be as it is described in Hebrews.2

With this in mind we can see how the altar which in fact was not in the Most Holy Place in Solomon’s Temple could still be "before the Ark."

And he overlaid the whole house with gold, until all the house was finished. Also the whole altar that belonged to the inner sanctuary he overlaid with gold. (1 Kings 6:22 ESV)

Then the priests brought in the ark of the covenant of the Lord to its place, into the inner sanctuary of the temple, to the Most Holy Place, under the wings of the cherubim. For the cherubim spread their two wings over the place of the ark, and the cherubim overshadowed the ark and its poles. The poles extended so that the ends of the poles could be seen from the holy place, in front of the inner sanctuary; but they could not be seen from outside... (1 Kings 8:6-8 ESV)

The poles projected so that the ends of the poles were visible in the sanctuary in front of the Shrine... (1 Kings 8:8 JPS 2004)

After placing the Ark under the cherubim the poles that carried Ark were drawn out and could be seen from the Holy Place. The poles were an integral part of the Ark:

You shall put the poles into the rings on the sides of the ark, that the ark may be carried by them. The poles shall be in the rings of the ark; they shall not be taken from it. (Exodus 25:14-15 ESV)

When the poles are taken as part of the Ark, the altar was before the Ark even though it was in the Holy Place. So the phrase הַמִּזְבֵּחַ אֲשֶׁר לַדְּבִיר “the altar that was by the oracle” is correctly understood by Franz Delitzsch although not for the reason he offers.

The altar was not in the inner sanctuary nor does it belong there in either the Tabernacle of Moses or Solomon’s Temple. It was always in the Holy Place. Yet once the poles from the Ark are pulled toward the altar to push against the veil so they may be seen without entering the Most Holy Place, the Ark (properly understood as including its poles) has a closer proximity to the altar than it did in the structure built through Moses.

The Ark of the Covenant actually consisted of 4 pieces: the Ark, the Mercy, and the 2 poles. For the Christian the most important aspect of the furniture are the poles used to carry the Ark. They indicate the manner of death Christ the Lord will experience: death on a cross. The cross will be constructed using 2 poles and it is His cross which will open the way to the Holiest Place.

Therefore, pulling the poles out of or away from Ark in Solomon's Temple is symbolic of their eventual removal and the coming crucifixion of Jesus which will make manifest the way to the Holiest Place.

2. When the veil was finally torn, the Most Holy Place was empty, the Ark of the Covenant having been removed and never returned when the first Temple was destroyed.