In Song of Solomon 5:16 what is the significance of the plural suffix?

In Song of Solomon 5:16, the verse in Hebrew transliteration is:

where maḥămaddîm is translated as "[is] lovely". But normally, in Hebrew, when the suffix "im" is added to a word, it's the use of majestic plural, that is giving respect to the entity referred to by the set of characters preceding "im". Just like "Eloh-im" (giving respect to Eloah).

So "maḥămaddîm" is translated as "lovely", and the "-im" added either means a normal plural or majestic plural, In either case, what is the reason for pluralizing an adjective like "lovely"?

The plural noun in classical Hebrew can do other "non-number" jobs than simply the plural of "majesty". One common one is the "plural of abstraction", and that is the way maḥămaddîm is typically understood here. Waltke-O'Connor para. 7.4.2(a) further refine this as refering to qualities: 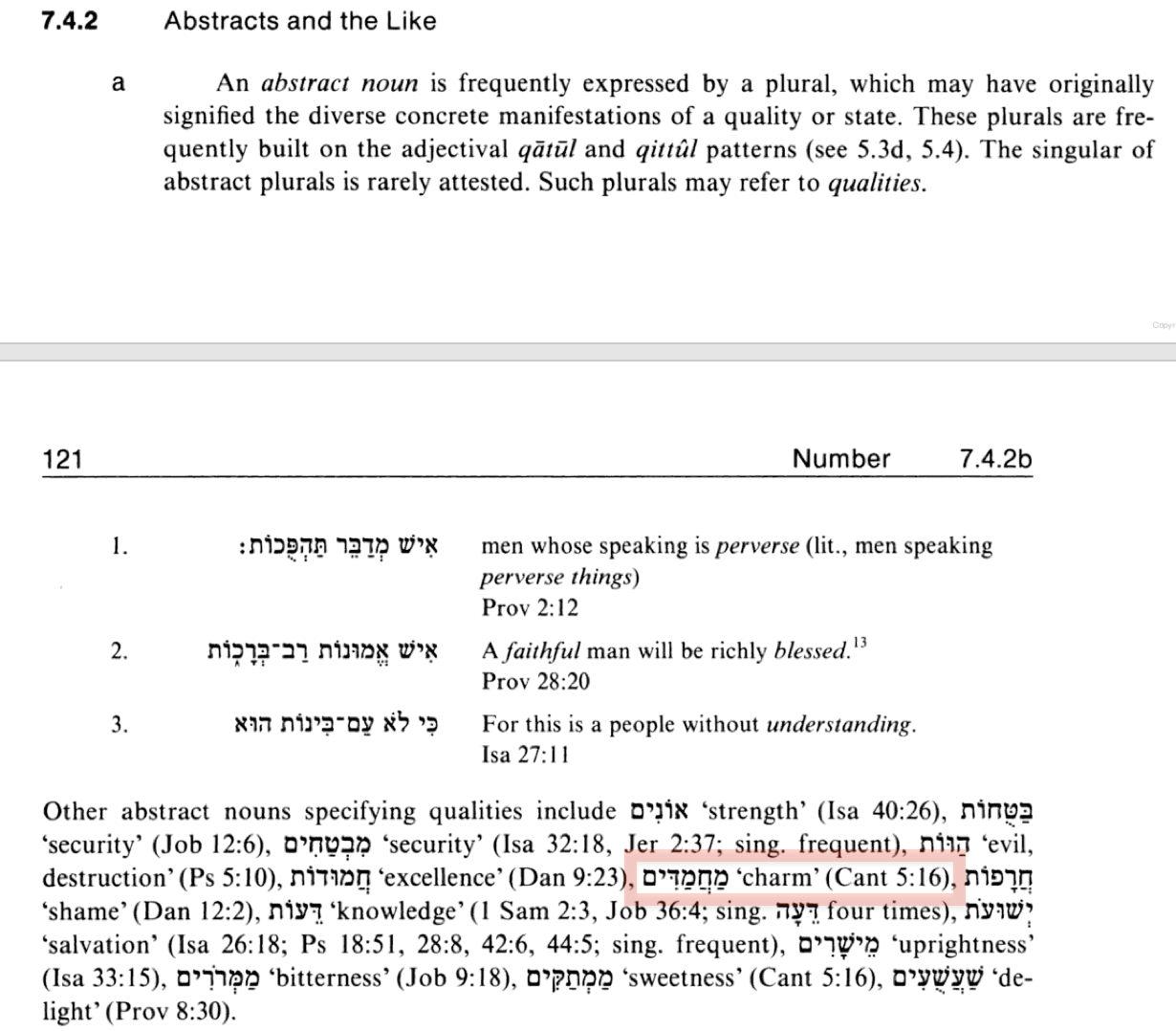 Cf. Joüon-Muraoka, who explain it precisely the same way: a "plural of abstraction" dealing with "qualities" (see para. 134n, p. 471).

The plural form (maḥămaddîm) is not literary, but is to be understood in the literal sense. That is, Jewish sages over the centuries did not understand the plural form here in any literary (or abstract) sense, but in the most literal way. In this regard, the plural suffix was in reference to sweet words (plural) that emanate from the mouth of the beloved.

For example, the Targum of the Song of Songs appeared between the 1st and 4th Century, and the provides the following translation from Hebrew into Aramaic.

Suggested translation: The words upon the palate of sweetness are like honey, and all his commands are pleasing to his wise counsellors than gold [or silver]. This is the splendor of God, my beloved, and this is the power of the strength of my Lord, my beloved, O prophets who prophesy in Jerusalem.

Rabbi Shlomo Yitzchaki (Rashi) lived in the 11th Century, and he also notes that the plural form of sweetness was the actual reference to the words in the mouth of the beloved. The following comes from the relevant cite reference on the www.chabad.org website.

[16] His palate is sweet: His words are pleasant, e.g. (Lev. 19:28): “And you shall not make a wound in your flesh for one who has died… I am the Lord,” faithful to pay reward. Is there a palate sweeter than this? Do not wound yourselves, and you will receive reward. (Ezek. 33:19): “And when a wicked man repents of his wickedness and performs justice and righteousness, he shall live because of them.” Iniquities are accounted to him as merits. Is there a palate sweeter than this? (emphasis added)

Early Jewish Halakic (legal) midrash echos of the same. The Mekhilta de-Rabbi Shimon bar Yohai, which are midrash ascribed to Rabbi Simeon bar Yochai who was one 2nd-century tannaitic sage in ancient Israel after the destruction of the Second Temple. The midrash notes the following:

The following translation comes from Nelson (2006).

The midrash here makes the explicit connection between words and the deliciousness of those words as the sound [of the words] coming from the same mouth.

In summary, rabbinic scholars over the centuries (who were intimate with Jewish oral tradition and the Jewish understanding of the Hebrew Scriptures) had understood the plural form (maḥămaddîm) as in literal reference to sweet words, and not to something abstract.

The suffix 'im' is very common in this passage and throughout Song of Songs, as there are a lot of plurals present throughout. 'im' is just the simple plural ending for all masculine nouns in Hebrew

'His mouth is most sweet' is also conjugated in the plural here, as are many other words throughout this section of Song of Solomon. In each case, the plural isn't about majesty but rather intensity - it helps the text to flow poetically and presumably strengthens the compliments.

There's nothing particularly significant in this usage of maḥămaddîm, and the usage is very similar to what we see in Isaiah 64:11, using a slightly different plural conjugation:

"Our holy and beautiful house, where our fathers praised you, has been burned by fire, and all our maḥămaddênū have become ruins."

Is the Hebrew 'Elohim' dual or plural?

People who do not speak Hebrew tend to look at it in a way too simplistic way. The Hebrew word “elohim” has multiple meanings and can be multiple OR singular depending on context

Thus to know what is meant and how it should be read, you need to know the context of the usage. S this is why linear translations of Hebrew texts fail- Hebrew is a context sensitive language and usage and grammar around a word can change its meaning and implications. (Source: Quora)

The translation describes the upcoming person with the exact name.

The use of the plural form ("-im") of the adjective for a singular noun seems to be poetic form, equivalent to our adding "-ness" to an adjective: "sweet-ness," "loveli-ness."

His mouth is sweetness, and everything about him is loveliness: this is my beloved, this is my companion, O daughters of Jerusalem.

The book of Solomon is actually showing the love relationship between Christ and the Church. So that Portions says that My friend is altogether lovely/desirable (paraphrased). Since that part is referring to Christ, It can be pluralized.

For those who argue that mahmadim means Muhammad, I think they got it wrong. Because some words in Hebrew are similar to the words in Arabic. Mahmad means desirable or lovely in both languages, which is also synonymous with Hammad or Muhammad which means Praiseworthy in Arabic.

Not the answer you're looking for? Browse other questions tagged hebrew grammar song-of-songs or ask your own question.