In John 19:25, are there three women or four women listed?

According to the Greek text, are there three or four women listed? 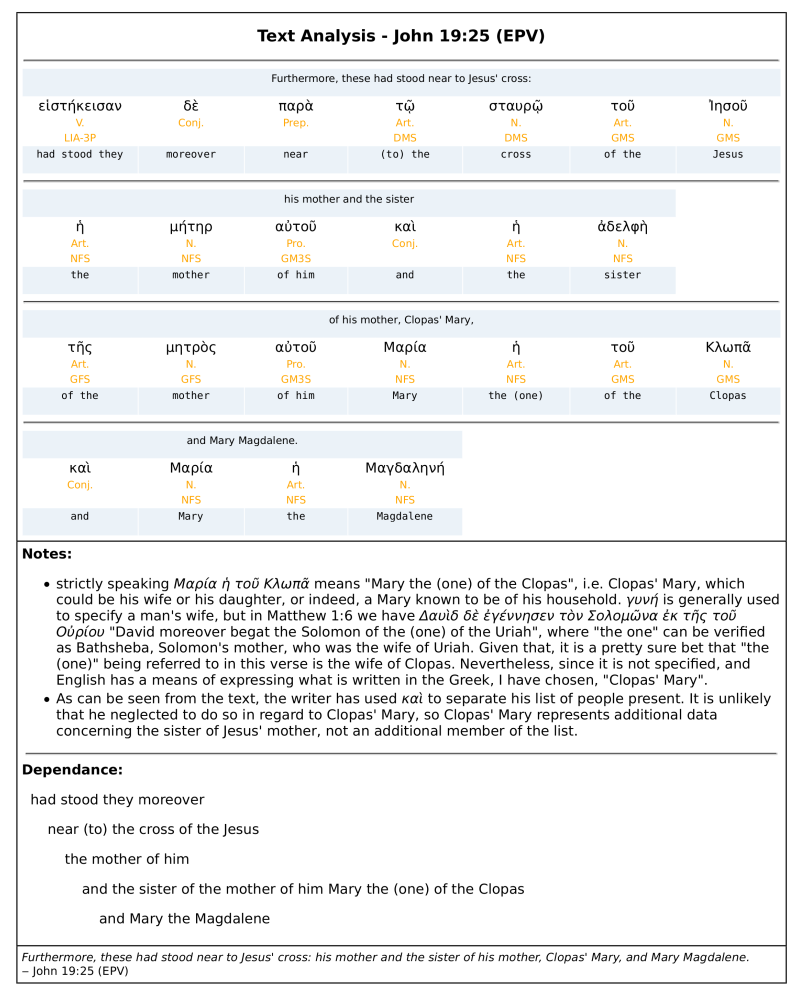 For there to be four woman in the writer's list of those present near Jesus' cross, one would have to assume that the writer was not consistent in his use of καὶ. Since there is no evidence to support such an assumption, then the conclusion should be that there were only three women present.

Now standing beside Jesus’ cross were his mother, his mother’s sister, Mary the wife of Clopas, and Mary Magdalene. (John 19:25 NET)

If I can count correctly that shows 4 women:

The other possibility is that there is no comma between mother's sister and wife of Clopas; that is to assume that this second Mary is the sister of Mother Mary. Since it is highly unlikely that someone would give same name to their daughters we must rule out this possibility and consider them different persons.

Only one member of her immediate family is alluded to in the NT, viz. her sister (Joh 19:25). This sister of the Virgin was most probably Salome, wife of Zebedee, and mother of James and John. We know from the other Gospels (Mat 27:56, Mar 15:40) that Salome was present at the Crueilixion, and it is quite in accordance with St. John’s manner to allude thus to his own mother without mentioning her name. The other opinion, that this sister was Mary ‘of Clopas,’ would (cf. Westcott, in loc., also Mayor, St. James, pp. xix–xx) ‘involve the most unlikely supposition that two sisters bore the same name.’ The family of the Virgin was connected in some way with Elisabeth (ἡ συγγενίς σου, Luk 1:36), but what the degree of relationship was cannot be known. According to a theory brought forward in connexion with the harmonizing of the two genealogies of our Lord, Mary was a cousin of Joseph her husband (art. ‘Genealogy of Jesus Christ’ in Smith’s DB [Note: Dictionary of the Bible.] ), but such a theory has little to recommend it. That her family was but a humble one may be inferred from her betrothal to Joseph ‘the carpenter,’ especially if there be any truth in the tradition as to the disparity of their ages.

Amongst the witnesses of the Crucifixion mentioned by all four Evangelists were, according to St. John, two sisters—Mary the mother of Jesus, and His mother’s sister. Though it has been argued that Mary the (wife) of Clopas (Μαρία ἡ τοῦ Κλωπᾶ) was the sister of the Virgin, it is now generally agreed that the interpretation of Pesh. (Joh 19:25), which inserts the conjunction ‘and’ between the words ‘His mother’s sister’ and ‘Mary of Clopas,’ is correct (cf., on the other hand, pseudo-Matt. c. 42: ‘… Jesus et Maria mater ejus cum sorore sua Maria Cleophae,’ where the reason given why two sisters should have the same name is that the first having been devoted to the service of the Lord, the second too was called Mary for the consolation of her parents). From a comparison of the names of the women who witnessed the Crucifixion, given by the first, second, and fourth Evangelists, the most likely conjecture would seem to be that by ‘the sister of his mother’ St. John meant his own mother Salome (see, however, Schmiedel’s art. ‘Mary’ in EBi [Note: Bi Encyclopaedia Biblica.] iii. 2969, which denies her identity either with ‘Mary of Clopas’ or with Salome; cf. also Edersheim, LT [Note: T Life and Times of Jesus the Messiah [Edersheim].] ii. 602, and Westcott, Gospel of St. John, ad loc.). If the identification by Hegesippus of Clopas with the brother of Joseph be correct, we have the interesting fact that this Mary, thus referred to by St. John, was closely connected with Jesus by the ties of family relationship (see Euseb. iii. 11, iv. 22). J. R. Willis.