I had always thought of it more as seeing God and truth through warped transparent glass or lens, but then Paul says "then face to face" and it doesn't seem to fit that "now/then". The Greek evidence may also suggest the poorly reflecting mirror.

For now we see [what?] in a mirror dimly, but then face to face. Now I know in part; then I shall know fully, even as I have been fully known. (ESV emphasis added by me)

What is Paul seeing poorly reflected now that he will see clearly one day?

Any clues within the text or in other Pauline writings and themes?

If we accept that the apostle Paul is referring to a mirror in 1 Cor 13:12, then what is being reflected?

The apostle Paul (as well as other Christians) behold the mirror and see the glory of the Lord.

In A Dictionary of Greek and Roman Antiquities,1 William Smith groups the nouns κάτοπτρον, ἔσοπτρον, ἔνοπτρον all under the same heading of "speculum," i.e. mirror.

18 But we all, with unveiled face beholding the glory of the Lord through a mirror, are transformed into the same image from glory to glory, even as by the Spirit of the Lord.

In 2 Cor. 3:18, the Christian with unveiled face beholds the glory of the Lord Jesus Christ through a mirror since he is transformed into that same glorious image by the Holy Spirit (the Spirit of the Son and the Father). Rom. 8:29 reiterates this when the apostle Paul writes that Christians are to be conformed to the image of the Lord Jesus Christ.2

This conformation to the image of the Lord Jesus Christ is progressive, not immediate. Thus, in 1 Cor. 13:12, the apostle Paul uses the word now (ἄρτι) to describe how the the immature (ἀτελής) Christian presently beholds himself "through a mirror" (δι᾽ ἐσόπτρου)3 "by a dark saying" (ἐν αἰνίγματι). In doing so, he only sees an obscure image of the Lord Jesus Christ, because the transformation is not yet complete; hence, the Christian is not yet mature (τέλειος).

By «ἐν αἰνίγματι», the apostle Paul evidently alludes to Num. 12:8 wherein it is written,

8 I shall speak to him mouth-to-mouth, by appearance and not by enigmatic sayings, and he saw the glory of the Lord. Wherefore then were you not afraid to speak against My servant Moses?

Moses saw the glory of the Lord because the Lord(=Yahveh) did not speak to him by enigmatic sayings (δ αἰνιγμάτων), but rather, mouth-to-mouth or face-to-face. On the other hand, our sight of the glory of the Lord is obscured because the Lord has spoken to us by an enigmatic saying (ἐν αἰνίγματι). What this αἴνιγμα is, Heinrich August Wilhelm Meyer explains:4 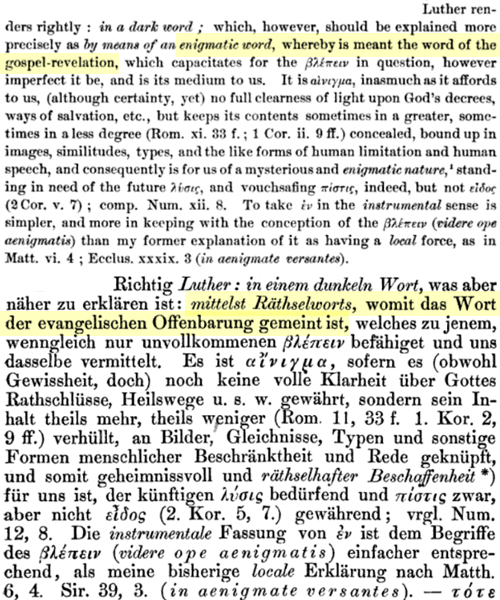 The immature Christian "knows in part" and "prophesies in part,"5 but the apostle Paul states that a time will come, which he indicates by the word "then" (τότε), when the Christian will fully mature and that partial knowledge and prophesying will be done away with.6 He uses the analogy of a child maturing into an adult as proof that one day the immature Christian (i.e., babe in Christ) will likewise mature and put away childish things.7 But, that time has not come, for the apostle Paul states that we "now behold through a mirror by a dark saying"8 but in the future ("then"), we shall behold the Lord and his glory face-to-face, just as Moses beheld Yahveh and his glory face-to-face.

This Greek phrase may be translated as,

But then I shall know just as I was also known.

The former verb ἐπιγνώσομαι is conjugated in the future tense, and the latter verb ἐπεγνώσθην is conjugated in the aorist tense. The former conjugation in the future tense refers to the future time, «τότε» ("then"), when the Christian has reached maturity (τελειότης). At that time, the Christian shall fully know God. The latter verb in the aorist tense refers to the present time, ἄρτι ("now"), which time period spans antecedently to the time of Christian conversion. During this time of immaturity and imperfectness (ἀτέλεια), the Christian is known by God9 although his own knowledge of God is incomplete. In the future, the Christian shall know God - completely - just as he is also known by God - completely.

3 Regarding the phrase «δι᾽ ἐσόπτρου», Heinrich August Wilhelm Meyer commented, "through a mirror; popular mode of expression according to the optical appearance, inasmuch, namely, as what is seen in the mirror appears to stand behind it."

There is a certain irony that in pondering Paul's teachings about how poorly we comprehend the things of God that we must muddle through the very scriptures that describe the very limits of our understanding! We, the few, the proud, the educated armed with electronic devices and millennia of commentary are still not much different from a child pondering quantum mechanics.

In contrast, seeing face to face is to see something as it is.

Paul is explaining the profound limitations of prophecy and all the gifts to remind us that they are simply crude tools for a limited purpose and for a limited time.

He says the same thing in a less technical and more human way but comparing the function of the gifts to children's toys. They seem so important to a child but the child grows out of them as his understanding becomes less myopic. He sees them for what they were; condescension. The parents, with understanding far beyond what the child is prepared to grasp provides an amusing and enticing mechanism for the child to be acquainted with the things of the grown up world. But when the child matures and knows as he is known he sets these things aside.

What the child "sees in part" and what we "see" in prophesy are crude representations of spiritual realities which will be displaced when we see God face to face and know as we are known.

Not the answer you're looking for? Browse other questions tagged greek pauline-epistles referent-identification or ask your own question.