Should Genesis 8:10 read “he waited” or “he waited anxiously”?

In Genesis 8:10 the first word in the MT is ויחל. The Biblia Hebraica Stuttgartensia (BHS) suggests emending to וייחל.

Everyone seems to accept the BHS and translate this as "waited" just as if the first words of 8:10 and 8:12 were the same.

The Masoretic Text (MT) reading suggests that Noah "waited anxiously" when the dove returned without finding dry land; this is consistent with the usage of חול in Judges 3:25 and Micah 1:12 and is also suggested in BDB (see Qal 2.d.). On the other hand, the BHS emendation identifies this with the more common word for "he waited" (יחל), also found in v. 12.

Rendering the first words of verses 10 and 12 identically seems to miss something very significant about the olive leaf in verse 11; when Noah saw this, he knew that there was dry land nearby. This relieved his mind from its previous state and then verse 12 means that he waited calmly for an additional seven days. The olive leaf made all the difference in Noah's state of mind.

The BHS emendation is not justified. In this regard, the Masoretic Text contains helpful hints in understanding ambiguous words. That is, the Masoretic Text correlates the verb in Gen 8:10 and Gen 8:12, but with a different verb. Based on these Masoretic tips (discussed in the next section), the best reading of this verse would appear as follows:

Gen 8:10
10 So he entered yet upon another seven days; and again he sent out the dove from the ark.

The Masoretic scholars did not take the modern view that this verb was חוּל (khül), which means to wait anxiously (Pual stem), but the verb חָלַל (khä·lal'), to enter upon (Hifil stem) with the waw consecutive, which comes from the root to penetrate and to defile, which leads to the idea of breaking or opening something, which is evident in the Masoretic Text.

There are helpful hints to understanding the meaning of ambiguous words in the Hebrew Bible. For example, In the Book of [First] Chronicles, the exact same word with the exact same consonants and vowel points appears in the following verse with comments in the margin and footnotes of the Masoretic Text -

1 Chr 10:3 (NASB)
3 The battle became heavy against Saul, and the archers overtook him;
and he was wounded (וַיָּחֶל) by the archers.

This verb is Hifil stem from the same verb חָלַל (khä·lal'), and so by the bow, (the arrow) "penetrated" because of the archers. On this particular page in the margin and at the bottom of the page in the Masoretic Text (Page 671 of the Codex Leningradis) appears as follows. Please click the image to enlarge. 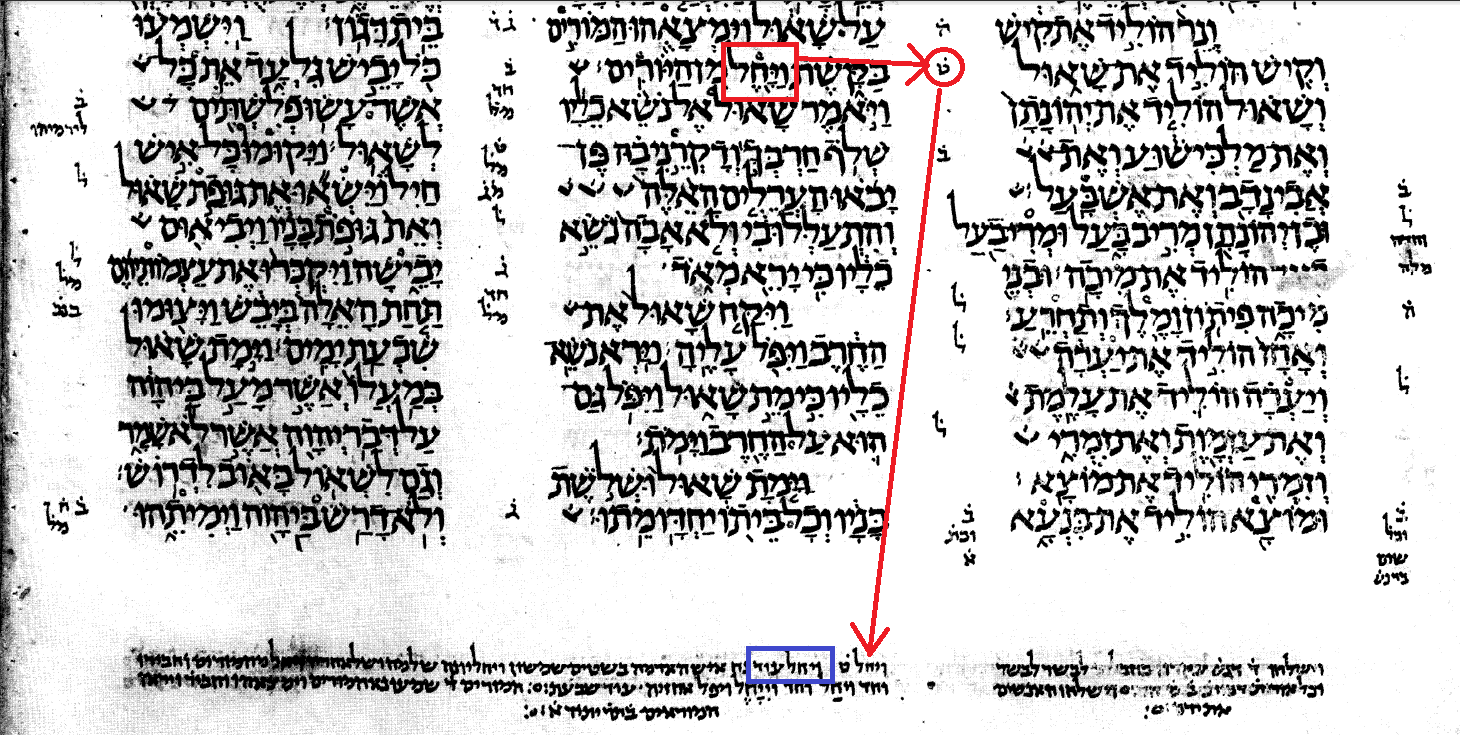 This particular verb with this particular vowel pointing occurs nine times in the Masoretic Text (signified by the term "ט̇"), and the first citation of the first instance of the appearing of this verb is Gen 8:10, which is indicated by the blue box (first two words of Gen 8:10) in the image above.

The image below is an amplified view of the same footnotes (from the image above). Since the Masoretes did not use a system of chapters and verse numbers (which Christians later developed) they had to use their memory! That is, they referenced Scripture "verses" by citing the very first few words of that verse, which implies that the Masoretes had vast portions of the Hebrew Scriptures MEMORIZED. For example, see the image below (and please click to enlarge).

The image below is the transcription of the same nine verses made by Gerard Weil, who was contracted by the editors of BHS to document all the Masoretic margin notes, footnotes, and end notes of the Codex Leningradis. 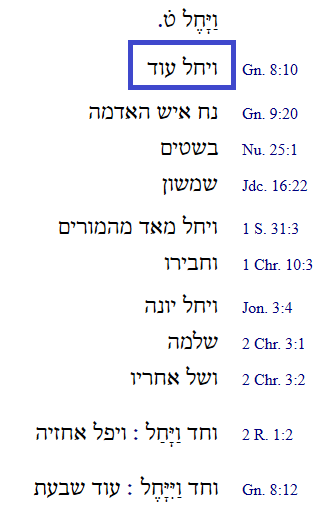 In summary, the Masoretic editors (who had command memorization of the Hebrew Scripture) viewed this grouping as the SAME VERB FORM of חָלַל (khä·lal'), Hifil stem. That is, they never "mixed and matched" identically written words (or homonymous words) that had different meanings, but only words with the same spelling and/or the same vowel pointing if and when such words were of the same "lemma". In this case, they lumped together the instances where the Hifil form of the verb חָלַל (khä·lal') appeared in the Masoretic Text with the same (or very similar) vowel pointing. In this respect, these Masoretic helpful hints are priceless when trying to understand the Hebrew Scriptures. In summary, the Masoretic reading follows other Jewish sources as well.

The Targumim
Finally, the Aramaic translations of the Hebrew Bible attest to the same. These translations appeared more than five centuries before the Masoretic Scholars appeared. For example, the Targum Onkelos appears as follows, which includes a variant reading to help convey the idea!

Please notice that the first words of Onkelos are "וְאֹורֵיך (ושׁרי) עֹוד" which means, "he prolonged (or allowed) another [seven days] ..." In other words, the Targum here leans more toward the idea of extending time by seven days. As noted above, the Masoretic Text takes the same approach, because the Masoretes saw the verb חָלַל (khä·lal') here.

The Targum Neofiti appears as follows:

Please notice that the first words of Neofiti are "ושרי תוב" which means, "he permitted again [seven days] ..." In other words, the Targum here leans more toward the idea of extending time by seven days. As already mentioned, the Masoretic Text takes the same approach, because the Masoretes saw the verb חָלַל (khä·lal') here.

That is, "Noah entered yet upon another seven days..."

Not the answer you're looking for? Browse other questions tagged hebrew genesis textual-criticism translation-philosophy masoretic-text or ask your own question.

5
Why the two paragogic nuns in 1 Sam 2:22?
4
Does a wasted, formless and void earth in Gen. 1:2 imply a previously existing world?