Why is Manasseh listed as one of the 12 tribes in Revelation 7?

I understand that Ephraim and Manasseh are the two sons of Joseph and that Jacob took them as his own soon before his death.

One of the customary twelve tribes is notably absent from this list: the tribe of Dan. Manasseh appears to be a replacement.

As to why the tribe of Dan is not mentioned, all I could find is this mysterious passage from Irenaeus, Adversus Haereses chapter 30, where the Antichrist is said to come from Dan:

This, too, the apostle affirms: "When they shall say, Peace and safety, then sudden destruction shall come upon them." And Jeremiah does not merely point out his sudden coming, but he even indicates the tribe from which he shall come, where he says, "We shall hear the voice of his swift horses from Dan; the whole earth shall be moved by the voice of the neighing of his galloping horses: he shall also come and devour the earth, and the fulness thereof, the city also, and they that dwell therein." This, too, is the reason that this tribe is not reckoned in the Apocalypse along with those which are saved.

According to the biblical accounts, Manasseh was one of the leading tribes that composed the nation of Israel, so Manasseh’s inclusion in Rev.7:4-8 is completely expected. The ‘tribe of Manasseh’ is named 39 times in the Hebrew Bible, usually as a ‘half-tribe’, together with the half-tribe of Ephraim representing the house of Joseph, their father in the biblical story.

The truly puzzling aspect of this list of “all the tribes of Israel” (v.4) isn’t Manasseh but the inclusion of the “tribe of Joseph” – a phrase found only here and Nu.13:11 in the whole Bible – and the exclusion of Dan and Ephraim. It’s also unusual to have Levi named among the ‘12 tribes’ which typically referred to territories. Importantly, the biblical author himself gave no explanation for his wholly unique list, his focus being instead on their numbers: 12,000 from each of 12 tribes for total of 144,000 of those who were ‘sealed’.

In the absence of evidence, many commentators offer various theological speculations about these substitutions and omissions (e.g. Ellicott, Benson Poole), supposing, for example, that the omitted tribes were more idolatrous than the others. Heinrich Meyer understood the phrase “Out of every tribe” [his emphasis] to suggest that none of the extant tribes, then listed, were excluded from John's vision of salvation. But of the author's particular intent in their itemization, Meyer concluded,

“In the succession it is only by an artificial subtilty which often passes over into pure trifling, that a consequent intention and a mystical meaning can be found.”

Summary
John's list is based primarily upon order of birth which includes Manasseh and Ephraim:

And now your two sons, who were born to you in the land of Egypt before I came to you in Egypt, are mine; Ephraim and Manasseh shall be mine, as Reuben and Simeon are. (Genesis 48:5 ESV)

But John modifies the list as needed to bring it into conformance with Jacob's vision:

Then Jacob called his sons and said, “Gather yourselves together, that I may tell you what shall happen to you in days to come. (Genesis 49:1)

This vision requires Reuben, Simeon, Levi, and Judah to be moved from their position by birth order. After a change is made, birth order is taken into consideration. The vision also offers John a reason to exclude the entire tribe of Dan from those sealed (see below). When Dan is dropped the next in line in order of birth is Manasseh, who John uses to replace Dan.

Judah's Preeminence
As a result of sleeping with Bilhah (Genesis 35:22), Rueben is to lose his preeminence:

3 “Reuben, you are my firstborn, my might, and the firstfruits of my strength, preeminent in dignity and preeminent in power. 4 Unstable as water, you shall not have preeminence, because you went up to your father's bed; then you defiled it—he went up to my couch! (Genesis 49)

As a result of killing the men of Shechem (Genesis 34:25-31), Simeon and Levi are to divide Jacob:

5 “Simeon and Levi are brothers; weapons of violence are their swords. 6 Let my soul come not into their council; O my glory, be not joined to their company. For in their anger they killed men, and in their willfulness they hamstrung oxen. 7 Cursed be their anger, for it is fierce, and their wrath, for it is cruel! I will divide them in Jacob and scatter them in Israel. (Genesis 49)

As a result of the changes to Reuben, Simeon, and Levi, Judah will be the preeminent tribe:

8 “Judah, your brothers shall praise you; your hand shall be on the neck of your enemies; your father's sons shall bow down before you. 9 Judah is a lion's cub; from the prey, my son, you have gone up. He stooped down; he crouched as a lion and as a lioness; who dares rouse him? 10 The scepter shall not depart from Judah, nor the ruler's staff from between his feet, until tribute comes to him; and to him shall be the obedience of the peoples. (Genesis 49)

Most of John's changes can be traced from the sons listed in order of birth then interpreting and applying Jacob's prophecies to rearrange the list for Reuben, Simeon, Levi, and Judah:

John placed Simeon and Levi in the center of the list by exchanging them with Gad and Asher. In doing so there are six before and six after and they now "divide" Jacob. Judah is older then Gad and Asher and Reuben loses preeminence to Judah.

Who is Included in Sealing?
Jacob's vision calls for Dan to judge his people:

“Dan shall judge his people as one of the tribes of Israel. Dan shall be a serpent in the way, a viper by the path, that bites the horse's heels so that his rider falls backward. I wait for your salvation, O LORD. (Genesis 49:16-18)

Just as some OT lists omit Levi because of their inheritance of service in offerings, John omits Dan because of their service in judging. That is, no one from the tribe of Dan was sealed because the entire tribe has the work of judging. Only a portion (12,000) of each tribe are chosen, so most in a tribe is not sealed. In the case of Dan (and Ephraim) 100% of these tribes are not sealed.1

To attain the number sealed of 144,000, either Manasseh or Ephraim must be added. Manasseh, the oldest, is taken. However, John did not drop Dan and add Manasseh in birth order (to the end of the list), he placed Manasseh directly into Dan's position and then adjusted for the older Naphtali: 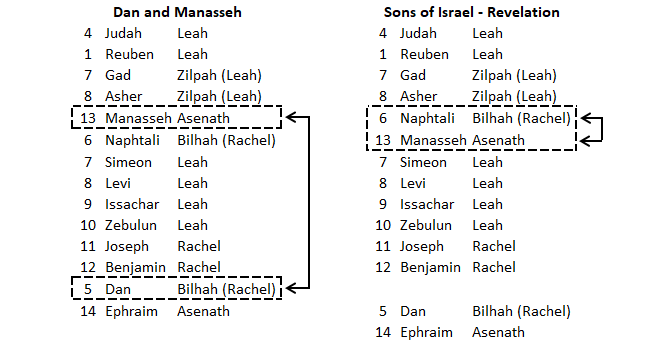 There are some arguments which could account for John's direct exchange with Dan:

There is also reason in Jacob's vision which John could use to justify pairing Manasseh and Naphtali:

18 I wait for your salvation, O LORD. 19 “Raiders shall raid Gad, but he shall raid at their heels. 20 “Asher's food shall be rich, and he shall yield royal delicacies. 21 “Naphtali is a doe let loose that bears beautiful fawns. 22 “Joseph is a fruitful bough, a fruitful bough by a spring; his branches run over the wall. (Genesis 49)

The sons immediately following "I wait for your salvation O LORD" are Gad, Asher, Naphtali, and Joseph. So when John replaces Dan with Manasseh and uses birth order to re-sequence them with Naphtali, John's list for these four tribes follows their order in Jacob's vision:

Conclusion
John replaced Dan with Manasseh, not Ephraim, because Manasseh was born before Ephraim.

1. The failure to be sealed is silent about the outcome of a final judgement. That the entire tribes of Dan and Ephraim went unsealed simply means they are in the same condition as everyone who was not sealed (including those of the other 12 tribes).

14
Why is the tribe of Dan missing from Revelation 7:5-8?
4
Does the woman in Revelation 12 go down to the earth from the heaven?
6
What is the “third woe”, in the Book of Revelation?
7
Rev 3:11 I come quickly vs I come soon
17
What significance does the word order of people, tribes, nations, and languages play in Revelation?
2
Inspires the prophets,spirits of the prophets, or Lord God of the Holy prophets-Revelation 22:6
2
What is the significance that the twelve tribes of the Son's of Israel Rev.7:4-8 differ from the twelve tribes of natural Israel Numbers 1:4-16
2
Who is the angel in Revelation 11:1-8?
2
Is Rev. 14:9-11 speaking of torment after death, or of torment while they are still living?
0
Are the two riders of the fourth horse in Revelation 6:7-8 kings of Egypt and Cush?