In Hebrews 1:2, what is the function of τούτων?

ESV Heb 1:2 but in these last days he has spoken to us by his Son, whom he appointed the heir of all things, through whom also he created the world.

but in the last days of these he has spoken to us by his Son, whom he appointed the heir of all things, through whom also he created the world.

ISTM that the idea is that Jesus arrived during the last of the days of God's speaking by the prophets:

Luk_16:16 The law and the prophets were until John: since that time the kingdom of God is preached, and every man presseth into it.

The time of God speaking in a son has arrived and the son has been appointed by God to be the heir of the law and the prophets. In so doing he establishes the ages of "law/prophets" and "son".

The English phrase “in the last days” is commonly used to translate the Hebrew phrase בְּאַחֲרִית הַיָּמִים (bĕʾaḥărît hayyāmîm) in the Hebrew Tanakh. This Hebrew phrase occurs 14 times in the Westminster Leningrad Codex (WLC), but it is translated a variety of ways in the LXX, as the following table demonstrates: 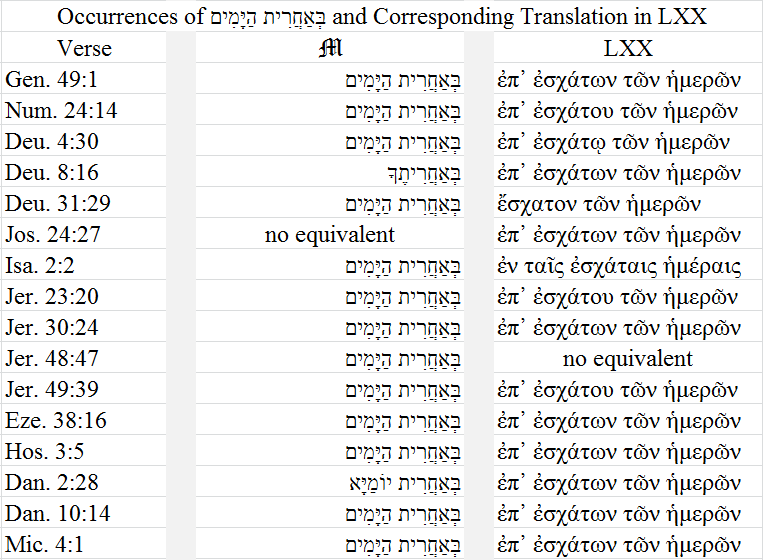 These Greek phrases are also used to translate a few other Hebrew/Aramaic phrases in the WLC, including:

The phrase “in the last days” occurs 5 times in most English translations, and it is used to translate a variety of Greek phrases, as the following table demonstrates:

The following is Constantin Tischendorf’s critical apparatus on Heb. 1:1:1

ἐπ’ ἐσχάτου τῶν ἡμερῶν does appear to be the favored reading based on the preponderance of early witnesses, according to Tischendorf’s critical apparatus.

Furthermore, in his commentary on Heb. 1:1, Franz Delitzsch wrote,2

Recall that both variants are used in the LXX to translate the Hebrew phrase בְּאַחֲרִית הַיָּמִים; thus, regardless of the favored reading, both mean (or at least, can mean) “in the last days.” Aside from that, the rest of the verse seems pretty clear. God formerly spoke by the prophets “in many parts” - many relevations before the last days - and “in many ways” - by similitudes, visions, dreams before the last days (cp. Hos. 12:10) - but now “in the last days,” the final revelation occurred by the Son who spoke only what the Father gave him to speak, but more importantly, the revelation is complete and perfect. No further revelation is needed, and no further revelation can be given, because the Son is God, and there can be no greater messenger (deliverer of a revelation) than God Himself (e.g., not Muhammad, not Joseph Smith, not Ellen White, etc.).

In the original question, it is said,

ISTM that the idea is that Jesus arrived during the last of the days of God's speaking by the prophets:

That is quite contrary to the sense the author conveys, for he certainly delineates time into two revelatory eras, the past (πάλαι) in which God spoke to the fathers by the prophets, and the present (from the perspective of the author), “these last days” (ἐπ’ ἐσχάτου τῶν ἡμερῶν τούτων), the eschaton in which God spoke by His Son. As Lünemann commented, ἐπ’ ἐσχάτου τῶν ἡμερῶν τούτων is in antithesis to πάλαι.3