Disclaimer: I don't know any foreign languages except Pig Latin. This is probably a dumb question, but...

In Koine, I believe "logos" is a masculine noun. Pronouns for "logos" such as Οὗτος are likewise masculine and rendered "he", etc. in English translations. Linguistically though, if the context suggested that "logos" were a thing instead of a person wouldn't it be correct to translate as "it"?

I notice for example that "pneuma", which is neuter in form is made to agree with "he" here:

Joh_16:13 Howbeit when he [ἐκεῖνος, "that one", masculine], the Spirit [neuter] of truth, is come, he will guide you into all truth: for he shall not speak of himself; but whatsoever he shall hear, that shall he speak: and he will shew you things to come. 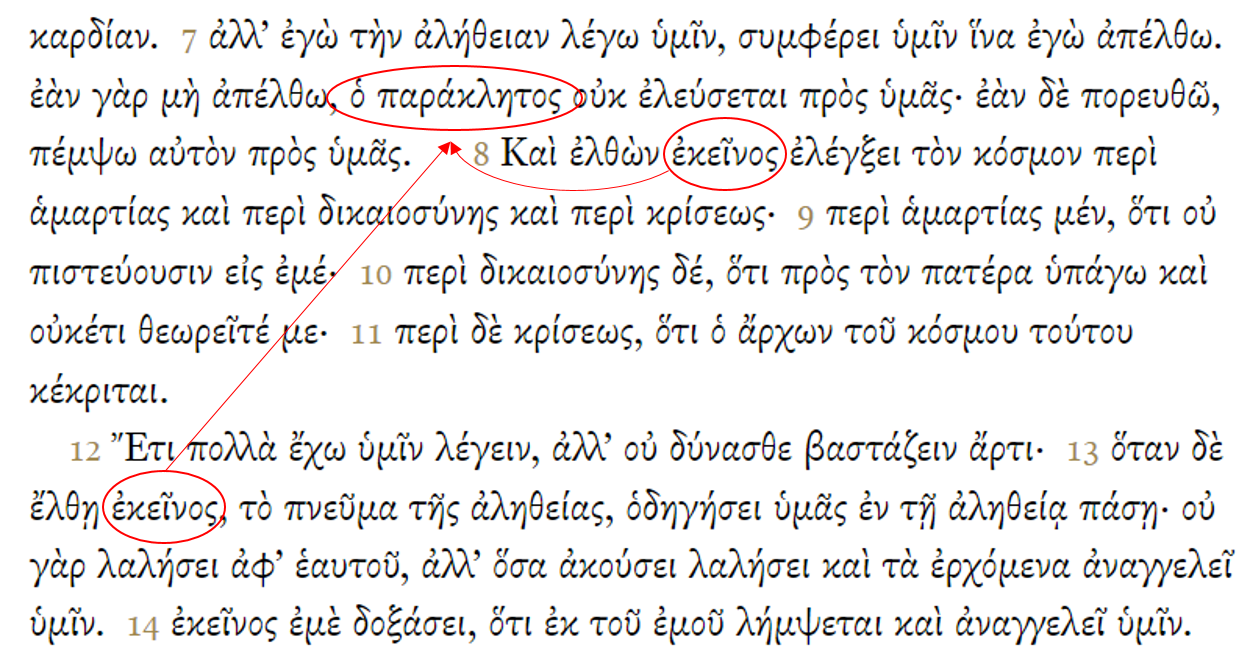 A few pronouns occur throughout these 3 verses:

Although οὗτος is declined in the masculine gender, some might assume that "the word" (ὁ λόγος) is a person, but οὗτος is simply agreeing with the grammatical gender of its antecedent, ὁ λόγος, a grammatically masculine gender noun. As such, unless it is absolutely certain that ὁ λόγος is referring to an animate object with gender (e.g., a male person), then the pronouns that refer to it would be translated by the neuter gender English pronoun "it."

The Personality of ὁ λόγος

The personality of ὁ λόγος is evident when we read that ὁ λόγος was θεός. Since only Yahveh, the creator, is θεός by nature, and ὁ λόγος must be θεός by nature because everything was created by means of ὁ λόγος (which must exclude ὁ λόγος from being created since something that does not exist cannot be used as the means by which it is created), then ὁ λόγος must be Yahveh, and thus a person. Therefore, it would be permissible to translate the pronouns οὗτος and αὐτοῦ by the English masculine gender pronouns "he/him" to accord with the personality (i.e., natural gender) of ὁ λόγος.

I agree with everything about Simply a Christian's answer except for the personality of ὁ λόγος. My answer is that οὗτος should be translated "it" and that ὁ λόγος does not correspond to a person, but rather "God's divine reason".

There are a few verses that seem to indicate ὁ λόγος is a person. Rather than look at each verse in detail, I will provide links from other SE questions that sufficiently explain why this is not so.

Based on this answer, a more appropriate translation would be...

The logos was not itself God, but it is God's logos, and therefore divine.

"And the Word became flesh, and dwelt among us, and we beheld His glory, glory as of the only begotten from the Father, full of grace and truth." NASB

According to this answer, "became" and "dwelt" are in the past tense because the "incarnation" was a one-time event. However, if the logos is not a person, but rather a concept, then the logos becoming flesh and dwelling within us would definitely be a universal action. This verse should read...

And the logos becomes flesh and dwells within us, and we behold the glory of it, a glory as of an only begotten of a father; full of grace and truth

(Notice "only-begotten" and "father" do not have a definite article. This is a simile rather than a direct statement.)

So if the logos is a concept rather than a preexisting divine person, what does this have to do with the human Yeshua? The answer is in John 1:30...

Yeshua came "on behalf of" the logos. He represents the divine reason because he was a perfect human being, upholding the Law and will of God in all he did.

Linguistically though, if the context suggested that "logos" were a thing instead of a person wouldn't it be correct to translate as "it"?

It is a misconception that a living thing or a person has to have either "he" or "she" in English, and not "it". For example, the demon or the evil spirit in Matthew 12:45 and Luke 11:26 is translated "it", in the modern English translations. All the English versions until KJV and most others until the end of 20th century, translated the Holy Spirit as neuter (which/it). See Romans 8:16, 26; 1Peter 1:11. See this article by Will Kinney, in defense of KJV using "it" for the Holy Ghost.

Rom 8:16 KJV The Spirit itself beareth witness with our spirit, that we are the children of God

and only a couple of modern translations follow the conventional English Grammar, such as NABRE and NTE of N. T. Wright. These are rebellious ones which go against the new English versions.

NTE: When that happens, it is the spirit itself giving supporting witness to what our own spirit is saying, that we are God’s children.

The reason why almost all English translators, both old and new ones, use "he" for the Spirit in John 14 and 16, is to maintain consistency of pronoun: masculine Helper, and neuter Spirit. The direct object is the masculine Helper, so they avoided translating Spirit as "it", because the Spirit is another name for the Helper. Except maybe a few which translated the spirit as "it", like SLT John 14:17 The Spirit of truth; which the world cannot receive, for it sees it not, neither knows: and ye know it; for it shall remain with you, and shall be in you.

NTE clarifies that the "he" in John 14:17 is for the helper, not for the spirit:

NTE: This other helper is the spirit of truth. The world can’t receive him, because it doesn’t see him or know him. But you know him, because he lives with you, and will be in you.

Grammatical gender as agreement or concord
Agreement, or concord, is a grammatical process in which certain words change their form so that values of certain grammatical categories match those of related words. Gender is one of the categories which frequently require agreement. In this case, nouns may be considered the "triggers" of the process, because they have an inherent gender, whereas related words that change their form to match the gender of the noun can be considered the "target" of these changes

In John 1:32, the dove is translated "it" in most of the versions, but only a few like the AMP, NKJV, NASB use "he" for the Spirit. The evil spirit in Matthew 12:45, Luke 11:26 and 1 Kings 22:22 is translated "he", in the old versions, because the person in the context is indicated as a demon Beelzebul (masculine) [Luke 11]. So we assume that all evil spirits are assumed as demon (masculine) by the old versions. Similarly, the context shows the Word in John 1:1-3 as a living person, namely Jesus. The translators avoided the inconsistency of neuter becoming masculine, for clarity or consistency. I am not aware of the specific explanations given for this from the translators, maybe the old Bible versions contained footnotes explaining this.

The reason why in English, the pronoun can be changed to conform to the related noun (the neuter word is masculine) is because English has very simple or weak declension. It does not require the strict declension of determiners, like article, pronouns and adjectives, to conform to the gender and case of the noun.

Declensions may apply to nouns, pronouns, adjectives, adverbs, and articles to indicate number (e.g., singular, dual, plural), case (e.g., nominative case, accusative case, genitive case, dative case), gender (e.g., masculine, neuter, feminine), and a number of other grammatical categories. In Modern English, the system of declensions is so simple compared to some other languages that the term declension is rarely used.

This does not change the fact that the new English Bible versions go against the conventional grammar rules of English, in rendering the gender of personal nouns, for reasons we can only speculate. The gender of the words in Greek, in this case, is irrelevant because in translation we do not follow the grammatical gender of the original language and render it the same way in the target language. It would destroy the grammar of the target language. However, many languages wrongfully follow the new English version's grammar to make the Holy Spirit masculine, when in fact their language requires that it should be feminine. Example Urdu, Hindi, and likely all the hundreds of languages of India, and possibly many other languages of the world, which is truly a global linguistic disaster created by the Bible Societies or translation committees.

75
In John 1:1c, should the Greek word θεὸς be translated into English as “a god” or “God”?
2
In Hebrews 1:3, to which "purification for sins" does the verse refer?
2
Why does the translation of the pronoun for light change within John 1?
2
Pronoun implication about Logos in John 1:1-5
1
Translation of the aorist indicative in John 1:14 versus 1 Peter 1:24

7
Should different but synonymous words be translated differently?
7
Why do some translations say "translated Dorcas" in Acts 9:36?
7
How to interpret neuter adjective “one” in John 10:30?
4
Should John 1:18 be translated differently?
4
Explain "apart from him" in John 1:3
3
Who is, or are the correct referent(s) of the pronouns in John 1:3-4?
2
Are three distinct persons mentioned in John 14:26?
12
If Jesus is God, how can we make sense of Him calling the Father "my God" in John 20:17?
1
Does John 14:26 explicitly use masculine terms for the Holy Spirit? Do other verses?