References to Codex Siniaticus etc in a Commentary

What would be a good way to refer to Codex Siniaticus, etc in a Commentary on Hebrews? Society of Biblical Literature Style book does not cover standard abbreviations for this. And I assume some who read the commentary will not be familiar with textual criticism. So if there are abbreviations, I'll need to include them in a table. (I am doing the copy editing - the author recently passed away.)

for Siniaticus: LXXא (with the alef as a superscript)? Or Codex Siniaticus? or?

What about if several codices are mentioned - put them in the superscript font after LXX: separated by commas?, or slashes? Or spell them out?

How about the Psalter Gallicanum? would one spell it out - or what is the proper abbreviation?

The most common seems to be Tischendorf's who (as you seem to know) assigned the Papyrus the Hebrew letter א, so LXXא (For Septuagint manuscript א) might be a decent choice, however the translators of the New English Translation used Í or 01. Some simply spell out using Latin characters the pronunciation of the Hebrew character א as "Aleph". Van Soden abbreviated it as δ2.

I would suggest that the proper way to abbreviate this however is simply not to and to spell out for a few reasons. First, using abbreviations makes the commentary more unruly and less accessible to the uninitiated. Limiting the benefit of a commentary to some academic who is capable of deciphering the often undecipherable alphabet soup is unnecessary and projects an attitude of superiority.

Even for those who are capable, this still makes the text less readable. For example, it is mentally disruptive to me and requires some effort to have to swap "LXX" in my mind for "Septuagint" every time I encounter the abbreviation and often derails my train and flow of thought. Furthermore, at this site, we believe that answers should teach at an expert, university level, but that teaching should be by doing. It is expected that most participants will be interested amateurs. While we welcome amateurs on this site, that doesn't mean that we want amateur-level answers - and we expect them to be postgraduate university level. However, we are of the opinion that amateurs are capable of learning more by the use of expert sources and reproducing expert knowledge. This is made far easier without the unnecessary use of jargon which needlessly alienates and restricts non-professionals who might otherwise be able to participate.

Take for example the Hebrew and Aramaic Lexicon of the Old Testament (which I could have abbreviated as HALOT and chose not to...): 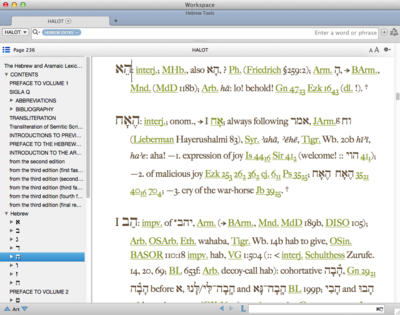 This entry includes numerous abbreviations, many of which are nonsensical to me. Fortunately, the software pictured will provide an expanded explanation of the abbreviation when you mouse-over it, and without it, I would often be lost. This could easily be accessible to many more people by simply writing out many of the abbreviations.

So in short, while the standard abbreviation should probably be א, the best practice (in my opinion) is to not abbreviate manuscript names.

Not the answer you're looking for? Browse other questions tagged septuagint or ask your own question.

2
Why does the Septuagint omit Isaiah 2:22 when it's in the Dead Sea Scrolls and Leningrad Codex?
1
What is the accurate English translation of Judges 8:18 (Codex Alexandrinus)?
1
When is the Septuagint containing manuscript “Codex Sinaiticus” dated?